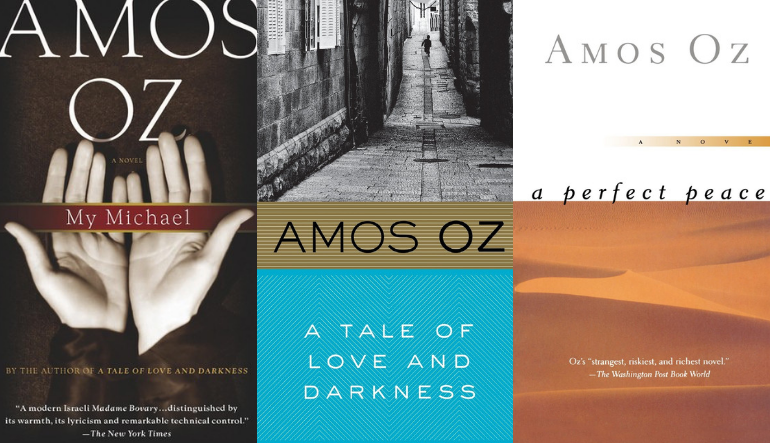 There is an episode in A Tale of Love and Darkness, Amos Oz’s autobiographical account of his childhood in 1930s Jerusalem, that has remained dear to me ever since I first encountered it, like an heirloom locket I will never remove. Recounting his childhood visits to the home of S.Y. Agnon—who just happened to be a neighbor of his beloved great-uncle—Oz writes,

That is the way [Agnon’s] image was engraved on my childhood memory and that is the way I remember him today: a man swaying in the half-light, with three or four separate shadows swaying around him as he walked, in front of him, to his right, behind him, above him, or beneath his feet.

This description of Agnon as a man with three or four shadows–an epithet that recurs throughout the book—speaks to what I consider Oz’s greatest strength as a novelist.

Oz, who died of cancer this past December, was arguably Israel’s greatest living writer—his awards and accolades included the Bialik Prize, the Israel Prize, the Goethe Prize, and the Legion of Honor. Over the course of his long career—the early years of which were spent haggling with his kibbutz to give him one day off work to write, then two, then three—he produced an œuvre that spanned fiction and nonfiction, short-form and long-form, writing for adults and books for children. His body of work also encompasses a breadth of styles. A Perfect Peace, probably his most accomplished novel, achieves the emotional quality of a windswept desert plain as it relates Yonatan’s repeated failures to achieve escape velocity from the claustrophobic kibbutz where he has spent his whole life; Fima, a couple-days-in-the-life-of story of the bumbling titular character sowing disappointments and failures left and right, brims over with warmth and wit. With Oz’s death, the world has lost not merely an author of extraordinary talent, but one whose singular ability to imagine other minds and modes of being bespoke a capacity for empathy to which all writers might aspire.

Reading and rereading Oz’s work, what strikes me each time is the treasure horde of gimlet-eyed descriptions waiting to be unlocked in every book. In Black Box, one character’s house is said to be “built like a drunkard’s wager”; in A Perfect Peace, Oz compares “a sickly-looking gibbous moon…caught in the boughs of an olive tree” to “Absalom in his oak” or “a pale Jewish fiddler trapped by a band of peasants in some distant land of exile.” Where Oz’s descriptions shine brightest, however, is when they are turned not on landscapes or buildings but on the figures who populate them. Alex, one of the central characters of Black Box, is said to have possessed as a boy “childish wolfishness which gave [him] the air of a wristwatch that had lost its glass”; an arriviste character from the same novel has the strained laugh of “a waiter who has gone up in the world.” Mr. Nehamkin from a story in The Hill of Evil Counsel looks “as though he found his body a tiresome burden, as though he was forced to drag it around with him from place to place against his will, like a man carrying a heavy bundle that was gradually coming undone.”

Collectively, descriptions like these—and the joy that Oz seems to take in noting how someone might close their eyes like “a medieval castle raising its drawbridge and dropping the portcullis” (Black Box) or “w[ear] galoshes that looked like twin black warships” (The Hill of Evil Counsel)—teach readers to attune themselves to moments and mannerisms that might easily have passed by unnoticed in the great flow of life. Reading these lines–and above all the description of the multiple-shadowed Agnon—one becomes aware anew of the reservoirs of interest and even beauty in frequently neglected aspects of human experience. To read Oz’s work is to grow acquainted with a soul who was deeply curious about the world and its varied connections—between people and people, people and creatures, people and things, and people and land. Oz’s ability to find the extraordinary among the mundane challenges his readers to do the same, to see the poetic possibilities in the shape of an ear or the angle of a mouth. Oz viewed the world as through a jeweler’s loupe, with a keen eye for its faults and flaws but also for its moments of beauty, when cloudiness yielded to clarity and let the light shine in. This ability to see through, see anew, and see differently is a kind of humanism, a way of pushing past prepackaged ideas and upholding faith in the complexity, uniqueness, and fundamental value of every person.

If Oz had a gift for gemlike descriptions of the physical world, his writing also reveals a rich ability to observe and reflect the human mind in all of its unevenness and illogic. In a deeply moving episode from Black Box, Ilana visits her senile ex-father-in-law at a nursing home and sits in silence as he delivers a monologue that swims between reality and unreality as the present mingles with memory, invention, and crumbs of Dostoevsky. My Michael, the story of a young housewife in Jerusalem whose disappointments in life slowly grind her down into depression, skillfully and sympathetically captures the ways in which people persist in making decisions they know are counterproductive. A Tale of Love and Darkness, which repeats and reworks key phrases and descriptors like a theme being varied in a fugue, mirrors the circular path our recollections take. So, too, does the meandering way in which that book’s narrative unspools—with reminiscence blooming naturally into reminiscence regardless of its proper position on a strict linear timeline—seem like a much more faithful evocation of the forking paths of human memory than a conventional structure would allow. Oz sought not to make the crooked straight but to reflect (often lovingly) upon the ways in which the contours of our lives are formed by the places where rationalism fails us.

Shortly after finishing A Tale of Love and Darkness, I resolved to make it a daily writing habit to craft a character sketch, an attempt in my own pale way to imitate Oz’s seemingly effortless esquisses. Some of these efforts were simply drawn from my imagination; others were inspired by works of art or the faces of loved ones or the nervous tics of strangers on the train. The daily ritual of searching for literary beauty in the tilt of a head or the catch of a breath or the particular manner a person has of clearing their throat has altered and enriched the way I view the world around me. When I think of what Oz’s books have given me, then, what I think of most of all is not any factual learning, not the joy gotten from any particular plot, but simply this—the capacity to look and look again and look deeper, to gaze past banalities and see the four separate shadows splayed across the floor.

Tags:A Perfect Peace, A Tale of Love and Darkness, Amos Oz, Black Box, My Michael, The Hill of Evil Counsel