Home
»
Uncategorized
»
Believe in the Gimmicks: On The Squared Circle and the World of Professional Wrestling

I was caught quite off guard last month when my Twitter feed—usually the domain of snarky chatter about baseball, basketball, and football—was suddenly overtaken by a flood of breathless comments about wrestling. No, not the Greco-Roman, Olympic-style, singlets-and-cauliflower-ear style of wrestling. I mean the wrestling with clotheslines and body slams, giant oily muscles, and bleached hair and Speedo-sized costumes. The kind of wrestling with feuds that portend piledrivers to one’s opponent. 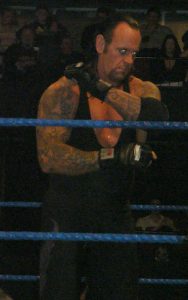 The Undertaker preps for a signature Tombstone Piledriver.

My first thought was, “Oh, we’re still doing this? This still exists? People still actually watch wrestling, with passion and on Pay-Per-View?” Then I remembered that my Twitter feed is in fact full of (ostensibly) rational adults. These people know that Santa Claus, the Easter Bunny, and professional wrestling are all fakery—and yet here are they are placing cookies by the hearth on Christmas Eve.

So out of curiosity, I’ve spent the past month steeping myself in the world of professional wrestling trying to figure out why, exactly, people watch it. My journey has taken me to dark and uncharted corners of YouTube, where grainy matches lifted from VHS tapes lay in wait. My journey has taken me to the USA Network, that dusty and unwanted corner of your cable package, where Monday Night Raw is broadcast. I have subscribed to the weekly podcast of “Stone Cold” Steve Austin (one of the all-time greatest and greatest-grossing wrestlers, a star of the nineties who is now cheerfully filming explosion-filled action movies and generally farting around in his early retirement).

And most importantly, for my Ploughshares audience, I have read The Squared Circle by David Shoemaker, a history of wrestling that starts all the way back at the turn of the twentieth century.

Professional wrestling is a beautifully American invention, and a reflection of a beautifully American impulse: wrestling matches at carnivals and fairs of the early 1900s were simply too boring for audiences to watch—they were uninterrupted hours of stalemated, ground-bound grappling. Promoters discovered that a match with a preordained result can provide the sorts of thrills, spills, and mercifully abbreviated running time that an actual competition between two wrestlers simply cannot. Add in a few scheming entrepreneurs over the decades, themselves intoxicated by the possibilities of ever-ubiquitous television, and it’s not too hard to see how wrestling evolved into the colorful, brash, heavy metal spectacle that it is today.

While the wrestling stars of the 21st century no doubt put on a much more thrilling, higher-flying show than these early performers, their names have, bewilderingly, become much blander: The Rock, John Cena, CM Punk, Triple-H, Kane, Big E, Daniel Bryan. And yet it is modern wrestling, of all the athletic endeavors, whose identity is perhaps closest to the creative and literary arts.

Like all wrestling organizations, the WWE—which has earned itself a de facto monopoly over the wrestling world thanks to its superior production values—employs a stable of dedicated writers to script all of the matches and feuds amongst their wrestlers. The WWE’s writers have, in essence, the same assignment as the writing team of a more conventional, episodic TV show, be it Mad Men, Arrested Development, or a soap opera: figuring out which combinations and permutations of the available characters will produce the maximum friction and intensity if they bump up against one another. (Unlike a conflict between Don Draper and his latest mistress, of course, a somber scene hashed out in hushed tones over cocktails, conflicts between wrestlers are most likely to reach resolution via climbing up on the top rope of the ring and administering a flying body slam.)

Moreover, just as Jon Hamm must transform into Don Draper for Mad Men in order for the show to get rolling, it is the character (or “gimmick”) that each wrestler adopts that fuels wrestling’s plots, and that inspires the crowd to cheer and/or boo at their entrance. Wrestling’s championship belts are bestowed on the most beloved gimmicks, the character’s victory cueing triumphant, cathartic release for the audience and gimmick alike. If this supreme emotional investment in the prewritten success of a fictional resident of a fictional world sounds silly in the context of wrestling, well, um, it is these exact factors that have found us all wired and tearing through a book at 2 a.m., work in the morning be damned.

Often, the same wrestler will try on multiple gimmicks in search of an alias that triggers emotional resonance. Steve Austin found his career at a dead-end after a string of uninspired pretty-boy gimmicks: as “Stunning” Steve Austin, as “The Ringmaster,” as half of the Hollywood Blonds tag-team. Like a character getting written off of a TV show, Austin found himself shuttling between small-time wrestling organizations, performing on the bottom half of the cards.

Finally Austin cut off his long locks in favor of a totally shaven head and became “Stone Cold” Steve Austin, a blue-collar everyman from rural Texas. Stone Cold wore a minimalist, black costume, chugged beers after his victories, and eschewed the flexing and preening of conventional wrestling introductions in favor of angrily stomping down to the ring, as if his time were already being wasted. The character was a raging success, stadiums full of fans getting reliably whipped into a frenzy the second that his intro music—presaged by the sound of shattering glass—crunched through the speakers.

Austin’s long-standing feud against the WWE’s suited corporate leaders (resulting in frequent administration of the “Stone Cold Stunner,” Austin’s signature finishing move) was the crown jewel of Austin’s residence at the top of the wrestling world in the late nineties and early aughts—although, of course, Austin was playing along with a script written by the same corporate entity.

This brings me back to the people on my Twitter feed, who—along with untold thousands of wrestling fans around the world—were entranced by the thirtieth annual WrestleMania, the WWE’s biggest and brightest night, viewable only on Pay-Per-View or in the sold-out Superdome in New Orleans. Even though raggedy Northwestern everyman Daniel Bryan triumphantly won the World Heavyweight Championship over the boulder-shaped Triple-H, the uproar centered around the following finish of an undercard match:

You see, the loser of this match, The Undertaker, had won all of his previous twenty-one matches at WrestleMania, a streak that had gained considerable lore before being broken here by the rock-fisted brute Brock Lesnar. While the shock on the faces of the victorious Lesnar and his manager (Paul Heyman) is scripted acting performance, the gobsmacked reactions from the various audience members are definitively real, genuine, candid.

The seeds for this match had been continuously sown by the WWE for decades. In an industry built on hyperbolic theatrics, no piece of theater was more iconic than The Undertaker’s overwhelming, multimedia entrance into the ring. Cued by the darkening of arena lights and the ominous intoning of a bell, Mark Calaway of Houston is wordlessly and totally transformed into The Undertaker, hailing from Death Valley:

On the one hand The Undertaker’s introduction is a lot of trouble to go through for a scripted exhibition that will culminate a single three-second pin. On the other hand, this introduction represents the most essential thing about wrestling, the thing that inspires such loyalty from wrestling fans—and it’s clear that the long-term, carefully modulated “character building” accomplished by such introductions is a key ingredient in the spell that the WWE casts on its audience. The introduction establishes of a setting where it is safe for us to suspend our disbelief, to momentarily stow our jaded knowledge that everything in the ring is myth.

And so once more I am surprised by wrestling. I’m surprised because I’m slowly, surely feeling myself get hooked in by the WWE’s biggest stars of 2014, increasingly satisfied by the chokeholds and insults and folding chairs to the noggin that they distribute to one another, live on TV. I’m surprised because the spell that wrestling casts on its audiences turns out, ultimately, to be the same exact spell that all good fiction casts on its audience.