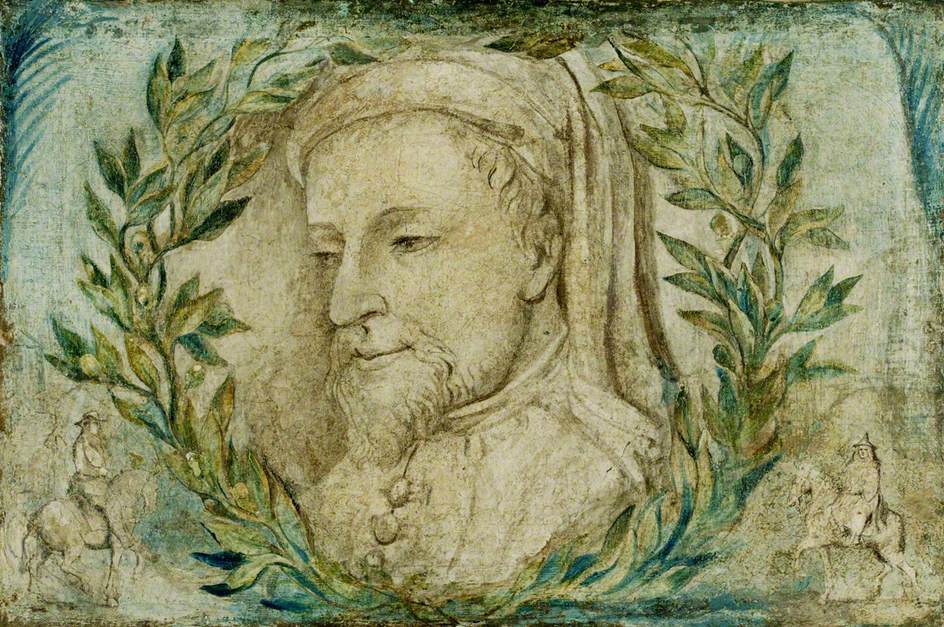 According to my medievalist spouse, Geoffrey Chaucer entered into the prime of his literary career, which has spanned the intervening five centuries, around the age of 40.  Presumably he was writing some things before that, and we can quibble about whether to count as major The Book of the Duchess (medievalist spouse:  “are you mad?  That’s hugely major, and it can be dated to around 1368!”) or The Parliament of Fowles (medievalist spouse here shows signs of breaking into tears.)  But until his early forties, Chaucer’s day jobs (as an eerily successful diplomat and a customs agent, among others) lay elsewhere.  Troilus and Criseyde, the first work that’s really fun for a non-medievalist to read, was written in Chaucer’s forties.  The Canterbury Tales were composed during the final decade of his life.

Lady Gaga aside, I’m remembering Chaucer on my gentle readers’ behalf, on the off chance that some of you may not be quite as young as you once were; or that some of you may have come to writing rather later in life; or  even that some of you may find way too much of your time taken up by things not immediately related to your artistic endeavors:  your day job, its service requirements, the sudden demands of your students, if you have some, your political activism, your family, a desire to eat local food that slowly but inevitably pulls you down to cooking, freezing, and even…canning.  (This last, of course, is purely hypothetical.)  What Chaucer’s career says to me is, among other things, that we don’t all have to hit the MFA programs young if we want to succeed (though often enough it helps), we don’t all have to protect the work at the expense of our day jobs (though I often wish I did more of that), and that our day jobs may also be valuable uses of our talents.  Maybe they even help us with our other talents.

I don’t want to say, however, that it’s the same coming to a thing in one’s forties as it is starting in the cradle, and I can see this when I walk into writing workshops.  The signs include furrowed brows, copious notes (in the best case, at least) and occasional wails.  “But how do you know those are anapests and not a pyrrhic, a trochee, another pyrrhic, and a…something?”  or “I can’t hear any more stress on one syllable than another!  Are you sure there’s a difference?”  No answer here seems gentle enough; rubbing it in that one was lucky enough to start scanning before one was into double digits doesn’t make listeners feel warm and glowy (especially if this luck still doesn’t translate into fame or fortune of the more usual variety.)  Mostly I remind beginners, especially very-adult beginners, that there really is some knowledge and practice associated with this job, and leave it at that.

For them, for you—for those of you who have come to this later and maybe aren’t finding Chaucer a total comfort in Lady Gaga’s world—I’ll share something I’ve started in midlife:  whitewater kayaking.  My spouse and I began kayaking a couple of years back, unknowingly, by renting inflatable rafts and kayaks (“ducks”), then graduating to more rigid sit-on-the-top versions, and finally, after calculating how much money was going into rentals, realizing that it was time to actually buy a boat, a journey narrated in more detail over here.

The thing is, whitewater kayaking isn’t something one gets great at right away, even if one’s used to other kinds of boats.  It’s not that the learning curve is so brutal:  you can choose easier rivers and mostly trust yourself to stay afloat; and if you do turn over (which whitewater kayaks commonly do), you don’t have to have your kayak roll absolutely perfect before you can tear off the skirt and swim like the proverbial otter (at least if otters scream like little girls and chase their paddles for miles downriver.)  You can enjoy a kayak quite a lot without very much knowledge or skill (which in my case is a good thing)…and this is fine.  Really:  you don’t have to plumb the waters of regular, conscious form, technical expertise, or literary history to have a really good time with your poetry workshop.  You don’t have to despair because your roll, on the occasions when you actually do get upright again, looks like the work of a bison in a dust wallow.  If you put in enough hours and find some good instructors, you’ll probably learn as much as you want or need to; and if you don’t, there are still lots of easy rivers.

You don’t have to despair; but you don’t have to mistake the milder bits of the Little Tennessee for the Ocoee, either, or convince yourself that you’re naturally great.  In fact, it might be that as I was coasting gracefully (okay, thrashing with moderate efficacy) down a not-too-challenging rapid this week, one of my fellow novices was to be observed huddling in fast-ish water, holding onto a rope; he or she had tumped over, lost boat and paddle, and adopted a mien of not-so-happy.

For me, though, this was a thrill, compounded equally of “someone more novice than me, wow!”, “I get to use my rope bag, extra wow!”  and, a distant third, “maybe I can be of some help here.”

It turned out that I could; the person on the right end of the rope asked if I could go have a look for the paddle.  The paddle was nowhere to be seen, but I did spot the boat, upside down in an eddy.  Okay!  Catherine to the rescue!  I ferried gamely across the rapid (only just not missing the eddy), beached my craft on a mud bottom, and waded in to liberate the boat.  After some shoving and rocking and tipping and hauling and more tipping and drain-plug removing and heaving and upright-standing (in none of which did the mud bottom prove helpful), lo:  victim’s kayak was beached and drained.

The crucial step, though, was to get the boat back across the river to its proprietor, and this was the really thrilling part:  I’ve only retrieved one kayak in my brief river career, and some goofing as to where I attached it to my own noble craft meant that I hauled a swamped boat that I couldn’t drain across the current sideways, so that it kept flipping back over and impeding progress.  Like some poems, the process worked, though you couldn’t say it did so with beauty, grace, or casual chic.

But this time, I vowed, I was going to get it right (especially because people could see.)  Boat to boat, I pulled out my mostly-virgin rope bag, and applied my finest knots to affixing the bow of the drained boat to the stern of my Mathilde (don’t ask why Mathilde—there is no why.)  This was maybe not the speediest of operations, because a rope bag isn’t really meant to be a towline, but I made reasonable progress, only slightly hindered by frequent pauses to admire my own awesome competence.  I mean, here I was:  novice Catherine, retrieving a boat! using knots for which I’d had no call in many a year!  preparing to ferry said boat gracefully across the current (and into an eddy, and then around the rocks to attain up into the next eddy, because I was pretty damn sure I couldn’t actually attain any ground on the rapid itself.) Earning the undying gratitude of the souls across the way, who were surely wishing that they had my radical cool!

Except (because this narrative really demands an except, and the world had no qualms about providing one in a timely manner.)  Except that as I was tying my second set of knots, a playboat zipped into the eddy, paddled by a young woman whose radical cool (I am so sorry to report) was of a rather different level.

“Well, really, I’d just about got it, but if you know a better way…” (hoping fervently that she didn’t.)

She pulled an extensible strap out of her vest, with clips on either end.  She clipped the business end to the boat with which the would-be hero had been so laboriously fussing, while the erstwhile hero stood green with gear envy.  Erstwhile hero untied her knots, sighing bitterly.

“I must have one of those,” I remarked, in a last-ditch effort to convince myself that I was a real paddler who could find and use real gear.

“They’re great,” said my new hero, settling herself for the plunge, “but you have to know how to use them first.  If you don’t, they can be dangerous.”  With which heaping of coals of fire atop my smoking scalp, the only real paddler present shot out into the current, ferried beautifully up the rapid itself in about than thirty seconds—no pitiful eddy-to-eddy attainment for her—and delivered the boat to its owner in rather less time than it had taken to tie my first knot, and with considerably more style and dash.

This was a sad moment; my radical cool had become inexplicably soggy in the flood of experience, know-how, and actual competence.  I paddled dismally off to rejoin my party, which had been waiting some while for me to heroically earn the adulation of the novices, but who instead got to enjoy the big reveal of all my novitiate proto-competence.

But you know what?  That is okay.  My new hero had earned her radical cool through practice and experience. While that much radical cool is unlikely ever to be mine, if I’m willing to put in my own time and practice, the competence level will almost certainly rise.  And I’m never going playboating on the Chattooga, or paddling the Niagara, or shooting Tallulah Gorge with Trevor (and all available evidence suggests that these are indeed the case), I can learn to retrieve a boat, and get my roll effective (if not beautiful) every time, and come out of Nantahala Falls right way up.   And it’s a lot better to be late to this river than miss everything it has to give because I’m starting where the four-year-olds do.  In fact, I am heading out to Bear Lake this afternoon, as I write this, to work on the roll.  (Kind wishes would include the sudden development of accurate muscle memory, or, failing that, the absence of onlookers.)

If most people who come to writing in midlife aren’t going to be Chaucer—since pretty much no one is, no matter when we start—there’s still a place in the boat.  The middle ground between confusing our semi-competence with real knowledge on the one hand, and despairing on the other because we’ll never have enough real knowledge:  that’s a wide, wide median.  Most of us can occupy it.  There really is room on this river for everyone who wants to seriously try, everyone who’s here because we love the river.