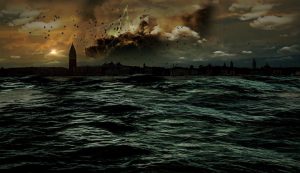 There he hath lain for ages and will lie
Battening upon huge sea-worms in his sleep,
Until the latter fire shall heat the deep;
Then once by man and angels to be seen,
In roaring he shall rise and on the surface die.
– Alfred Lord Tennyson, “The Kraken”

August, 1890. Scattered dispatches of bizarre happenings surface around the world.

A massive, half-ton stone appears one morning in the middle of a farmer’s cornfield outside of Greenfield, Indiana. The corn around the stone remains undisturbed, discounting the possibility that the hefty rock was dragged into the field as a prank. As if called to it, curious onlookers gravitate to the stone, while quiet speculation spreads about its possible extraterrestrial origins.

In St. Louis that same week, evangelist Maria B. Woodward whips her followers into a trance-like frenzy in which they “dance, cry, shout, sing, and swing their arms in the air.” A detractor derides the preacher as “simply an insane woman of great hypnotic power,” but Woodward herself claims to have heard the call of God and the devil and to have seen visions of future destruction wrought by great earthquakes and tidal waves. Nearly all the great cities, Woodward warns, will be reduced to ruins.

Meanwhile, reports spread of a new psychosis called “telephone madness.” In Paris, a young woman staggers into a busy street, clutching an invisible telephone to her ear and mouth, frantically trying to answer the call of heaven. “Is that you, St. Peter?” she screams, before hearing “distinctly through the telephone the celestial music of paradise.”

The next day, August 20th, H.P. Lovecraft is born in Providence, Rhode Island.

In “The Call of Cthulhu,” a stone idol of unknown origin prompts an investigation of a “dark cult” that worships “the Great Old Ones who lived ages before there were any men, and who came to the young world out of the sky.” The Old Ones now slumber under the sea, visiting mortals through tortured visions and blasphemous dreams. The ancient cult prepares for the awakening of Cthulhu, a brobdingnagian beast sporting dragon wings and a body “of vaguely anthropoid outline, but with an octopus-like head whose face [is] a mass of feelers,” who will rise from the sea and teach mankind “new ways to shout and kill and revel and enjoy themselves, and all the earth [will] flame with a holocaust of ecstasy and freedom.”

As Weird Tales hits magazine stands, the Daily News-Miner of Fairbanks, Alaska, prints an account of a band of hunters’ encounter with a “prehistoric monster” in the Arctic Circle: “As big as ten elephants, it passed like a hurricane across the frozen river, smashing immense blocks of thick ice into the air. Its long bristles were covered with hoar and frost, and its immense red eyes flamed in the twilight.” The hunters were unsuccessful in their attempts to photograph the hideous thing.

Three years before Lovecraft publishes “The Call of Cthulhu,” an English explorer named P.H. Fawcett comes into possession of an enigmatic stone figure of a priest in unusual ceremonial dress. Moved by the “peculiar property” of the obscure statuette, Fawcett consults a medium who, upon touching the figure, is overwhelmed with visions of an impossibly archaic and “irregularly shaped continent” spotted with “elaborate temples . . . hewn from the faces of cliffs, their projecting facades supported by beautifully carved columns,” in and out of which pass processions of priests. The seer is then wracked with images of an apocalypse with “volcanoes in violent eruption” and the sea rising “as in a hurricane.”

Spurred by these fantastical images, Fawcett plunges into the Brazilian rainforest in search of a lost ancient city, but within weeks, all communications from his camp cease. Several years later, in the same month that Lovecraft’s “Cthulhu” is published, a search party attempts to retrace Fawcett’s footsteps, but they emerge from the jungle months later, empty-handed.

In February of 1984, heavy metal band Metallica records the epic instrumental tribute to Lovecraft, “The Call of Ktulu,” for their album Ride the Lightning, the title of which they take from a line out of Stephen King’s apocalyptic novel, The Stand.

In 2014, King releases his fifty-fith novel, Revival, for which he “wanted to use Lovecraft’s Cthulhu mythos, but in a new fashion.” Two years later, amid a contentious presidential election, King tweets his theory that Donald Trump is actually Cthulhu in disguise. Offended, Cthulhu’s Twitter account tweets back a fierce denial and spontaneously announces the Great Old One’s own bid for presidency. Cthulhu’s campaign slogan: “Why vote for the lesser evil?”

Sixty years after Lovecraft first penned “The Call of Cthulhu,” an episode of the cartoon The Real Ghostbusters pits the extra-dimensional demon monster against the quartet of paranormal exterminators in a showdown at Coney Island. Peter Venkman levels his proton pack at Cthulhu’s hulking form rising from the sea and says, “Ok, Squidface, I’m going to make calamari out of you.” The Ghostbusters harness the power of lightning by crossing their particle streams, and with a terrible wail, Cthulhu evaporates into a crimson mist.

But is Cthulhu dead, once and for all, or has he only sunk down once again into “that chasm of stone which has shielded him since the sun was young”? The cryptic incantations of those initiated into the cult of the Great Old Ones might offer an answer:

That is not dead which can eternal lie
And with strange aeons even death may die.