Home
»
Series
»
Throwback Thursday: “The Lottery” and Let Me Tell You by Shirley Jackson 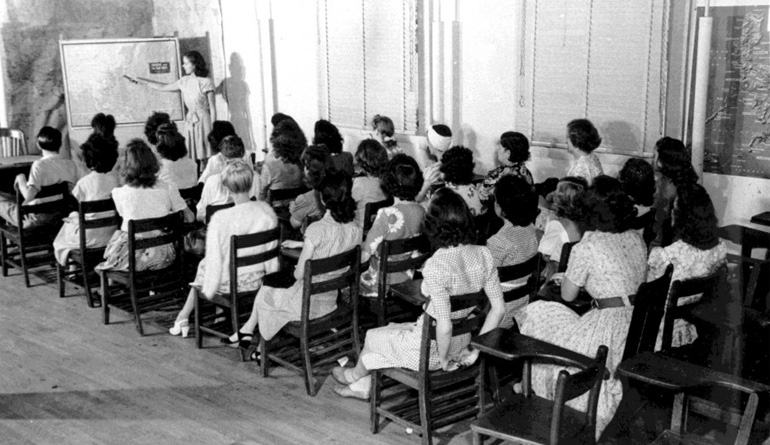 Throwback Thursday is a series that highlights classic texts commonly assigned to students that deserve to be revisited and reconsidered in adulthood. This month’s selection is “The Lottery” and Let Me Tell You by Shirley Jackson.

Centered on a tiny American village with a strange annual tradition of choosing a human sacrifice via lottery in order to ensure a good harvest for the following year, Shirley Jackson’s 1948 story “The Lottery” carries the title of “perhaps the most controversial short story The New Yorker has ever published.” But controversy doesn’t necessarily beget negativity; Jackson would go on to publish 12 more stories in the magazine, and “The Lottery” would become required reading in schools across the country. It would also be credited by many reviewers as one of the clear ancestors to 21st century smash-hits, such as The Hunger Games.

For this month’s Throwback Thursday, we’re going a bit off script and recommending that you not only re-read Shirley Jackson’s essential text, but also something that was only made available to the public in 2015. Let Me Tell You is a collection of 30 short stories–22 of which never made it into the public sphere–and 26 snippets and essays which encompass the body of Shirley Jackson’s work. Jonathan Lethem, in a review of an earlier collection of Jackson’s work, said she “wrote about the mundane evils hidden in everyday life and about the warring and subsuming of selves in a family, a community and sometimes even in a single mind. She wrote about prejudice, neurosis and identity.” And though we may not have had the ability to read (let alone be assigned) these stories while we were students, they, alongside “The Lottery,” give us access to a haunted mind that in many ways predicted the fears and social ails of the America we live in now.

Take, for example, the first story in the collection, “Paranoia,” which examines the fears that inexplicably manifest in the most banal situations in everyday life.  The protagonist of the story is New York City resident Halloran Beresford, and after having what he describes as an “exceptionally good day” at work, he stops by a shop to by pick up a box of chocolates for his wife for her birthday and attempts to board his normal bus home. But he’s pushed aside by a man in a light hat, causing him to miss the bus. While this in and of itself is perhaps not exceptionally notable, what is notable is the ensuing commute, during which the man in the light hat follows Beresford through shops, in taxis, on buses and in the subway. While it’s never revealed whether or not the man in the light hat is truly stalking our protagonist, no person who has lived in New York City since the towers fell can deny having that feeling of someone constantly being there, the ever-present specter that could of course be someone following you, but could also be the demons you’ve thought you’ve left behind–or the demons that belong to the city itself, manifesting themselves among the ever-present bustle of the city streets.

Or “Family Treasures,” which focuses not on the tormented but on the tormentor, tackling the feeling of being invisible and irrelevant, and the ways in which we cope with that discomfort. Anne Waite, a shy young college student, loses her mother and in rapid succession also loses her group of friends. She believes this to be triggered not by her own reserved manner, but by the fact that nobody wants to be friends with someone who is “Trying to Be Brave” in the face of tragedy. As a result, Anne begins looting her dormitory, stealing the items that her fellow students hold dearest. Nobody suspects Ann, because they don’t consider her to be on a level with them, and as the victims search for the thief among themselves, Ann herself reports the events to a person in charge. While she neglects to give up the name of the culprit, she does go throughout the dorm, hiding the items in the other girls’ rooms and revealing their secret items to everyone present. It’s not malice that drives her, though; it’s a desire for stability and to be ‘one of the gang’–and when the story closes out, it’s clear that she’ll carry on this attention-seeking endeavor until she gets caught.

And then there’s “The Arabian Nights,” in which we are reminded of how fleeting our childhoods truly are, and how once the pressures of being an adult sink in, all you want to do is return to being a child. For Alice Carrington’s twelfth birthday, she’s treated to a ‘grown-up celebration’ at Arabian Nights, an incredibly popular nightclub. Her parents treat her like the adult she wants to be, offering her cigarettes and drinks, and they’re all treated to a surprise appearance by a man who looks remarkably like Clark Gable. Alice’s parents try to encourage her to go over and ask him for his autograph, or to come over and join the family for a drink–but it’s then that she’s paralyzed with fear, and realizes that she just wants her parents to take care of it. Sure, it’s not the highest of high-stress situations but Alice is reminded of the fact that she still wants someone else to take care of her, politely telling her parents that she’s got homework to do and wants to go back to being a kid as soon as possible–and luckily for Alice, as she’s only 12, it’s something she can do.

These are only three stories from the nearly 60 that Let Me Tell You is composed of, and each one tackles an issue that plucks our heartstrings and reminds us of the things we fear the most in our lives and the times we wish we could claw back to. In the same way that “The Lottery” depicts a world in which the rules of civility have been thrown out–sacrificing our peers for the sake of financial gain–these stories tackle the things we don’t talk about in a way that feels timeless and personal, creating an empty coloring book which a reader shades with their own experiences and desires.

Ultimately, something old can carry the same amount of emotion as something new. And with this book, you get the best of both worlds: you experience the old as brand new. Ruth Franklin, the author of a new book on Jackson, Shirley Jackson: A Rather Haunted Life, says in the introduction “For the writer, ‘all things are potential paragraphs’ but their emotional valence remains to be determined.” And that’s what makes the entire body of Shirley Jackson’s work so worth a second look: no stone is left unturned in her prose, and every single line in every story contains an onslaught of visceral emotion that makes us remember how human we truly are.

Tags:Let Me Tell You, Shirley Jackson, The Lottery, Throwback Thursday