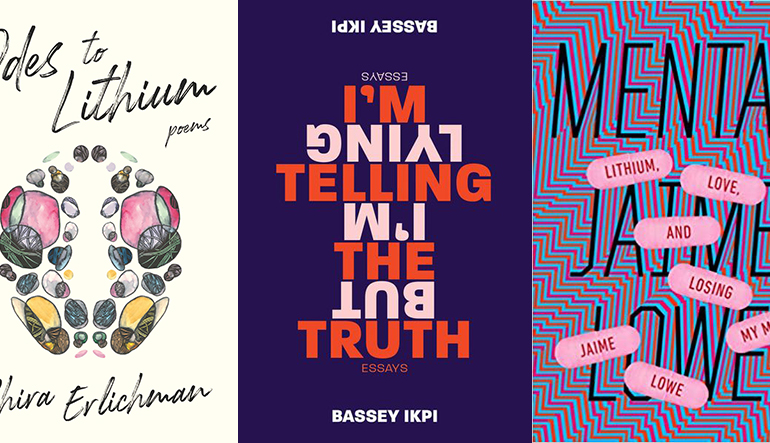 Each night, I take six pills like a shot I chase with water: one small red pill for birth control; two 150mg white discs of Lamictal; two 450mg yellow hued pills of lithium; and one bluish pill with ashwagandha, a plant that’s supposed to make the lithium more effective. I’ve been taking these pills daily for at least six months, yet every night I still stare at my capful of pills and take a deep breath, steeling myself for the moment I will slug them down, a bitter, sweet, papery taste lingering in my mouth afterwards. Taking the lithium and Lamictal feels more like a chore than the lifesaving measure it’s been billed to me as. I want so badly to let these pills expire in my medicine cabinet like I do with my vitamins, for my nightly ritual to be reduced to washing my face and brushing my teeth. I feel fine, and I question whether it’s the pills that make me feel this way, a common thought for people with a diagnosis like bipolar (I and II) disorder.

In her recently published essay collection I’m Telling the Truth but I’m Lying, Bassey Ikpi writes about her diagnosis of the mental illness we share: bipolar II disorder, a form of bipolar that consists of hypomania, a less severe form of mania, and depressive episodes. Those with bipolar II can go years, months, weeks, days, or hours between hypomania and depression; they can even experience the two simultaneously. Ikpi asks her doctor, “‘How long before I’m cured?’” “There is no cure,” he tells her, “pity visiting then leaving his face.” In the wake of this news, Ikpi feels “panic hit [her] chest first, then drop…into [her] belly” as she thinks, “There has to be a cure. It’s not AIDS or cancer, it’s my stupid brain.” Later, she imagines that bipolar medication could work like antibiotics and that a life sentence of taking pills “was for the people who wouldn’t try as hard as [she] would to be well.” Although bipolar II is considered a treatable illness—there are loads of medications to try—those diagnosed with it are often daunted by the prospect of ingesting medications every day for the rest of their lives, medications formulated in Big Pharma labs with names we can’t spell, medications that make us sluggish, make us vomit, gain weight, feel dizzy, and give us a whole host of other side effects. Many of us choose to—or have to, due to side effects—go off our drugs.

Ikpi, like me, has questioned the efficacy and purpose of the pills she’s taken. “What was my purpose?” she asks. “To be normal.” She goes on, “I wanted to be someone whose brain knew how to work. I didn’t want the extra help, especially ‘help’ that brought its own set of problems. The pills were keeping me from my life.” She fantasizes about “throwing [her] arm back like a quarterback and tossing the bottle as far as [she] could.” To assure their demise, she flushes her pills down the toilet, planning on relying on natural ways to cure depression instead: no drinking or sugar—anything to not have to take those pills. Like many people who have bipolar disorder, going off her pills lands her in the emergency room.

Although they may still question their pills, some people with bipolar disorder herald the pills they take as a miracle, something they love and can’t live without. For bipolar disorder, the most tried and true treatment—the most effective one—doesn’t come from a lab; it comes from stardust. It’s an element on the periodic table, atomic number 3, as Jaime Lowe writes in Mental: Lithium, Love, and Losing My Mind. It can’t be patented, and as a result, there isn’t much motivation for pharmaceutical companies to research it, although psychiatrists regularly prescribe it because it’s so effective. “I capitalize your name, though the world says / that’s unnecessary—you’re an element after all, / no proper noun,” Shira Erlichman writes in her forthcoming collection of poems Odes to Lithium. Both Lowe and Erlichman, diagnosed with bipolar disorder, examine the element that has kept them alive, kept them sane, helped them be “normal.”

To write about a diagnosis like bipolar disorder and dependency on a drug isn’t easy, though. “It was not a classification I appreciated at first. No manic person—in the throes of omnipotence, ecstasy, and strategic warfare—wants to hear that they are…just sick,” Lowe writes. In an interview with Foglifter Press, Erlichman says of writing Odes to Lithium, “It began with shame. Years ago, I couldn’t say the word Lithium aloud. Let alone write about it.  I challenged myself to sit down to write an ode to my less-than-beloved medication. But even amidst an attempt at gratitude and admiration, I titled it ‘Pill.’ To name is to reveal. To reveal is a vulnerable act. In the moment, it felt vulnerable to write this poem, it was a step.” The shame surrounds the diagnosis and medication itself. “[E]veryone seems to be lowering their voices these days,” she notes in “Pink Noise, “even the pharmacist at the pick up counter whispered ‘the lithium?’” I haven’t noticed this whispering myself, but I engage in it, look over my shoulder to see if there is anyone behind me in line, anyone who could hear that I take lithium, who could hear that I’m crazy. I remove the label from the bottle so no one knows what pills I put in my body each night.

While Erlichman’s testament of lithium is comprised of odes, Lowe’s Mental is a love song and an elegy all at once. Lowe questions, “Who am I in relationship to the medication, to the disease, to my experience? How did lithium shape me?” For Lowe, lithium makes her feel what Ikpi’s medications initially did not. “It gave me twenty-four years of sanity—to live, to grow, to love, to flourish, and to fail,” Lowe writes. “It gave me the chance to fuck up my life and repair it, to function as if I were just another ‘normal’ person.” Still, like Ikpi, Lowe questions the efficacy of her pills. “I knew for at least a year, maybe two, maybe for a life that I’d always wonder if happy was manic or manic was happy and if lithium was the only thing that prevented my happy from becoming mania,” Lowe says.

“You, my infinitesimal gargoyle, / chaperone of my darkness,” Erlichman writes of lithium. I cleave to this description and how precise it feels—“gargoyle” invokes the grotesque, forever grotesque. Lithium, for me and for Erlichman, holds us from succumbing to darkness while tugging us back from mania at the same time. “Chaperone” conjures for me the 19th century, young couples courting each other under the supervision of a chaperone, parents who volunteer to chaperone school field trips, a figure of authority monitoring those who might not be able to control themselves otherwise, those who might not be able to control themselves because they have bipolar disorder. The darkness recurs. Like Ikpi, Erlichman wishes to be off her pills. She tells her psychiatrist, “I’m being honest with you…I feel fine.” But she realizes later that she’s wrong. “My baby,” she thinks to Lithium,

I should have
listened. I would have heard your loyalty to my darkest waters.
In the ascending months, & grey matter of sleeplessness,
I came to know what your absence always means. Cliff.
Every day knived sharper & doused in electricity.

Both Erlichman and Lowe write about Phineas Gage, a man famous for surviving a rod being shot through his head in 1848 while blasting rock. It changed his personality, but he lived for another 11 years. Lowe notes that Gage’s survival revealed that “[t]he brain and its propensity to define and control personality and emotion was still a relative mystery. This seemed relevant to [her] because at the most basic level Gage represents two people, one brain.” She continues, “Even if I didn’t have an actual rod through my brain, I felt like something had altered my personality.” Erlichman echoes a similar sentiment in her poem “Thirteen Ways of Looking at Phineas Gage.” For her, Gage becomes a friend crashing at her house, the rod splintering his head still visible, and this visible bipolarization becomes a stand-in for Erlichman’s invisible bipolarization. “We’re old friends,” she writes. “Kissed once to test the waters, but found we liked talking and fighting better.” He tries to take the rod out, “glar[ing] at the mirror,” “a sternness in his jaw.” Of course, he fails. It’s in there for good. Later, Erlichman’s mother drops by and sees Phineas. “She stumbles backwards, can’t tear her eyes from the silver saber impossibilizing itself through his head.” Then one night, Erlichman says, “‘Fuck it,’ [and] pack[s] him into the front seat, unroll[s] the moonroof for his head.” They go into a pizza place where a “teenager raises his eyes from the cash register, his throat caught on hello.” Erlichman animates Lowe’s statement that Gage represents bipolar, “two people, one brain.” As in Gage’s case, Lowe asks, “Did my mood disorder—a disease of the brain—change me? How did I see myself? How did others—my family and friends included—see me?” In Erlichman’s hands, Phineas’ visible bipolarization is able to reveal the frustration and acceptance with bipolarization that one feels, as well as the curiosity and horror, insensitivity and repulsion viewers fail to hide.

Erlichman captures the lifesaving, reliable, endearing lithium, a salt, when she writes, “you shovel salt through my blood / like a dedicated father clearing the driveway.” This salt coursing through her blood affects her tolerance for alcohol. Her friends “tease ‘just one drink & you’re good.’” In response, she thinks, “it’s not the wine / somebody cares for me.” Similarly, Lowe announces, “I don’t believe in God, but I believe in lithium.” Still, “[l]ithium wasn’t easy at first…there were imperceptible shifts and doubts about who I was and how the drug affected me. I have never really resolved those doubts, except to carry on with the assumption that I am a better me with medication than without.” Mental, though, is an elegy to lithium because Lowe is forced to go off it to save her failing kidneys, a rare but not uncommon side effect. “It’s true,” Erlichman’s Lithium says, “Give me enough time / & I’ll anvil your kidneys.” She wonders, “What do my organs think of your soft arrival each day,” and “Who do you speak to in my body that listens?”

Bipolar disorder is difficult for me to language, and when I write or talk about it in public settings, I’m often told how brave I am, to keep it up, that someone else out there suffering needs to hear what I have to say. I understand the feeling Ikpi writes about of having her mind shut down when a list of personality traits become symptoms of her sickness. This has happened to me, too, but I feel instead that it’s my brain shutting down. Lowe points out that in the mid-1800s “lithium was thought to cure gout and sometimes ‘brain gout,’ a lovely description for mania, extending the notion of swollen joints to a swollen brain.” Each night I pause before letting those pills scrape down my throat because I wonder if the pills are working, wonder what they’re doing to my brain. I wonder what will happen if I stop—can I stop? If I stop taking the pills, will the suicidal ideations, hypomania, and depression that coalesced in a trip to the ER last August come back? From everything I’ve read, I know better than to stop, but it lingers, that doubt, that maybe I can stop taking these pills and stay alive, too.