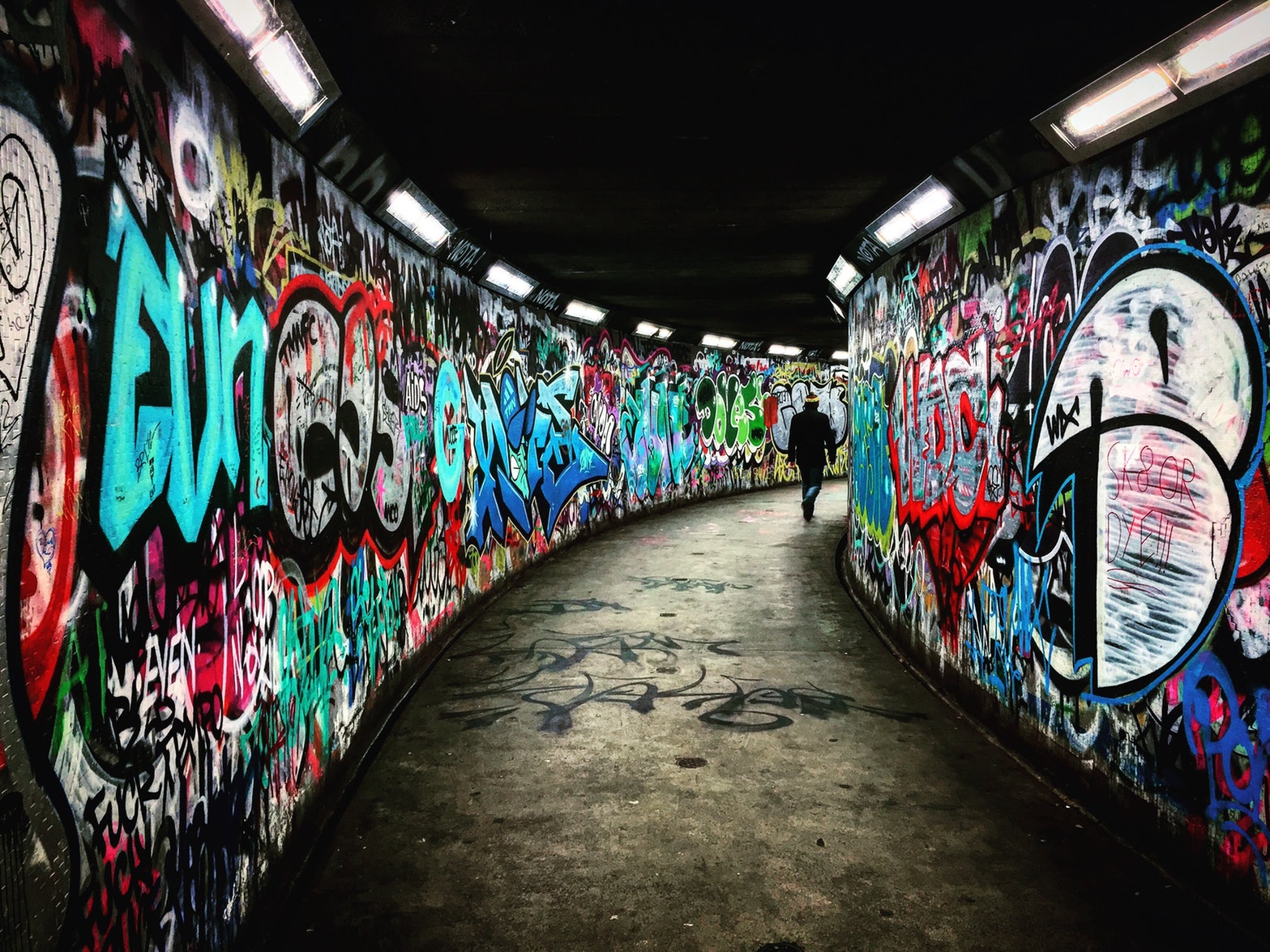 The subway has always been the great equalizer of New York City: it’s how the 99% of us get around. The best people-watching happens here, and the city’s art and culture scene extends deep underground. At all hours singers and musicians busk, artists sketch, and dancers that the Mass Transit Authority would like to see disappear flip through acrobatic routines. For a shot of literature, straphangers can read poetry through the MTA-sponsored Poetry-in-Motion program.

In the 70s and 80s, before the Clean Train Movement and Ed Koch’s relentless war against street art—that gross indicator of public disorder—NYC subway cars were covered in the aerosoled tags, poetry, and words of resistance to oppression of local graffiti artists. I’m seized with a particular ache by film scenes with these embellished subway cars from an era I never knew, before it was all covered over with government-issued paint, concrete, and jail-time.

But even with art, riding the subway during morning rush hour is no pleasurable thing. Discomfort and annoyance aside, the vulnerability of an overcrowded car of citizens weighs on my mind more than ever these days. In this political climate, trains, like all public spaces in NYC and other urban areas, have become tinged with a sense of danger. “Bombing” the subway is no longer a metaphor—no nocturnal stealth or spray paint evoked here.

My fear manifests in small bouts of dread and the perhaps irrational routine of riding only in the first or last car. I feel alone in and ashamed of my suspicion, eyeing shifty fellow riders with large packages or unseasonably bulky coats. Who is the angry misanthrope, the radicalized jihadist youth, the murderous and spurned women-hating white man among us this morning? These panicked thoughts are deeply ignoble moments for me so I felt some relief when reading Teju Cole’s essay, “A Reader’s War”:

Of late, riding the subway in Brooklyn, I have been having a waking dream, or rather a daytime nightmare, in which the subway car ahead of mine explodes. My fellow riders and I look at one another, then look again at the burning car ahead, certain of our deaths. The fire comes closer, and what I feel is bitterness and sorrow that it’s all ending so soon: no more books, no more love, no more jokes, no more Schubert, no more Black Star. All this spins through my mind on tranquil mornings as the D train trundles between Thirty-Sixth Street and Atlantic Avenue and bored commuters check their phones. They just want to get to work. I sit rigid in my seat thinking, I don’t want to die, not here, not yet.

What worsens the fear is the guilt in knowing we’re safer than many other people in the world:

I imagine those in northwest Pakistan or just outside Sana’a who go about their day thinking the same. The difference for some of them is that the plane is already hovering in the air, ready to strike.

My fear is not so paralyzing that it compels me to leave this city I love. The astonishing moments I see and experience, especially on the subway, eclipse the anxiety. They would touch you too if you stayed long enough.

Several months ago my husband described to me something he’d seen on his ride home. I think about his scene often; it has become so poignant for me that sometimes I almost forget that I wasn’t actually there.

It goes like this: a homeless black man in the corner of the 6 local car at turns babbles to himself, sits, stands, moves his feet up and down from the bench, and yells obscenities at the other passengers, including people who aren’t there. Many move away, all ignore him. At some point, the woman across from him looking like she has just returned from the Hamptons—summer linen, blonde hair piled high on her head—puts down her book, studies the agitated man for a moment, then moves to sit next to him. She says something my husband can’t hear, puts her arm around the man, and guides his head to lie on her chest. The man falls silent and rests against her while she strokes his head and speaks quietly to him. He raises his head intermittently to look at her. They look at each other. He returns to the spot on her chest.

You might say he was just another mentally ill homeless person. You might say she was another privileged person stepping into the role of white savior. But I think about how, for twenty minutes on a slow train from Nevins to Grand Central, what I once heard Claudia Rankine call, “the racial imaginary that pollutes the space between two people,” was broken down.

Charles D’Ambrosio advises writers to resist turning people and characters into symbols and metaphors. Treat them as the humans they are, he said. Don’t reduce people or ideas just to make them universal. It’s a pretty basic rule of writing but one I remind myself over and over, and not just in regards to craft.

This election year has been, at many turns, ugly. The rhetoric of a certain abominably unqualified candidate pushes us to fear what we do not know. Build walls to separate those perceived as dangerous or even just different, he tells us. People like this seize upon tragedy. They incite and encourage fear, push us to typecast one another. In my weakest moments on the subway, I have not been entirely immune to this.

But scenes like my husband witnessed and more—the pleasure of three graying men as they harmonize on the Temptations, riders scream-laughing and jumping on the seats as a rat darts through the closing doors and into the car at Nassau, grumpy morning commuters cracking smiles at the conductor rattling off stops like an auctioneer, a young man crying openly—feed me not only as a writer but as an inhabitant of this diverse, global city. Like anywhere else, there are occasions of tenderness, humanity, and connection everyday.

Moyra Davey, an artist I like for her attunement to the overlooked, poetic details of everyday life and objects, made a photographic series titled “Subway Writers,” 75 images that capture commuters in the act of writing on the NYC subway from 2011-2014. What they are writing—letters, to-do and grocery lists, poems, financial reports, novels—we can’t know. Each photo shows a person in their own world in an act of creation.

New York is still rich in art-making—always has been, always will be. I suppose my wistfulness for an early NYC—mylar balloons, roller skates, Studio 54, punk, hip-hop block parties—is rooted in the impression that artists did things more loudly, more defiantly back then. Graffiti was visual anarchy; it challenged property ownership, race boundaries, and culture. But today as much as then, words and art can alter the consciousness of human beings and society. They are the consolation, the weapon against our fear of each other and of ourselves.