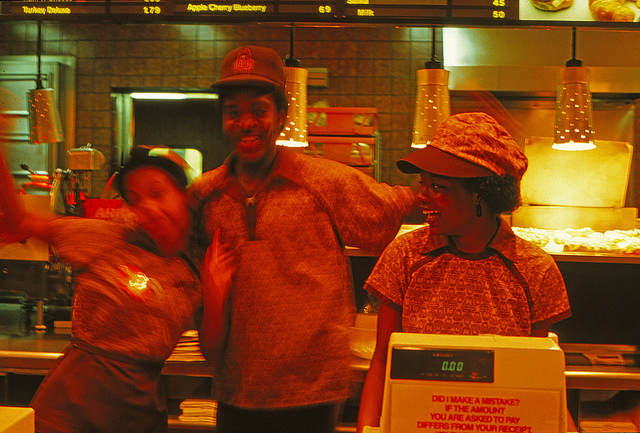 In a recent interview with Men’s Fitness, Chris Pratt claimed Hollywood has a representation problem. “I don’t see personal stories that necessarily resonate with me, because they’re not my stories,” he said. “The voice of the average, blue-collar American isn’t necessarily represented in Hollywood.” True to form, Twitter disagreed with the actor, pointing out that there’s no shortage of straight, white working-class characters on screen. In fact, Pratt, who’s probably best known for his transformation from the schlubby, yet irresistibly funny Andy Dwyer into a fit, somewhat funny action hero, has even played some of them.

As the Jurassic Park star got dragged across the internet, I thought about poet friends who have told me they don’t see their own “average, blue-collar” stories reflected in what gets published. For many reasons, this is hard for me to believe (or entertain), especially with the canonization of writers like Gwendolyn Brooks, Eileen Myles, Gloria Anzaldúa, and Jack Gilbert, who famously said, “You can’t work in a steel mill and think small.”

Yes, “labor” itself has changed, which means blue-collar jobs look much different now than they did when a fourteen-year-old Philip Levine worked in a Detroit automotive plant. And yes, poetry, like the film industry, has significant issues with underrepresentation and who gets to tell their story. But there are a number of poets writing about class right now—and how it intersects with race and gender and sexual orientation—in ways that depict the multiplicity of these experiences.

In Natalie Diaz’s poem “The Facts of Art,” which appears in her 2012 book When My Brother Was an Aztec, class is not a subject as much as it is a cause for the poem. In the first few stanzas, Hopi men and women watch white construction workers drill through a mesa to expand the Arizona highway. The young Hopi men need work, so they “signed on with the Department of Transportation, // were hired to stab drills deep into the earth’s thick red flesh.” As the crew cuts through the desert landscape, they uncover “the small gray bowls of babies’ skulls” and other Hopi remains. The Hopi workers, the speaker explains, refuse to go back to work afterward, despite the white foremen knocking at their doors, sending their wives “to buy baskets from Hopi wives and grandmothers / as a sign of treaty,” and calling them “good-for-nothings.”

The small bones half-buried in the crevices of mesa—
in the once-holy darkness of silent earth and always-night—
smiled or sighed beneath the moonlight, while white women
in Airstream trailers wrote letters home

praising their husbands’ patience, describing the lazy savages:
such squalor in their stone and plaster homes—cobs of corn stacked
floor to ceiling against crumbling walls—their devilish ceremonies
and the barbaric way they buried their babies,
oh, and those beautiful, beautiful baskets.

While there are a number of systemic forces at play in this narrative, all of them feed into what reads like an almost mundane manifestation of oppression. Diaz’s language leans toward lyricism, but it isn’t necessarily meant to be poignant. Because of needing work, because the highway’s expansion through their home appears inevitable, the Hopi men take part in an everyday demolition of their own existence. These are, Diaz seems to be saying, the facts of art.

Then I thought about Trudy, a writer and the founder of Gradient Lair, calling the phrase “working class” a dog whistle, meaning it is coded. Though we might generally refer to construction workers or fast food employees as “working class,” a narrower definition is often implied. “People don’t consider Black folks ‘blue collar,’” she explained. “So when Chris Pratt says Hollywood doesn’t show blue collar, I feel at the root he’s saying ‘more rich Whites than working/poor Whites.’” Poet and BuzzFeed editor Saeed Jones seemed to echo Trudy’s interpretation and responded to Pratt by listing recent films. “Fences, Manchester By The Sea, and Moonlight all featured blue collar characters, btw.” In other words, Pratt’s criticism of Hollywood doesn’t indicate an absence of “personal stories” that resonate with him, but his inability to engage beyond relatability.

Some readers have the same problem; a text is “good” if it’s “relatable,” which really means, as Rebecca Onion wrote for Slate back in 2014, “relevant to me.” “The word bothers me most,” Onion wrote, “because it presumes that the speaker’s experiences and tastes are common and normative.” In my experience, when someone says a text or a film or a piece of art isn’t relatable, they’re also saying it is not worth examining.

After a hot minute of reflection, Chris Pratt owned up to his mistake and tweeted, “There’s a ton of movies about blue collar America.” For once, Twitter seemed to return some order to the world. It can be dangerous, of course, to say we have heard enough of any one voice or story. By no means has contemporary literature reached its limit of working-class writers, but we should also recognize what has been written and how we’re engaging with it. In the meantime, my response to poet friends bemoaning the need for work that reflects them will be, in the words of Dana Scully, “Not everything is about you.”

Tags:blue collar, Chris Pratt, Natalie Diaz, poetry, The Facts of Art, When My Brother Was an Aztec, working class