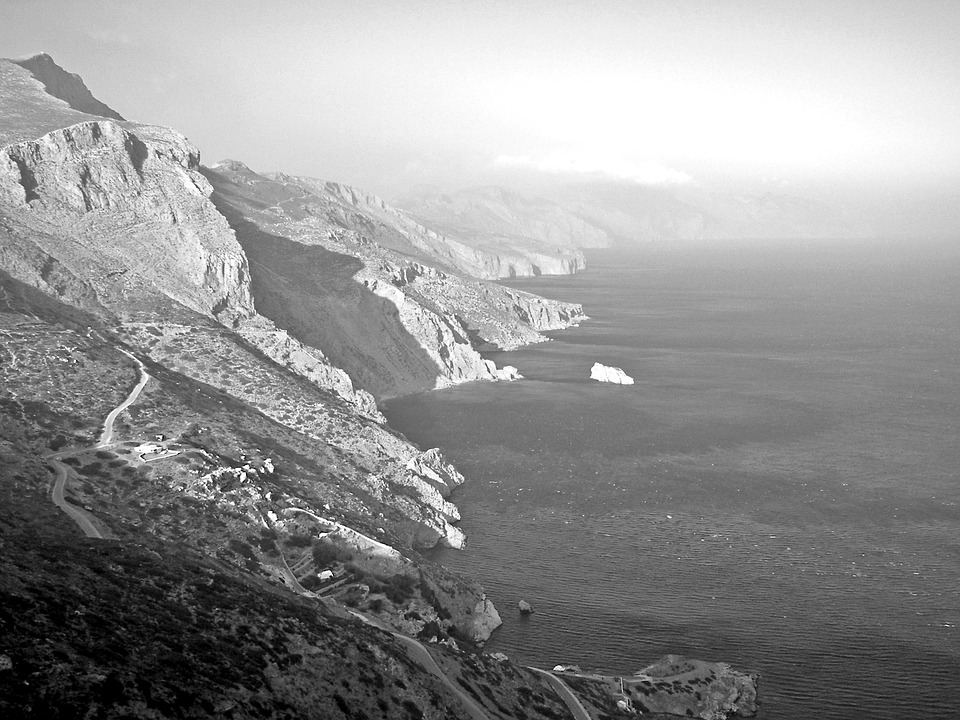 Christos Ikonomou has been called a prophet of the Greek debt crisis—his short story collection Something Will Happen, You’ll See, translated from the Greek by Karen Emmerich in 2016, was published in March of 2010, weeks before Greek bonds were downgraded by credit rating agencies. His characters are dealing with the crisis in one way or another, regardless of whether they have named it. But the writer says he wasn’t a prophet—when he started writing his first collection, in 2003 and 2004, he was trying to go beneath the surface of things in his work. It was only owing to his slow pace that Something Will Happen debuted at the beginning of the crisis. At any rate, the timing was uncanny and resulted in Ikonomou’s work being considered part of the “crisis lit” canon that has arisen.

This March, a translation (also by Emmerich) of Ikonomou’s new collection of four loosely interwoven stories was published. The characters of Good Will Come From the Sea, who have moved from Athens to an unnamed Aegean island, are, like those in Something Will Happen, dealing with the debt crisis. The book’s stories revel in ambiguity, illustrating the crisis in a more nuanced way than many of the “crisis lit” works that reach the U.S. Importantly, too, they demonstrate Ikonomou’s gift for Greek in its rawest spoken form.

In the book’s first story, “I’ll Swallow Your Dreams,” the narrator says he wishes he could burn everything, from his kids’ clothes to his wife’s shoes, all of the shoes she’d amassed over the years, gone crazy over, when things were good:

Sometimes I think, we lost our jobs, our homes, our lives—why can’t we lose our memory, too? Why? Why did they take everything else but leave us our memory?

While the English, here, doesn’t quite have the same cadence and sound as the Greek does, you can hear the natural speech in it—the frankness and hyperbole that can come as a surprise when first encountering Greeks and Greek language. This is the genius of Ikonomou’s writing and the appeal of his stories overall—that his work is at once stripped of pretense and, at the same time, miraculously rambling, like a good oral story. You often feel, when reading his work, that a friend is telling you a story over a drink or a cup of coffee—a story of the most devastating kind.

Take, for instance, the book’s third piece, “The Good Will Come from the Sea,” in which a father, Lazaros, roams the island in search of his lost son, Petros. Lazaros, a taverna owner, urges Petros to take a job working as the driver for one of the richest men on the island, a goon referred to as Mr. Haris Drakakis. The story opens with Lazaros wandering, wearing his hunter’s gear: GORE-TEX, Air-Active, Multigriff, Deerhunter, Beretta, KA-BAR—words that stand out in Greek as much as they do in English.

With a flick, we are transported to a scene in which Petros, working as a waiter in his father’s restaurant, serves Drakakis, who has come into the taverna with a slew of prostitutes. Lazaros describe them as “a pack of whores in miniskirts up to their navels”; they order a fifteen-pound spotted grouper as well as endless scallops, sea figs, crayfish, and bottles of champagne and wine. Lazaros thinks about what it would be like to have so much money that you don’t have to worry, that you can go to Mykonos for an afternoon swim, Santorini for dinner. Months later, Drakakis offers Petros the driver job, and Lazaros implores him to accept. Petros doesn’t want to take the job, but he does because of his father’s urgings. We soon learn of the abuses he endured before his disappearance, which prompts his father’s never-ending search and repeated explorations of a cave where local young people have been known to have died by suicide.

As he searches, we learn why Lazaros pushed his son into the job. Alone in the dark of the cave, Lazaros strips off his clothes. He lies there, apologizing to Petros. He didn’t want him “grazing on nickels and dimes” like other people, he says. He wanted Petros to learn from those who have money: “if you’re going to hunt for money you have to go out with the guys who know how to hunt.” He didn’t want Petros to end up owning a taverna like him, even though it brought Lazaros more than enough money to live and give Petros a good education.

What the story suggests is that Lazaros, and perhaps many Greeks, if we take this work as a depiction of the whole of society, have aspirationally sold off what was most precious, ignoring the more unsavory aspects about the bargain. This critique could be applied to many parts of the world—people often envy the lives of the rich without taking a close look at the values that resulted in such wealth nor of the lives of the sycophants clinging to them both in the fear of being thrown off and in the rapt state of worship. Greed, Ikonomou seems to suggest, is universal. Ikonomou’s focus on Greece illuminates this greed and its weight: it has, unjustly, broken many lives.

Tags:Christos Ikonomou, Good Will Come From the Sea, Greece, Karen Emmerich, Something Will Happen You'll See