Home
»
Uncategorized
»
Cleveland and the Art of Living 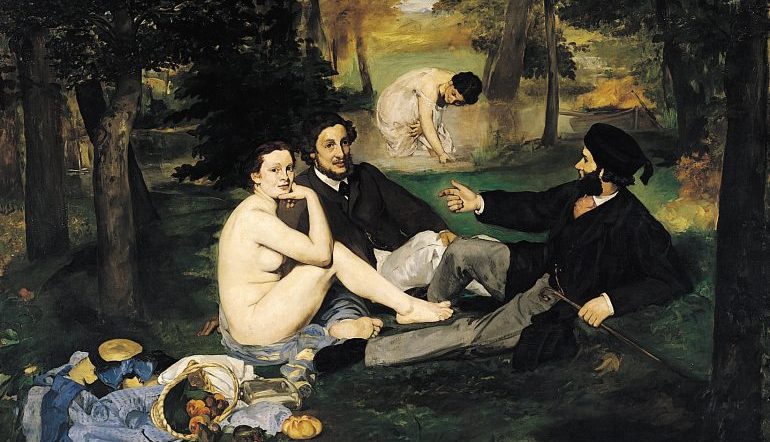 “The Full Cleveland and the Salon of the Refused”: Part II
Guest post by Alicia Jo Rabins

Julie Patton, an artist, writer, visionary and teacher with roots in Cleveland, asked this question (about Cleveland the place, not Cleveland the suit from last week) in a talk she gave to thirty young New York artists recently. Julie spoke about the art space she created in Cleveland called the Salon des Refusés. It occupies a house she bought for dirt-cheap, decades ago, along with the empty lot next door that she made into a garden. Julie doesn’t particularly believe in ownership, so she had no interest in renting out the house, and instead created a gallery and unusual artists’ residency. At the Salon des Refusés, she says, “We practice the art of living.”
The original Salon des Refusés, for which Cleveland’s is named, was an 1863 exhibition in Paris. The show was literally a salon of the refused, an exhibition of rejects, made up of paintings rejected from the official Paris Salon. Although guerilla salons had been mounted for years, this was actually an official exhibition sponsored by Napoleon to deal with the outcry from rejected artists, since it was pretty much impossible to have a career without being selected for Salon exhibition.
The original Salon des Refusés included some now-famous paintings, like Edouard Manet’s controversial “Le déjeuner sur l’herbe.”
Why controversial? Well, the obvious: a nude woman sitting with clothed men. But also the dissolution of place, a traditional painterly landscape that fades into abstraction in the background, and separates into visible brushstrokes in the foreground. In addition, some think the setting itself is a scandalously liminal place: the Bois de Boulogne, a large park on the outskirts of Paris, famous for its prostitution. And, apparently, still famous as a place for prostitution and illicit sex after dark in present-day Paris. A little dissolution, some brushstrokes, at the edges of a great city.

Julie Patton’s Salon des Refusés takes the exhibition of the rejected a step further, investigating the relationship of art, refuse, and place itself. The materials artists work with are the detritus of commerce and experience in Cleveland. Patton writes that the area around 1387 East Boulevard, where the Salon is housed, is fifty percent occupied, fifty percent vacant.

The art that happens here, Julie Patton writes, is one of re-purposing, re-collecting. The discipline derives from living, and being lived-in. All materials are native, inexpensive or free, belonging to this place already — an artist simply borrows them for their stay. Place is built-upon, built-up and rebuilt. Nothing is knocked down or demolished but that notion of placeless-ness that effaces our bashful city.
Detail from “Congregation,” by Salon des Refusés resident artist Nina Sarnelle.
IV.
In the heart of Manhattan’s glistening financial district – yes, still glistening, so far – a few artists work among the stockbrokers and portfolio managers and cobblers and deli cashiers, thanks to the visionary work of the Lower Manhattan Cultural Council. LMCC is a local nonprofit which – among other things – created a workspace grant, in which businesses donate unused office spaces in lower Manhattan for temporary use as art and writing studios. I am among the writers this year, and this is where Julie Patton came to speak our group as we perched on broken office chairs in this space which could easily have been sitting empty, but instead is filled with making, and discussions of making.
My office.
V.
Places like Cleveland (or Detroit, or Baltimore, or East Berlin in the 90’s) offer us a gift, at great cost to themselves, by making vacancy visible. In fact, unused space is everywhere: in New York office buildings, homes, spiritual lives, gardens, relationships. It can be destructive or fruitful, depending on how we use it.
One of my favorite lines from Psalms reads, “The stone the builders despised has become the cornerstone” (118:22). I don’t pretend to understand vacancy’s economic causes or implications. I do know, however, one possible outcome, thanks to my months writing in this empty office building: room for noncommercial creativity, for experimentation, for art. This space is created specifically because others have rejected a place. In short, it is a Salon des Refusés, a Full Cleveland.
In a brilliant moment, Julie Patton writes, the artist finds that there is truly nothing special about 1387 East Boulevard. It is a place, just like any other.

Photo caption: “Congregation” (Nina Samelle) can be found at the Salon des Refusés MySpace album.
This is Alicia’s second post for Get Behind the Plough.