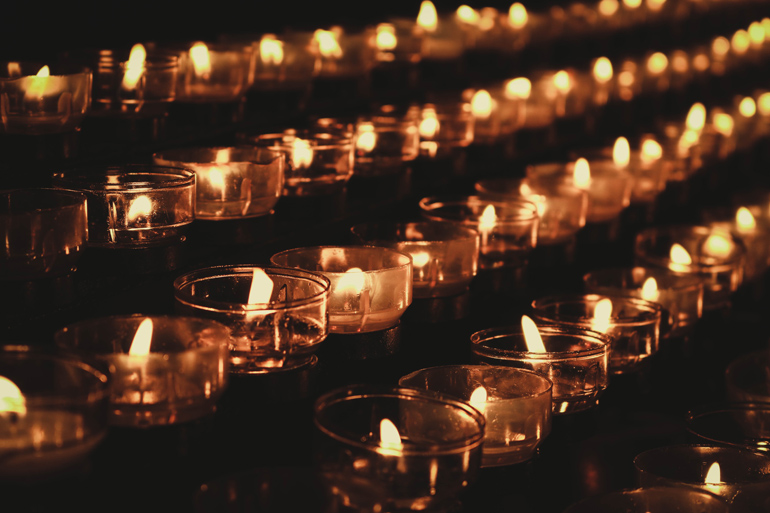 This month, I read work concerning religion in one way or another, though the chapbooks here are not dominated by or entrenched in it as a theme. Instead these three writers use religion and spirituality as a lens through which readers can view many aspects of their poetry.

“I needed saving yesterday” (line 1) reads the opening poem’s first line in Justin Phillip Reed’s A History of Flamboyance. Saving, though, the rest of the poem teaches, is relative: “stole your dogtags for a bookmark, fucked a tow truck driver / in your bed, lit your incense to kill the stink of poppers” (lines 2–3). Reed’s speaker carves out his own rules for saving, but much of the language he uses to tell the story is inspired by Christianity:

Last night a moth took to your ceiling,
beached in the grace of a light bulb,

the wings folded and in repose as though
in confession. (lines 5–8)

Metaphors of religion are accompanied by imagery of an upbringing that in part happened in the pews. In “A New Pair of Hands & a Stranger,” readers see “the choir olording / behind the deacon’s / slim sway & croon” (lines 13–15). The speaker draws a blurry line between pleasure and pain in this poem:

I both lost
the distinction between
being healed & being

Reed addresses many aspects of a religious life, yet his speaker does not have certain faith in any one god. His gods are the idea of god translated onto men and memories he loves or beds or worships or all of the above. The title of the list poem, “You Construct Intricate Rituals,” as well as references in the chapbook to myth and fable, illustrate how the speaker’s spirituality doesn’t take from only Christianity’s customs and vocabulary but also from different ways of making meaning. Within but not contained by this spiritual framework, the chapbook explores, with elegance, mother-son relationships, poverty, sex and the body, coming out, psychiatric wards, and depression. And of course, flamboyance: in “Bless Me,” the speaker says, “Once again the white-haired deaconesses / have taken me in their hats . . .  / Lord, let me die / in a hat like this, with a big white ribbon / in a Baptist bow” (lines 1–2 and 8–10).

Though the word “church” doesn’t emerge until the fourth poem in Tiana Clark’s Equilibrium, the imagery and language of it appear sooner, slipping into phrasings and metaphors that discuss, amongst other subjects, blackness, body image, and exhaustion. In a poem about a single mother and her teenage daughter, “the baptism of sleep” (line 59) is a nightly goal, and in a poem about hair, “the altar of our vanity” has the speaker traveling a path to and from a salon to have her hair straightened. But it’s not until “Magic” that church itself takes center stage, relating a childhood desire for magic to a desire for faith in God. It is only when the speaker realizes, “I didn’t have to beg for it. God was already washing the dust off my feet,” (line 18) that she no longer has to fake “the swivel of spiritual intoxication” (line 7) she sees fellow congregants possessed by.

Desire drives much of Equilibrium. The title poem begins, “Took me thirty years to say / I’m glad I don’t pass for white” (lines 1–2) and has a caesura like the lifeline of a palm snaking down its center, as if this old unrequited want along with this realization are tantamount to the three-decade journey. The speaker has had the power all along, to be filled with God, to be happy in her skin, with her hair in its natural state, and more.

Accompanying the speaker on this journey that leads to acceptance are a well-realized cast of characters. There are strong women: “Bessie, Billy, and Simone” (line 44) are with the speaker in “Waking in the Vanderbilt Psychiatric Hospital,” and “Mother shimmers when she sings in the choir” (line 1) in “Black Champagne.” There are absentee fathers in “A Blue Note for Father’s Day,” where “with or without you, I know how to kneel // before imperfect men” (lines 18–19) and the prose poem, “Triptych for my Father,” where he is “a myth, an absent god, but a God.” There are those imperfect men themselves, and lust for them, as in “A Psalm for the One,” where “An altar for his drossy hands was my body” (line 13). Finally, there are digital ghosts of the recently deceased, innocent men and women murdered by the police, as in “Broken Ghazal for Walter Scott,” featuring “A video looping like a dirge on repeat—” (line 16) and also a poem after Emily Dickinson, “Sandy Speaks,” where:

Sandy speaks to me
beyond her grave
her voice on YouTube—
ricochets. (lines 2–5)

Sarah Caulfield’s Spine takes on what God means to someone who does not conform to what believers must conform to. Caulfield frames her recognition of what she now and no longer believes throughout this chapbook. In “lapsed,” readers learn of her transgressed Catholicism, yet the saints she learned in her youth still show through the speaker’s cracks:

These cracks are of illness, both bodily but also seeing herself as different in the eyes of others. The speaker apes the motions of her former faith, idolizing the saints, speaking versions of prayer infused with the world she inhabits, and alluding to Biblical characters, but it is clear, as “lapsed” ends, that her faith is distant if not extinguished: “i want to believe, but i can’t open my eyes long enough to see the light” (line 21).

In “Ten Hail Marys’ Worth,” she admits to lying at her First Confession and says, “That’s religion for you; it really is what you have failed to do” (line 6). Where religion fails, “self-mythologizing” succeeds, an act she is accused of by someone in “the last great loves.” In response, the speaker muses, “You do have a point. At least, I tell myself, I am consistent” (part 1). In the same poem, the speaker, despite having replaced the Catholicism she has lost faith in with self-mythologizing, can’t move past old patterns of belief and says, “I think I loved you, but my priest never prepared me for that. I think I want to forgive you, but though my priest drilled me in that, the words fall empty” (part 8).

Being unable to let go of the parts of religion that shape the way she sees things, in “To The Girl I Was” the speaker admits, “I don’t want to believe in a God who let us down like this” (line 16), speaking aloud what so many lapsed or questioning believers of a variety of faiths often grapple with.