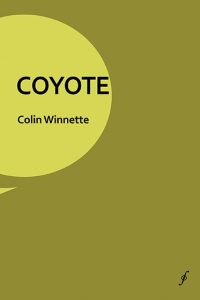 It’s a natural tendency to summarize, to distill entire constellations of events and details into a single swallow of information. Near the beginning of Coyote, Colin Winnette’s protagonist attempts just this, saying “I tell the same story every time: we put her to bed, and when we woke up she was gone.” The “she” in question is the young daughter of the story’s two main characters, who vanishes in the night with no clear explanation. What follows, what makes up the rest of the story, are all the murky details filtered out of that simple synopsis: a curious detective, a bathroom filled with bees, a toxic marriage, and an imperfect memory.

Winnette’s narrative comfortably weaves back and forth through the timeline, from shortly after the disappearance, to before, to several months later, seemingly at random. As the mother says, “My thoughts are always turning elsewhere.” Still, there’s an occasional refrain, a question posed to resituate the reader: “What was our daughter like?” When the question first appears, it’s presented with a concise list of characteristics: “She preferred her water warm. She wasn’t scared of anything, even the coyotes.” But as the story progresses and the parents try so hard to keep their daughter’s memory alive, more particulars slip from their grasp, until halfway through the book the question appears on a page by itself, unanswerable and infuriating.

Tucked inside the larger narrative is a story of domestic abuse. Physical violence is a constant presence, tugging from below like an undertow and occasionally breaking the surface, yet nothing so clear cut as a victim/victimizer relationship takes form. Husband and wife both take turns as the instigator, attacking one another with equal malice if not in equal measure.

Every so often a new piece of information portends the possibility of a straightforward explanation, only to reveal another set of questions. The mother stumbles upon a pair of bodies, but their deaths are decidedly unrelated to her daughter’s disappearance. The detective on the case is an enigma, unknown by the other police officers. The mother cannot even say for sure what day she gave birth to her daughter.

With Coyote, his fourth book, Winnette is just beginning to hit his stride, carving out his own place in the landscape of contemporary literature. Sharp and delicate, this story is as fragmented as the narrator’s shattered frame of mind, all the more satisfying for its uncertainties.

Thomas Michael Duncan writes fiction, fact, opinion, and the occasional bit of nonsense. A recent escapee of upstate New York, he lives in Lexington, South Carolina. You can haunt him on twitter @ThomasMDuncan.