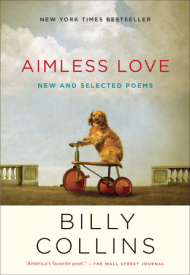 Three thousand miles away from my library—most of it translated literature, most of it tortuously postmodern—I turned in a lonely hour to my dad’s hardcover copy of Billy Collins’ Aimless Love. I’d never read much of Collins, and what I’d read I hadn’t read seriously. Collins is enjoyable, and I distrust joy on principle. The Concerned Readers of Serious Poetry know that Collins isn’t a true poetic genius because 1) we can understand what he’s saying and 2) his books actually sell.

Yet Collins’ poems were, on the whole, far more fulfilling than I’d expected. They exemplify not just a powerful poetics that can actually move people emotionally but a literary politics that find myself agreeing with. Take “Orient,” included in Aimless Love and originally published in the January/February 2013 issue of The Atlantic Monthly:

You are turning me
like someone turning a globe in her hand,
and yes, I have another side
like a China no one,
not even me, has ever seen.

So describe to me what’s there,
say what you are looking at
and I will close my eyes
so I can see it too,
the oxcarts and all the lively flags.

I love the sound of your voice
like a little saxophone
telling me what I could never know
unless I dug a hole all the way down
through the core of myself.

Before looking too closely at the poem’s language, it’s worth remarking that Collins’ poem is eminently readable. Collins respects the sentence as the basic unit of thought. We’re trained from our youngest days to expect the balanced structures of subject and predicate, and Collins obliges. The same can’t be said of many contemporary poets. Anyone who’s been to a poetry reading knows that some poems are wonderful when read aloud while others fall awkwardly flat. These latter poems may make some sense on the page but—inasmuch as they can’t be read aloud for immediate comprehension—they aren’t readable. Rather than forcing the reader or listener to arduously decode the basic meaning of what’s being said, Collins uses undemanding vocabulary and syntax in order to more directly raise larger concerns of character, theme, thought, and ethics.

When T.S. Eliot begins “The Wasteland” with a quotation from Petronius in the original Latin and Greek, he is in effect saying, “You must be this educated to read my poem.” Eliot relies on a complex mechanism of traditional imagery and symbolic structures to score his aesthetic points. That doesn’t make his poem pretentious or elitist, but it does make it (for many) prohibitively difficult. Collins’ plain-spokenness, on the other hand, welcomes greater numbers as they are, including readers who (by virtue of class, sex, race, or any number of factors) might not have had the opportunity to learn a half-dozen European languages. I’m not saying one is better than the other, but one is understandably more popular than the other.

Yet his popularity doesn’t make Collins any less of a thinker. I would argue it makes him a stronger thinker. Anyone who’s taught knows you have to come to the student a little bit. You catch more flies with honey, or, as Tasso put it, sometimes you need to put honey on the medicine to make it go down smooth.