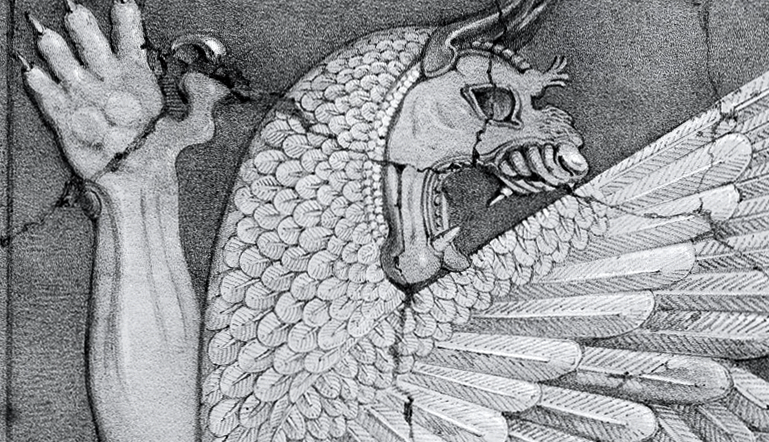 The posts in this series, Confronting Our Environmental Apocalypse, consider various traditions, ideas, and or authors in the search for imaginative ways to give voice to our current ecological disaster.

Lost to the world for several millennia, Gilgamesh reappeared in 1853, when an archeological team in present-day Iraq discovered a collection of broken clay tablets containing a long poem that predated the Bible and the Homeric epics by as many as 1000 years. Once it had been translated from its original cuneiform, a script that had only been recently deciphered, the early readers (or rather, re-readers) of Gilgamesh found this fragmented epic to be more than a historic relic. To their astonishment, they discovered a masterpiece that spoke to their deepest anxieties.

The epic follows the adventures of Gilgamesh, a demigod and tyrannical ruler of Uruk who, in failing in his quest for immortality, must come to terms with his mortal fate. Understandably, an epic concerned with the quest for immortality and realizing the folly of such a quest may sound silly to our modern ears. But the desire to overcome our mortal limitations, exceed the bounds of our organic nature, continues to burn within us. What is the quest for immortality but the quest to free oneself from the conditions that make us mortal, earthly things? Don’t we all, in the 21st century, still crave such freedom? Though the quest for the Holy Grail or Fountain of Youth may have been pre-scientific myths, we continue to chase their auras, albeit in a more rational manner.

And we have had great success.

There has never been a point in human history when we have been more free from our natural environment, and more removed from biological and environmental limitations. We have eradicated diseases, engineered crops and animals for a continual food supply that is no longer dependent on weather and environmental conditions, heating and cooling systems bring us comfort and it looks like CRISPR and other forms of genetic engineering will allow us to overcome our genetic blueprint.

We are still motivated by old hopes of immortality, that inescapable paradox where we want to overcome life, in order to more fully live. This is where Gilgamesh can speak to us. At it’s core, it is a story about learning to be human, and accepting the limits that come with being a creature of this earth. It is a story we urgently need to hear.

The first half of the epic is largely concerned with the heroic exploits of Gilgamesh and his friend Enkidu. Hungry to make a name for themselves, to achieve “a feat that never was done in the land,” the two successfully seek out and kill the monster Humbaba, then fell the Cedar Forest which he guards, and later defy the gods by slaying the Bull of Heaven. Of the two, Enkidu is the more level-headed, while Gilgamesh is more haughty, more eager to perform deeds that will guarantee his name will last forever.

It is fitting then that it is Gilgamesh who must face the aftermath of Enkidu, his dear friend and sometimes lover’s, death. This is the turning point of action, for Enkidu does not die in the heat of battle, he dies in bed, in a feverish fit. After the danger he has faced and the risks he has taken, he dies in the same quiet, inglorious way millions of others have died.

“My friend, whom I loved so dear,” a shattered Gilgamesh mourns in Andrew George’s sparse translation:

Six days I wept for him and seven nights:

I did not surrender his body for burial

until a maggot dropped from his nostril.

Then I was afraid that I too would die

The fear of death, what’s more, an ordinary death, traumatizes Gilgamesh and in his despair, he sets out to find the secret of eternal life. The journey brings him to the end of the world, where he is denied the secret of immortality. Having failed in his quest, Gilgamesh returns to his home of Uruk, burdened with the knowledge that he, like all others, must die.

Despite his evident failure, the subtitle to the poem is: “He who saw into the deep,” suggesting that Gilgamesh achieved some sort of wisdom. As readers, we are left to wonder what it was he saw in the deep. It may not have been the secret of immortality, but something far more mundane, a truth of mortality we all know but wish to deny. Was he reconciled to the fact that despite immense feats and god-like powers, he was a mere being of the earth, subject to change, to the unstable process of life?

From a geologic perspective, the effects of climate change are nothing new. The earth has been freezing and thawing, heaving up continents, spitting out new lands, catching fire, flooding and getting hit by meteors for several billion years. Though life on earth could often be characterized as one environmental catastrophe after another, the fact that humans are responsible for the current environmental catastrophe presents an opportunity to reexamine just how earth-bound we are. It forces us to ask whether we can, with our technological brilliance and startling innovations, be more than earthly beings.

It seems that we now stand between two poles. On one side are the transhumanists, techno-utopianists and would-be Martian colonizers who believe we are in a position to rise above our biological, even planetary restraints. These movements see technology as the great savior that will, among other things, make the earth a better and more convenient place to live, grossly prolong lifespans, and even enhance us to be smarter, stronger and healthier than nature could have ever produced. On the other extreme is the very romantic, and some might say privileged, “back-to-the-land,”mentality, where people advocate doing without many of the modern world’s conveniences or technological distractions and advocate leading a life that is more intimately connected, and in tune, with the life cycles of the earth.

Where is the balance between these two poles? I’m in no position to say, but in Gilgamesh I find an ancient guide to our modern world. For it tells us that we are still beholden to this world—that our life, our earthly condition cannot be surpassed. We cannot do without this harsh and beautiful world; we cannot do more than this mortal life and the earth that sustains it.