Home
»
Authors
»
“Different Paths Up the Same Mountain”: An Interview with Adele Kenny 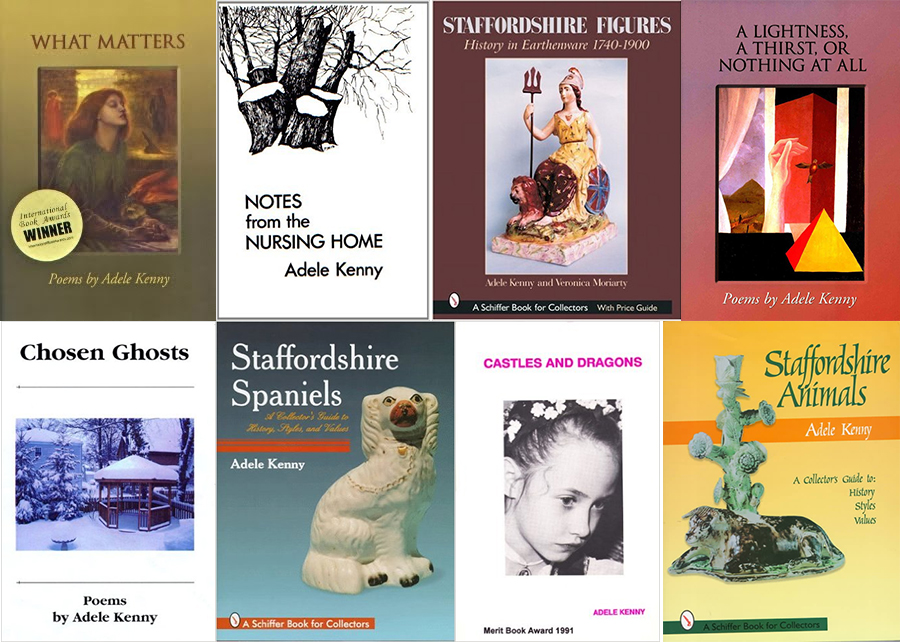 Adele Kenny’s poems speak from the head and the heart, giving thoughtful scrutiny to the moments that move us—whether to wonder or to grief. She is the author of more than 20 books of poetry and nonfiction, including What Matters, winner of the 2012 International Book Award for Poetry, and A Lightness, A Thirst, or Nothing At All, a collection of prose poems. She is also a strong advocate for poets, most notably in her work as poetry editor for Tiferet Journal and founding director of the Carriage House Poetry Series in Fanwood, New Jersey. We caught up at the start of the new year to talk about writing, metaphorical mountains, and what poetry and dancing have in common.

Matthew Thorburn: What draws you to prose poems? Does writing in prose present unique opportunities for you as a poet?

Adele Kenny: It may be that my initial romance with prose poems derived from past experience as a ballet dancer and dance teacher. I’ve always been aware that poetry uses space just as dance does, so I was very conscious of the prose poem’s use of space and how different it is from other forms of poetry.  Then there’s the intriguing name—prose poetry. How can poetry be prose, and how can prose be poetry? I don’t believe that one can be the other, but a combination of the two does form its own genre, a certain duality that I find exciting. Prose poems aren’t bound or defined by lines (they look like paragraphs, and are box-like in appearance), but they still employ the techniques and tricks of poetry.

Importantly, prose poems are strongly rooted in imagery and metaphor. Imagery is the engine that powers my poems and, for me, it’s even more imperative in prose poems. Prose poems also contain complete sentences and deliberate fragments; they speak the language of dreams, and give a nod to the surreal. They often include strange layers of language in which what appears to be abstraction really isn’t.

I find it a particular challenge writing prose poems, a challenge that forces me to stay inside the “box” but still create work that’s both haunting and lucent—work that contains subjects imbedded with sub-subjects but presents an integrated whole of language, meaning, and form.

MT: Are there poets whose prose poems have especially inspired you or served as models for your own writing?

AK: After What Matters was published in 2011, I had the feeling I always get after a writing project is completed—a kind of panic that I might never write anything again. I thought a lot about how we poets tend to write the same poem in different ways, and I didn’t want to do that. I was sure anything new I might write couldn’t be purely narrative or lyric. At around that time, I came across a copy of Charles Simic’s The World Doesn’t End, and I was startled by what he did with the prose poem form. I experimented with some prose poems and discovered a comfort zone that I didn’t expect. Sometime during the process, one of the journals for which I write assigned me an interview with Charles. Talking to him moved me further into what would become a three-year project and this book.

MT: There’s a meditative, reflective quality to these poems that really makes this a cohesive collection. Would you talk about how this book came to be?

AK: Lightness follows my earlier collection What Matters, which began with a diagnosis of breast cancer, how that impacted and changed my life, and the conditions of survival. Lightness picks up that journey and moves it forward spiritually. The poems speak to the ways in which we find ourselves and learn to be comfortable with who and where we are. The poems in Lightness focus on the spiritual journey, one that we all share—it may be that we’re taking different paths up the same mountain, but we are on the mountain together, and our poetry tells us that we’re not alone.

MT: How does a poem start for you?

AK: For me, a poem always starts with a single image. Sometimes I write the image down, and sometimes it just lolls around in my mind for a while before I commit it to paper or computer. In either case, it’s always the image that triggers the poem, and more often than not I have no idea where the image (or the poem) intends to go before I start writing.

AK: I’m working on a group of ekphrastic prose poems—many already published in journals and anthologies. It’s not quite a collection yet, but the work is moving in that direction. My goal is poetry that challenges the ordinary and means more than the words it contains.

AK: I’ve read a number of poetry collections in the last year or so, and many have touched me with their  linguistic wizardry, honesty, and poignancy. One that particularly moved me is Michael T. Young’s The Beautiful Moment of Being Lost. This is a book about histories and journeys. There’s a strong sense of self-discovery in the poems and an even stronger sense of redemption. Young’s intelligence and heart in these poems offer extraordinary distinctness of feeling and skill.

Watch a video of Adele Kenny reading her poems here.