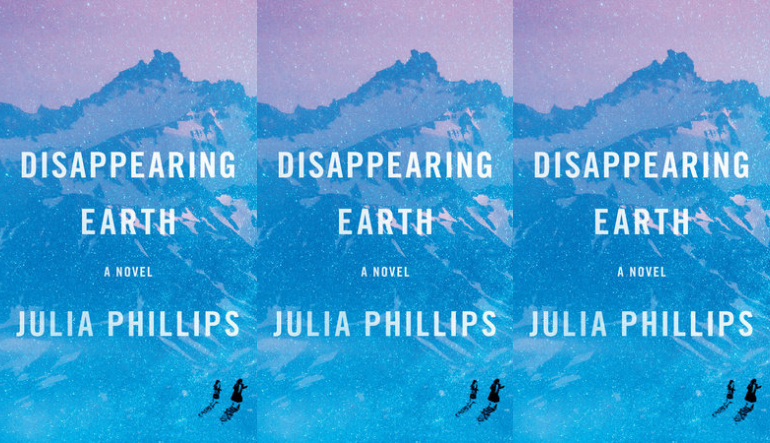 Two little girls—Alyona and Sophia—go missing at the start of Julia Phillips’ wonderful debut novel, Disappearing Earth. We get to know the girls—who live on the Kamchatka Peninsula, in the far east of Russia—during an idle summer day and then watch, full of despair, as the girls climb into a strange man’s car. We are unable to stop them. They disappear from their parents’ lives and, largely, from the novel. The book then moves forward in time over the next year, each month narrated by a different woman or girl who is somehow connected to the girls’ disappearance. We see, over time, as their story disappears from the headlines, as the police move on to other matters. We learn about this beautiful yet stark peninsula, accessible only by air or sea, and we get to understand the racism and classism that permeates it, the ways in which the post-Soviet world has changed the lives of these Russians. Mostly, we dig deeply into the lives of girls and women, lives that are often difficult and upset by trauma, lives that offer little in the way of hope or joy.

This is a novel about women; men in the book are often absent or portrayed as less than ideal. Katya, in the second chapter, is dating Max, a handsome but ineffectual man who has forgotten to bring the tent on their camping trip: “Max was simply the sort of person, like so many others, whom she had to supervise.” Natasha, who appears later in the novel, has a husband in the military, working on a ship, leaving her to raise their two children alone. She thinks the following about their relationship: “The story of their marriage: a little love, a little rage, a lot of ocean water.”

An underlying current of wildness unites these women and girls, most of whom are searching for something more. Zoya, the wife of a police detective, is home alone with a new baby: “She was not a woman made for sitting home and nursing. She craved things darker, strange, out of bounds.” Ksyusha, a Native college student from the north, reflects on how the other students treat her: “They spoke to her like she was part herd animal herself.” Family is often seen not as a comfort but as a holding pen of sorts. For many of these women, escape is simply not possible.

Another girl, Lilia, is also missing, but has been missing for three years. Because she was an older teenager when she disappeared, though, and because there were no eyewitnesses to her disappearance, there is hope that she was given the power of choice: that she elected to disappear, rather than the alternative—that she was abducted or killed. Ksyusha, who knew this girl from her hometown, understands why Lilia may have made the choice to disappear: “The belief that nothing better would come. The trap of family. The plan in secret for some desperately needed escape.” Lilia’s sister, Natasha, trapped with her two children, wants to agree:

Lilia was kind and clever and had the wisdom to keep her views private. She was living in Moscow, or St. Petersburg, or Luxembourg. Natasha liked to picture her in Europe. Lilia was an elegant young woman now. Maybe she had finally enrolled in university. Maybe she had gotten married. Maybe she even had a child or two of her own.

Natasha tells herself stories about Lilia in order to move forward, to not allow her sister’s disappearance to take over her own life. Storytelling is a major thread here, with the telling of stories starting and ending the book, and appearing throughout. Disappearing Earth is closer to a traditional novel than Elizabeth Strout’s Anything is Possible or Sherwood Anderson’s Winesburg, Ohio, but its use of storytelling functions in much the same way, each chapter a story unto itself, the stories layered on top of those that came before, the threads and themes accruing as the book builds. The book never utilizes a point-of-view more than once. One of the downsides of this type of novel, of course, is that in not returning to characters and their particular stories, the reader may feel dissatisfied. In later stories, we catch glimpses or hear whispers of what’s happened to earlier characters, but there is a suspension here, a feeling of loss. This structure, though, nicely speaks to the loss of the girls, and allows that sense of incompletion to underscore the possibility that there may not be an ending at all, much less one that is fulfilling.

One of the smartest narrative decisions that Phillips makes in the construction of this novel is not to introduce us to Marina, the mother of the missing girls, until close to the end. Meeting her earlier would have tipped the book into sentimentality and familiarity—sadly, we have seen a grieving mother in the immediate aftermath of loss before. By waiting to focus on Marina, we get to know her as the trauma of losing her children has settled into her, the grief taking over the person she once was: “Everything that once propelled her was now gone. She used to be a storyteller, she used to have a sense of humor, she used to be a mother, but now she was—nothing.” We feel that the loss of her children is something that she carries with her; she relives the trauma moment after moment, day after day, never able to let it go.

Phillips excels in writing about women who are in the midst of experiencing such trauma. We spend a day with Revmira on the anniversary of her first husband’s death, a day in which another horrible event happens. Phillips takes us deep into Revmira’s psyche, showing us the way that trauma renders numbness, that living with grief is like living in slow motion: “This date took him and pulled her down after, grief determined as gravity. But now she would live. She had to. It was what she did: live while others could not. There was no pleasure in it.”

But there is pleasure to be had in reading Disappearing Earth, even in the midst of such grief and despair. Phillips is a beautiful, assured writer, one who knows how to create fully-developed characters, a marvelous sense of place, and a constant forward momentum. We learn about this unfamiliar country, filled with interesting and complex characters, while seeing the echoes of our own world and ourselves on every page.

Fiction, though, functions differently from life, where girls disappear and we might never know the outcome. The story never ends. Every novel must; we get to experience a sense of completion here, to feel the threads pulled together in a satisfying way, to learn that even in these grim lives, in this stark place, there is reason to hope.