A few months ago, I wrote a post on the best bromances on television. Since then, I’ve wanted to write a similar post on female friendship, but I came up empty when I hunted for good examples. There are so many storytelling techniques that current scripted television gets right on the money—fascinating plot twists, complex characters, and unique settings, just to name a few. So why are female friendships still relegated to the rare and typically shallow duo riddled with jealousy and competition?

Never fear—this isn’t going to be a post investigating gender inequality in the arts. I’ll leave that to the experts. Instead I’d like to take a more personal approach. You see, I wasn’t that surprised to find a lack of authentic female friendship represented onscreen—but I was surprised to find that lack in my own work. When I revisited my draft-in-progress, I found the same hackneyed formulas television writers so readily rely on. So I decided to give my writing a four-part antidote, and here it is.

This concept is something I also mentioned in my post on character differentiation. The reason so many televised female friendships feel scripted and inauthentic is because they are built on the truism that “opposites attract.”  Using this method as creative inspiration will inevitably result in labels: the prude and the slut, the rich girl and the poor girl, the nerd and the ditz. Using a single word to describe a character is as harmful as doing the same to a friend. It stalls plot lines and friendships both.

Instead, let’s ask ourselves: how can I foster a connection between my characters? For example, let’s consider the friendship between Angela Chase and Rayanne Graff on the stellar though short-lived MTV series My So-Called Life. At first glance, the two appear to be polar opposites. Angela is known as the studious good girl (with a serious crush on the poetically elusive Jordan Catalano), and Rayanne is seen as the wayward trouble maker. But Rayanne already understands what Angela is in the process of discovering: sometimes, we just want what we want.

Rayanne offers this insight to her friend:

“You want Jordan Catalano in actuality because…there is no because. You just want him. Only you’re programmed to never admit it.”

This duo works because Rayanne is smarter and more tender-hearted than anyone gives her credit for. The antidote here? Let your character step out from behind her label.

Where Honesty Resides and Hides

Nothing exposes a character’s inner psyche quite like revealing how and why she lies—and the same is true between friends. What do your characters lie about, specifically to each other? Last winter I read a searing essay collection about female friendship, titled She Matters by Susanna Sonnenberg. I loved the fierce intimacy Sonnenberg developed with her characters. Her friendships never turned into Hallmark poster portrayals; they remained unbridled, and therefore fully authentic because the risk of losing them always felt ever-present.

About a close friend of her youth, Sonnenberg writes:

“’Total honesty,’ we always promised. Bravery in front of each other, because of each other. Even if we were faking.”

In three sentences, Sonnenberg relates the depth and breadth of a friendship, even the possible gallantry of speaking untruths. To lie in a selfless way, even with the damage it may cause? That is a friendship I want to read about.

If lying is too overt an action for your characters, consider silence. The simple act of not speaking (and of drawing that out on the page) can conceal just as much as a lie might. What are your characters silent about?

Women Teach Each Other

I’m not just talking about applying mascara or baking cupcakes. I’m talking about things that have limited connections to the opposite sex, things with personal merit. Bad romantic comedies tend to use this “let me teach you” method to unite fledgling couples: let me teach you how to sail a boat! How to catch a fish! How to bet on horses!

But friends woo each other this way, too. Onscreen portrayals of one woman teaching another tend to exemplify suffocating gender norms rather than the bond that teaching can create. My kingdom for a scene where a young woman recommends a serious book to a friend. Just one. 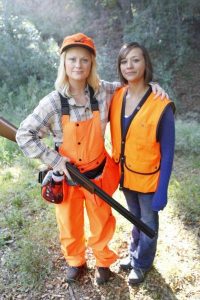 Newsflash: women don’t just talk about sex. We talk about politics, technology, food, literature, art, real estate, economics, finances, and television, for starters. We do things together other than going to yoga or to the beach.

Ann Perkins and Leslie Knope on Parks and Recreation get my vote for best female friendship on television right now. They’ve filled in pits together, gone hunting, fought in bars, bailed each other out of jail, ran a political campaign—and they’ve cooked pancakes, dished on love, and borrowed each other’s clothes. They make each other better, stronger, smarter.

Two of my closest friends taught me how to play soccer and how to make a quilt. They’ve taught me about making martinis and sculpting with clay. I would never itemize them as “artist” or “athlete” or “mother” or “wife.” They are artists and athletes and mothers and wives. Our fictional characters (and the stories we tell about them) deserve the same kind of respect.

Often times, a woman’s first friend (or enemy) is her mother. When I think of the past, say, ten books I’ve read (by a smattering of male and female authors), all but one features a mother who’s been rendered ineffectual either by a physical ailment or some kind of mental illness. Art reflects life, of course, but it seems that for some reason, it’s difficult to get a complex mother on the page without resorting to one of these two afflictions. It’s right up there with the frequency of “distant father” syndrome.

There’s nothing wrong with the tropes themselves, but their regularity should give us pause. What is it that makes writers reluctant to cast a strong, multi-layered mother? How might the emphasis of your story shift if you tackled it? As a writer who killed off a mother character in my work-in-progress, these are questions I’m asking myself, too.

In She Matters, Sonnenberg’s description of her mother defies categorization while giving us a glimpse into how this seminal relationship set the tone for all that would come after:

Women, my young mother had shown me, are the festival. Women are like this: fierce, supreme, capable. And devious and cunning. We lie, we win. And we’re this: alluring, witchy. Women make throaty appeals, rant purely, persuade. We are right, but don’t trust us. Prize loyalty, but don’t count on me.

In the acknowledgements of In Search of Our Mother’s Gardens, Alice Walker offers a different, though no less complicated, picture of her mother:

And for the three magic gifts I needed to escape the poverty of my hometown, I thank my mother, who gave me a sewing machine, a typewriter, and a suitcase, all on less than twenty dollars a week.

Two different mothers, two different daughters, none of which could be termed “ineffectual.” Women shape and are shaped by each other, for better or worse. How might they help your story find its best form?