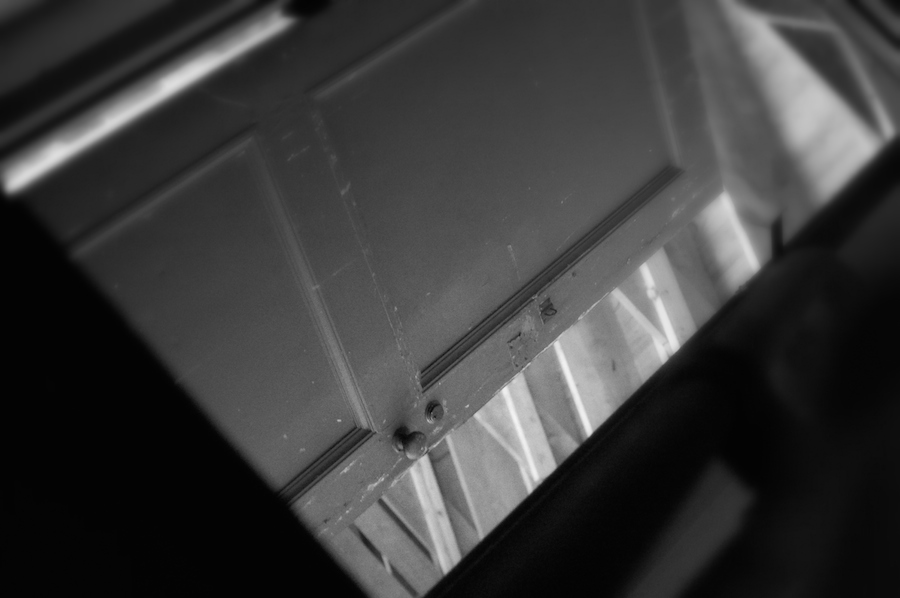 There’s a little door in the corner of our almost-three-year-old daughter’s bedroom, and she’s very convinced something is going to come out of it. It isn’t even a door, really—it’s an access panel for getting at the problematic plumbing in the bathroom next door. I’ve come to really, really wish it were somewhere else in our house. I blame this door, in part, for the lengthening of her bedtime routine in recent months. As soon as she’s under the covers, her eyes go right to it, and she peppers us with questions: No wolves gonna come? (What is it about wolves? We can’t seem to get away from them—they’re all over every fairytale, more children’s movies than I would have believed, etc.) No witches gonna come? No ghosts? No spiders? And finally the catchall: No scary things gonna come?

I think I expected toddler-fears to be more amorphous. This terror has such a narrative quality. It’s clear that my daughter’s mind is telling her scary stories: taking a door and experimenting with putting particular dark shapes behind it.

Fear and storytelling both involve this kind of projection, I think—this kind of summoning. Many of our worries are really story-making about the facts we have. We read them and see not just the facts themselves, but the larger, as-yet-unseen threats they might suggest. (See Karen Thompson Walker’s great TED talk on fear as story, and how we might learn to read our own fears in ways more likely to benefit us.) Fear creates an amping up that is like the amping up of plot, that ascending hill on Freytag’s pyramid.

Maybe this is part of why literary characters’ fears make for such compelling reading, too. Terrified characters are extraordinarily suspenseful on the page. They become echo chambers for the escalating tensions around them, and they allow us to experience those tensions in an intensified way. Their terror also makes a bridge to the reader. Perhaps because all of us have been afraid at some point in our lives, even unsympathetic characters often draw, in their fear, our identification.

Macbeth and Lady Macbeth are classic examples: bloodthirsty, goodness-destroying, and viperous from the beginning, but who can look away once their fears of what they’ve set in motion start to undo them? When Macbeth murders Banquo and is then visited by his ghost, the reader’s better angels may apportion most actual sympathy to the victim. But the heart, I think, thuds right along with Macbeth’s as he shouts at the apparition:

Avaunt, and quit my sight! Let the earth hide thee.
Thy bones are marrowless; thy blood is cold;
Thou hast no speculation in those eyes
Which thou dost glare with.

There’s something so terrible in the impossibility of those sightless, sighted eyes—terrible enough that we have to see them too, have to feel what they would feel like, on us. Lady Macbeth’s fevered hand-washing, later in the play, has the same effect: we watch her try again and again to wash away long-gone blood that will never be gone for her—“Out, damned spot, out, I say!”—and it’s hard not to catch her mood, her madness.

So many other rattled characters, reeling after different kinds of blasts, stagger their way through stories—commanding the reader’s attention and empathy. The shell-shocked Septimus in Virginia Woolf’s Mrs. Dalloway has been turned by the traumas of war (among them the death of his friend Evans) into a misreader of the world around him—or, perhaps, the only accurate reader. In the middle of a conversation with his wife in the park, he sees death coming for him, in a passage that’s still one of the scariest I’ve ever read.

That word ‘time’ split its husk; poured its riches over him; and from his lips fell like shells, like shavings from a plane, without his making them, hard, white, imperishable words, and flew to attach themselves to their places in an ode to Time; an immortal ode to Time. He sang. Evans answered from behind the tree. The dead were in Thessaly, Evans sang, among the orchids. There they waited till the War was over, and now the dead, now Evans himself—

‘For God’s sake don’t come!’ Septimus cried out. For he could not look upon the dead.

But the branches parted. A man in grey was actually walking towards them. It was Evans! But no mud was on him; no wounds; he was not changed…

We are plunged by all that heady, swirling prose into full and giddy terror. Woolf makes us contemplate what it would be like to exist in that state with no real expectation of a reprieve, and the suspense of wondering (knowing, but still wondering) what end there can possibly be for Septimus is part of what keeps us turning the pages. (That and the language, which never fails to amaze me.)

I wonder if the intensity that comes from the marrying of fear and narrative is part of what’s behind recent years’ oft-noted crop of excellent dystopian novels, too: books like Laura van den Berg’s Find Me, Emily St. John Mandel’s Station Eleven, Benjamin Percy’s The Dead Lands, Edan Lepucki’s California. These books take the world and replace it with a nightmare. We all recognize nightmares. It comes pretty naturally, for most of us, to put ourselves inside them.

When we see a door, the storytelling parts of our minds expect for it to open. For something to be on the other side.

No, I tell my daughter, when she asks her questions. No, no, no, none of those things are coming. She believes me, for now.