Home
»
Book Reviews
»
First Down Te Ching: On The Tao of Chip Kelly 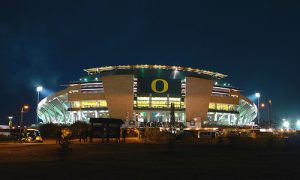 The house that Chip built.

Today marks the beginning of the 2014 NFL season, America’s favorite consumption-based present-time activity. Odds are that a family, friend, or loved one in your life has already burrowed themselves away for an evening immersed in a fantasy football draft. These same people will fall off the grid each weekend from now until the Super Bowl in early February, whole afternoons if not entire days absorbed in channel-hopping across a regenerating bank of games until they sag, prostrate, in front of empty pizza boxes. I am absolutely one of these people.

Just as a person can drive a car for their entire life without really knowing how, exactly, the machine works, a person can become a lifelong die-hard without really knowing how football works. The layers of tactics, strategy, and technique behind each play are immense. The game itself is so large and contains so many moving parts that television coverage has yet to figure out a way to deliver the entire field to the viewer: on most plays, when wide receivers run down the field to open themselves for a pass, they and their defenders are simply allowed to run past the edge of the frame. It is viscerally satisfying to cheer on the booming tackle or epic touchdown grab without realizing the complex chain of events around the field that made the big play possible. Mastering that complexity, though, is why the men involved in coaching professional football are famously, universally workaholics. For a coach to piece together a winning game plan at the elite levels of football can only be the end result of a life’s work spent learning exhaustively at the altar of football.

Chip Kelly’s life sounds like the premise of a football movie that actually might be pretty good. Within his biography, there is the reassuring subtext that the true cream will rise all the way to the top: born and raised in New Hampshire, Kelly has spent most of his life as an assistant coach at the University of New Hampshire, itself a niche outpost far away from relevancy in college football. Kelly turned this unremarkable role into a notorious mad scientist’s laboratory, building one of the fastest, most furious, most successful offenses in the country at any level.

Kelly does not have kids, and if he is married, he is married only to football, spending his offseasons traveling–on his own dime–to meet with and learn from his fellow tacticians across the country.

It was on one of these self-appointed trips that Kelly traveled to the University of Oregon in Eugene, a big-time school whose football program was lavishly financed and outfitted by their corporate neighbors, Nike. Kelly’s learning trip turned into job interview, which turned into a role as assistant coach, which turned into the role of head coach. Having never previously been the head coach of any team, ever, Kelly won 46 games up against 7 losses in his four years in the job, taking the Ducks to the national title game in just his second year. NFL teams would come to Eugene to flirt with Kelly each offseason, and he resisted until the Philadelphia Eagles offered him the position as head coach. This will be Kelly’s second season as Eagles head coach–as Mark Saltveit reports in his book about Kelly, the coach’s annual salary has jumped from $62,000 to $6,500,000 in the span of six years.

The Tao of Chip Kelly, by Saltveit, looks at the coach as part-business leader, part-inspired philosopher. Although Kelly is short, stubby, eternally dressed in the goofiest of garments–a visor — and usually making delightfully sarcastic comments whenever reluctantly pressed by the media, Saltveit makes the intriguing and convincing parallel between Kelly and Eastern philosophers like Lao Tzu. Kelly’s short-sentence mottos–what would a football coach be without some snappy catch-phrases posted on the weight room wall?–lean compellingly towards the philosophic. “Win the Day!” became a guiding principle in Eugene, the drab practice day given as much weight as game day itself. “The Faceless Opponent” is another nugget that seems culled from Eastern texts of centuries previous. The lesson, there: to emphasize that the goal of the program is personal best performance, the team on the other side of the field almost immaterial–save for that team serving as a mirror to reveal the true talent level of Kelly’s own squad.

Even the words out of Kelly’s mouth, in full sentences, seem like koans passed down from mountaintop: “The area of improvement for everybody is everything. We’ll never arrive.”

Esoteric as Kelly may sound, Saltveit continually emphasizes that his actual coaching techniques are based in solid, common sense. Kelly has become famous for his unique practices, which are flurries of constant motion, punctuated by blaring music. Given Kelly’s tactical emphasis on a fast offense, running a fast and efficient practice makes total sense: “The goal is to run plays in practice not just as fast during games, but faster.” Kelly’s practices, ideally, equip players for games by making the games seem slow and methodical by comparison. Well, yeah. Sounds pretty good. Why are Kelly’s practice sessions so different from the norm, then? Another of Kelly’s continual emphases for his team is that the players consistently get over 10 hours of sleep each night during the season. Hard to get simpler than that.

The Eagles are likely to thrill so many of us this season with explosive scoring outbursts. You can learn to cheer for a football team in an afternoon, but it took Kelly his whole life to create the strategies–spoken in practically a different language–that would make his teams great.