Home
»
Critical Essays
»
Frame Stories and the Passage of Time 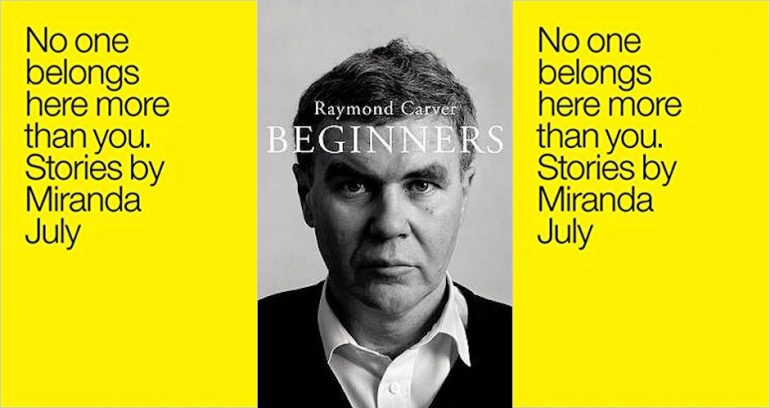 There’s always something tantalizing to me about frame stories, though they sometimes seem formally old-fashioned. When I think of frame stories, the books that come to mind are largely from the nineteenth century: Wuthering Heights, Frankenstein, The Scarlet Letter. But maybe what’s appealing to me about frame narratives is their aura of the outdated, their unabashed announcement that a good story’s about to be told, a story worth sticking around for. Of course, frame narratives aren’t limited to the nineteenth century and also aren’t limited to the novel. If one purpose of a frame story in a novel is to prime the reader to listen to what might be a long or meandering tale, what’s the purpose of a frame in a short story?

Recently I came across two contemporary short stories that use frames in interesting ways. Miranda July’s “The Swim Team” and Raymond Carver’s “Distance” (originally published and more popularly known as “Everything Stuck to Him”) are very different (though both deal with an unraveling relationship) but utilize frames for similar purposes: both frames position the main story being told as quotidian, not necessarily worthy of telling at all. In both “The Swim Team” and “Distance,” the main story is a tale the narrator has been prompted to tell. The frames thus begin to suggest a relational mode of telling—these aren’t stories being told out of a narrator’s private obsession but are drawn out at the urging of an eager listener.

“This is the story I wouldn’t tell you when I was your girlfriend,” begins the frame of Miranda July’s story. What follows is a story from the narrator’s young adulthood, when she was living alone and broke in a small town in Nevada. Since she won’t tell him the story, her boyfriend assumes she did something lurid when she was living there. The truth, as the narrator relates in the main story, is stranger than what he assumes: what she did in small-town Nevada was teach three elderly people how to swim but in the absence of a body of water. She taught them in her living room, using bowls of water on the floor to teach them how to breathe while swimming. She doesn’t tell the boyfriend the truth because, given his assumptions that she might’ve been “a kept woman” or something similarly scandalous, “the reality began to seem barren. And in time I realized that if the truth felt empty, then I probably would not be your girlfriend much longer.”

The frame addresses itself to the boyfriend and in doing so allows July to write about the relationship, and its failures, without showing the relationship itself. Because of the frame, we understand that it failed in part because the narrator couldn’t tell her boyfriend this story in its full weirdness and complexity—she couldn’t be fully honest with him. The frame also provides July with an engrossing way to show a relationship unraveling—this story about elderly people learning to swim in a broke twenty-something’s apartment in rural Nevada is more inventive than a more conventional story of a breakup. The frame, and the subsequent, apparently unrelated story from the narrator’s life, acts as a way of telling by omission, a strange symbol of the absence of openness in a relationship.

Similarly, Carver’s “Distance” begins with someone else demanding a story from the narrator. Carver’s protagonist lives in Italy, and his daughter is visiting for Christmas. She “wants to know what it was like when she was a kid…Tell me, she says. Tell me what it was like then.” The narrator is reluctant; he says it was long ago, he’s unsure what she wants to hear. What follows is the main story, narrated almost like a fairytale, with the characters largely unnamed. It’s the story of the protagonist when he was a young man living far away—in love, newly married—and his baby, who is the protagonist’s daughter in the frame story. Because the girl has begged for the story, it’s positioned as in some way mythic. But it’s a fairly quiet story about a quickly-resolved domestic disagreement. The young husband wants to go hunting on a snowy morning, but the baby is sick and his young wife doesn’t want him to go. The wife tells him he has to choose between going hunting or his family. “If you want a family you’re going to have to choose.” The husband chooses to go—but almost immediately comes back. When he comes back, the couple make up: they eat waffles, he spills syrup on himself, they laugh together.

Throughout the story, the reader expects something irrevocable to happen, but nothing does. It’s a snapshot of a marriage, of family life. After the story, in the second half of the frame, the daughter voices the reader’s unfulfilled expectations. “But what happened? she says. I mean later.” Her father responds: “Things change, he says. I don’t know how they do. But they do without your realizing it or wanting them to.” As in July’s story, the unraveling of the marriage happens offstage, is implied rather than narrated. By not explicitly showing the end of the relationship, Carver allows the marriage to retain its complexity, mystery, and dignity—one of the pleasures of the story is leaving it up to the reader to wonder about what may have happened.

Both of these stories end on a wistful note. In “Distance,” the father and daughter are getting ready to go outside, but he “stays by the window, remembering that life. They had laughed. They had leaned on each other and laughed until the tears had come, while everything else—the cold and where he’d go in it—was outside, for a while anyway.” In “The Swim Team,” the second half of the frame ends with the narrator running into her ex with another woman. The narrator muses: “You seem incredibly faraway to me, like someone on the other side of a lake. A dot so small that it isn’t male or female or young or old; it is just smiling.” She finishes by talking about her swimming students: “They are dead, of this I can be sure. What a tremendously sad feeling.” Carver and July’s frames allow them to write obliquely about the passage of time.

Though both stories are ostensibly about relationships, they’re really about the act of looking back and the pain and pleasure of remembering. This is the power of a frame story: to remind us that the essential nature of any story is to capture the bittersweet fact of time passing.