Home
»
Critical Essays
»
Silence and Memory in Everything Is Illuminated 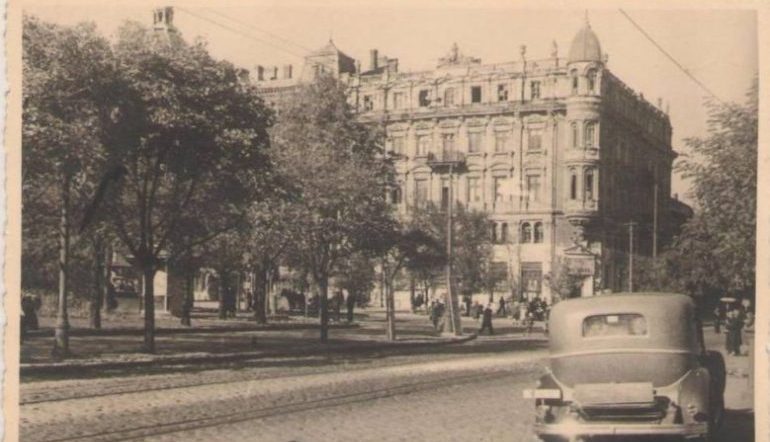 Early in Jonathan Safran Foer’s 2002 novel, Everything Is Illuminated, the reader is introduced to a figure in a photograph that the protagonist, also named Jonathan Safran Foer, calls “Augustine,” though he does not know her real name. Jonathan’s grandmother told him that Augustine and her family saved his grandfather from the Nazis; Jonathan then travels to Odessa to locate Augustine in order to learn about his family’s experience during the Holocaust, a history his grandmother refuses to speak about. The novel moves forward and backward in time, alternating between Jonathan’s travels through Ukraine and the text of the novel he is writing based on his family’s experience—and Augustine’s photograph is situated where the two stories meet. The photograph—silent, unchanging, and unknowable—serves as the emotional center of the story. By revolving the story around Augustine’s silent photograph, Foer draws on the elegiac nature inherent in photography—Augustine’s photograph is a reminder of a moment that can never be recaptured—while examining the limitations of representation.

The moment we actually “see” Augustine is one of unusual simplicity and clarity. It is Alex, Jonathan’s Ukrainian translator, who describes the photograph during his retelling of their journey through Ukraine. The straightforward description feels like a pause in the novel, a moment where the story is opening up; all that is required of the reader is that they look:

She was standing down and right to his grandfather in the picture. A man who I am certain was her father was next to her, and a woman who I am certain was her mother was behind her. Her parents appeared very Russian, but she did not. She appeared American. She was a youthful girl, perhaps fifteen. But it is possible she had more age. She could have been so old as the hero and me…Her hair was brown, and rested only on her shoulders. Her eyes appeared sad, and full of intelligence.

Despite Alex’s effort to show the reader the photograph, he quickly moves from straightforward description to personal interpretation. Because Jonathan is American, Alex reads Augustine as being American as well, though he recognizes that she is Ukrainian, like himself. She is sad, intelligent, a teenager or a young adult. Alex’s description momentarily makes Augustine a contemporary, with the past and the present overlapping in such a viable way that she becomes real. But Augustine exists only in that one photograph. She is no longer fifteen. She might not even be alive. And Augustine might not even be her name. Rather than actual knowledge, what the photograph offers Alex and Jonathan instead is a glimpse into their own desires. The photograph offers them possibility—of giving voice to the silenced, of friendship, of love— and it is this possibility that drives the story.

One of the ways in which the silence of the photograph is productive is how it opens up a space for Jonathan and Alex to begin a friendship. Though one man is the grandson of a survivor and the other the grandson of a perpetrator, they connect and communicate through their emotional response to the photograph and their mutual search for the real Augustine. Situated as they are on different sides of the Holocaust, Alex and Jonathan complement one another: Alex is able to give voice to questions Jonathan leaves unasked, while Jonathan reveals to Alex parts of Ukrainian history that he would not normally encounter. Augustine’s photograph reveals to both men that they have been living with the silence of the Holocaust.

The photograph is Alex’s first encounter with an image of remembrance, as there are no physical reminders of a Jewish presence in Ukraine. When Jonathan tells Alex it is unlikely a Ukrainian would have aided his grandmother’s family, saying, “‘The Ukrainians back then were terrible to the Jews. They were almost as bad as the Nazis,’” Alex expresses disbelief: “‘This is not true.’ ‘It is.’ ‘I cannot believe what you are saying.’ ‘Look it up in the history books.’ ‘It does not say this in the history books’… ‘Say that you are mistaken.’ ‘I can’t.’ ‘You must.’” Though Jonathan assures Alex that his family’s history has nothing to do with him because it is fifty years in the past, the silence of Augustine’s photograph ensure that her story, the story of Jonathan’s family in Ukraine, will remain in the present, because the story will remain unknowable and therefore unresolvable. For Jonathan, Augustine represents a window into the real and imagined past; for Alex, Augustine represents the possibility of redemption for the past he has inherited.

Eventually, Jonathan, Alex, and Alex’s grandfather find Trachimbrod, Jonathan’s grandfather’s village, where they encounter a woman, Lista, who is the sole survivor and living repository of Trachimbrod’s history. Though she recognizes both Augustine and Jonathan’s grandfather in the photograph, it is not the victory Jonathan or Alex had been hoping for. Lista’s stories of Trachimbrod force Jonathan to confront Augustine’s photograph in a way he is not prepared to do. Whereas once Augustine’s photograph represented heroism, survival, and love, after listening to Lista’s stories, the photograph comes to represent violence and loss. As Alex writes in a letter to Jonathan in the aftermath of their journey, “It was a situation without winning. The possibilities were none, between what was possible and what we wanted.” Without the idea of Augustine—that is the idea that the past can be overcome, if not forgotten, and new relationships can develop—a personal disintegration occurs; Jonathan chooses not to continue his friendship with Alex; Alex’s grandfather, having confessed how his treatment of his Jewish friend Herschel led to Herschel’s death, dies by suicide; and Alex, who had once considered emigrating to America, decides to stay and becomes the head of his family after kicking his abusive father out of his home. For better or worse, Augustine’s photograph is an elegy that cannot be had or cannot overcome.

The Augustine of Jonathan, Alex, and Alex’s grandfather exists in the past, present, and future. She is American, she is Ukrainian, and she is Jewish. She is a reminder of the Holocaust and offers release and redemption from its memory. But this “Augustine” is an impossibility, and despite producing many questions, at the end of the journey the characters are still left with a silent photograph of a past that Jonathan has inherited and cannot or will not overcome. In ending his relationship with Alex, he chooses the idea of Augustine rather than the reality she represents. Augustine’s photograph contains too many possibilities, too many perspectives and stories. Alex expresses the disappointment they all feel in his final letter to Jonathan when he writes, “I do not believe in Augustine. No, that is not what I mean. I do not believe in the Augustine that Grandfather was searching for. The woman in the photograph is alive. I am sure she is. But I am also sure that she is not Herschel, as Grandfather wanted her to be, and she is not my grandmother, as he wanted her to be, and she is not Father.” It is Alex, located between his grandfather’s Holocaust past and the friendship he and Jonathan can never develop, who is left to voice the truth: that the Augustine they loved is not real and that the real Augustine, with all of her history, can only produce more unhappiness rather than hope. Augustine is better and more redemptive as a photographic idea.