Home
»
Reading
»
How to Write Violence 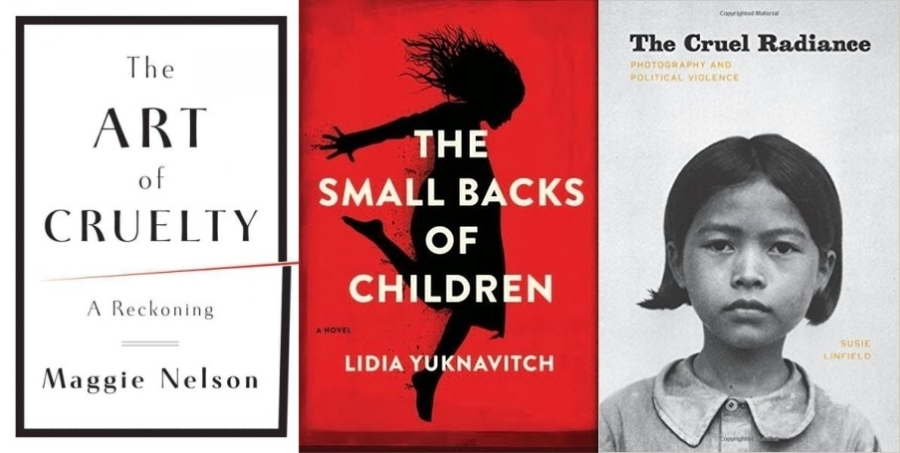 How to talk about violence in literature, when the term violence is so broad? “Violence” is defined as “behavior involving physical force intended to hurt, damage, or kill someone or something,” but it’s also used to depict the “strength of emotion or an unpleasant or destructive natural force.” How to talk—or write—about violence at all, both despite and because we seem so inundated by it?

This is essentially where Lidia Yuknavitch’s essay “Suffer the Children” opens—with a question, fielded from a friend in response to her new book, The Small Backs of Children: “Why bring violence and sexuality so close to the body of a child?” At the heart of the question lies another, shorter question: why bring violence? Longer: why, in a world so teeming with stories of shootings, stabbings, massacres, genocides, do we devote more pages to violence? Is it necessary, and does it incite empathy or produce the opposite effect, introducing empathy’s cousin, apathy? Or, “is there any space left for not watching, not focusing, not keeping abreast of all the events and atrocities unfolding in the world, as an ethically viable option?” (Maggie Nelson)

Maybe the question is not why, but how? How, in a world so teeming with stories and narratives of violence, do we write violence? If writers are to participate as creators or re-creators of violence in literature, or to respond to it, how might we write it in a way that’s not exploitative, aggrandizing, or gratuitous? And how do we participate as readers, as spectators, of violence?

There may not be room to answer all of that here, with all of its complexities and nuances. Maggie Nelson devotes an entire book to cruelty—not violence, but a broader term: one that includes any behavior that causes pain or suffering, physical or mental harm, or, according to the dictionary, “callous indifference to or pleasure in causing pain and suffering.”

“Whether bloodshed need always signify violence is also something of an open question, as if the definition of violence itself: think, for example, of the varying uses of the word at issue in phenomena such as ‘symbolic violence,’ ‘divine violence,’ ‘domestic violence,’ ‘the violence of capital,’ ‘abortion as violence,’ ‘violent language,’ and so on. Another open question: whether an act of so-called violence must always be characterized or accompanied by cruelty: the killing of animals for food, some instances of suicide, assisted suicide, or mercy killing, ritualized body mortifications, and so on, all offer ready sites for debate.” (Nelson)

It seems important to dwell on the kinds of violence, the definitions of it, as if to do so would mitigate the risk of unintentional cruelty, in the form of objective violence. So maybe the question is not why, or how, but what—what is violence in literature? What is its purpose? “Why bring violence and sexuality so close to the body of a child?”

While Nelson devotes a fair amount of The Art of Cruelty to the mediums of stage and screen, visual and performance art, she notes a handful of examples in literature. For one, Toni Morrison’s Beloved, which Nelson offers up as an example of the relationship between “subjective violence (ie. the readily apparent eruptions of violence in everyday life, with discernible agents and victims)” and “objective violence (ie. the systemic or symbolic violence, often as invisible as dark matter, that underlies and mobilizes the structure of capitalism itself.)”

Claudia Rankine’s Citizen: An American Lyric is rife with objective violence, or micro-aggressions, which are systemic and often invisible to those who are afforded the privilege to ignore it. Nelson notes that the scholar who coined the terms, Zizek:

We are paralyzed, bewitched, riveted by the subjective violence, the violent violence—the blood and the wounds and the unspeakable and the unthinkable. While it’s true that writers have agency, the choice to “bring violence” upon a body, it’s not the whole truth—which is to say violence is brought upon bodies each day, and when we read about it without the backdrop of the objective violence, the perspective, the context, it reads as “inexplicable,” “more horrifying.”

Susie Linfield asks in The Cruel Radiance how photography should respond to political violence, writing that “Photographs reveal how the human body is ‘the original site of reality,’ in Elaine Scarry’s words. ‘What is remembered in the body is well remembered.’ The body is our primary truth, our inescapable fate.”

“Why bring violence and sexuality so close to the body of a child?” It’s not a question one wants to answer, which may account for its repetition thus far, and the avoidance of a concise answer—as in the case of Yuknavitch’s essay. There is no reason or justification for violence, and no easy way to rationalize its usage in literature. Not even to reach a deeper truth, an understanding, or a higher plane of empathy justifies the bringing of violence to or on or in a body. Nelson writes, “this model of shaming-us-into-action-by-unmasking-the-truth-of-our-actions cannot hold a candle to our capacity to assimilate horrific images, and to justify or shrug off horrific behavior.”

And yet. Literature is a conversation, one that invites and allows for context and perspective—where photography often fails.

Traveling in Sri Lanka, Leslie Jamison witnesses remnants of the nation’s civil war, bombed-out buildings, to which her driver explains once housed rebels. He adds, “One hundred percent OK.” Frustrated with her own ignorance and lack of context regarding the war, she adds,“We seek narratives to make it so. Violence becomes a necessity, or gets turned into a resort, a soothing holiday.”

How can “behavior involving physical force intended to hurt, damage, or kill someone or something also” be “a necessity,” “a resort, a soothing holiday”? With literature, we can explore that complexity and nuance in a way we can’t with images flashing on a screen. Not in an attempt to “justify” or “shrug off horrific behavior,” to incite empathy or apathy, but to pose the questions and sit with their residual ringing, their resonance.

My own thoughts upon finishing The Small Backs of Children mirrored Nelson’s response to an art project she witnessed: “this says something. What on earth it says, I have no idea. I like it, though, because it bothers me, and I’m not sure why. […] Whatever it is, I agree that it places us in the ‘lived moment of contraries where we all have to deal.’ I’m not sure where this is, but I’m glad to be here.”