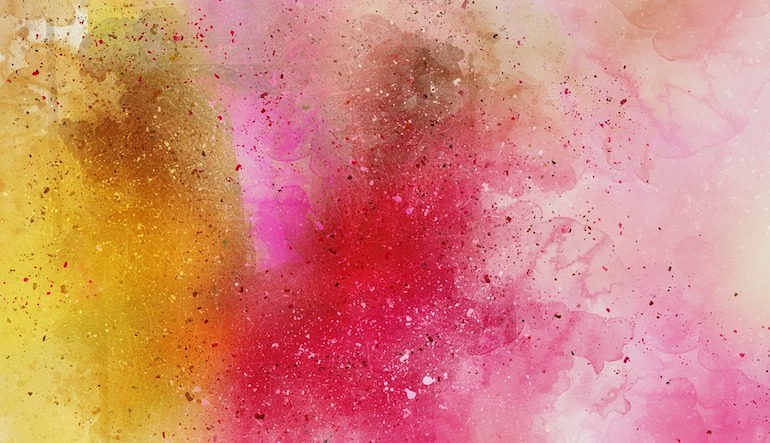 Like abstract visual art, experimental literary work sometimes gets a bad reputation for mystifying its audience; it can make us feel like we haven’t achieved a certain level of highbrow intellectualism or haven’t read enough theory. And it isn’t easy to dwell inside of a book-length text without a clear narrative structure or expositional framework. Color—in this case, a single chosen color to thread throughout the book—can be a way of anchoring the radically non-categorical somewhere in the realm of the familiar.

This year is the twentieth anniversary of Anne Carson’s “novel in verse,” Autobiography of Red, where color is much more than a recurring visual symbol. The main character, Geryon, is identified with red, but redness also becomes embedded in questions of perception and reality: red can represent the unseen interiors of bodies (blood) and of the earth itself (lava). Consider these lines from the section “XXXI. Tango”:

Somewhere (he thought) beneath this strip of sleeping pavement
the enormous solid globe is spinning on its way—pistons thumping, lava pouring from shelf to shelf,
evidence and time lignifying into their traces. At what point does one say of a man that he has become unreal?

Here, red imagery offers both groundedness and un-groundedness, where the inescapable physicality of the planet becomes caught up with an instability of the self. The “pistons thumping, lava pouring from shelf to shelf” invokes a hidden world of red movement and turmoil even beneath that which seems still: a “strip of sleeping pavement” or a frightened young boy who is also the winged monster Geryon.

Marie NDiaye’s Self-Portrait in Green (translated from the French by Jordan Stump in 2014) and Maggie Nelson’s Bluets (2009) present two more recent examples of hybrid-genre works that employ color as a unifying device. In her own way, each writer is exploring ways of looking at the world through a “lens”—something that can allow new meanings to emerge.

In the fictionalized memoir Self-Portrait in Green, NDiaye writes of a paranoid dreamscape life in which she observes various “women in green” entering her story and nearly making it their own: “I fear I’ll see myself as a senseless fool should all those women in green disappear one by one, leaving me powerless to prove their existence, my own originality.” She repeatedly questions her own perceptions of reality during these interactions, even as they occur. In one passage, she writes:

[I]n spite of this woman in green’s face so close I could hold out my fingers and touch it, something intangible, a veil, a glimmer of unreality makes me reluctant to tell her who I am. I don’t entirely believe in what she is. Not that I think for a moment she’s pretending—for one thing, the name she gave me as hers is the very one I’d been told—but I sense that she’s taken on the attributes of some other person, and doesn’t realize it herself.

Her interactions with these “women in green” throughout the book are constant acts of reevaluation, asking: How am I different from this person, and how are we the same? And how can we claim to be close to each other? NDiaye paints the women in the story (including her own first-person voice) as porous entities that take in material and, like the flooding river Garonne with which she bookends her narrative, overflow into new spaces.

Maggie Nelson is also concerned with troubling concepts of the self in a hybrid-genre framework. The interwoven meditations on light and color, depression, and blue objects come together in a way that is often more about interrogating the nature of feelings. In one passage, she writes:

88. Like many self-help books, The Deepest Blue is full of horrifyingly simplistic language and some admittedly good advice. Somehow the women in the book all learn to see: That’s my depression talking. It’s not “me.”

89. As if we could scrape the color off the iris and still see.

In Bluets, blueness is so much more than a general metaphor for depression. Early on, Nelson asks us to remember that even objects have a complex relationship with the qualities we perceive as “color”: “Think of an object’s capacity to emit, reflect, absorb, transmit, or scatter light; think of ‘the operation of light on a feather.’ Ask yourself, what is the color of a puddle?” Similarly, in the passage above, we are asked to contemplate the seemingly unstable relationship between a feeling and the self who feels it. The rare rhyme that bridges these two short sections—“me” and “see”—gestures toward more formal categories of poetry; perhaps the simplicity of the pronouncement “that’s my depression talking” is just as forced as the boundaries between genres.

The final proposition in Bluets reads: “240. All right then, let me try to rephrase. When I was alive, I aimed to be a student not of longing but of light.” Light resists physical categorization in that it is neither a wave nor particle, and that is part of what makes color such an interesting device for narratives that defy genre. In this NYT Magazine profile of Anne Carson, she was asked by Sam Anderson to elaborate upon her emotional relationship (or lack thereof) to her work. She wrote in an email to him: “a particle is a thing in itself. a wave is a disturbance in something else. waves themselves are probably not disturbed.”

It’s a cryptic response. What makes something a “thing in itself” versus a “disturbance”? Is an emotion a “thing” or a disturbance within a self? These three experimental works—Autobiography of Red, Self-Portrait in Green, and Bluets—use different colors in different ways. What they seem to share is this notion of disturbance: they destabilize categories like genre and color as a way of moving forward with exploring the disturbances found within personhood.