Home
»
Critical Essays
»
“Is this the truth of our historic encounter?”: Museums in Literature 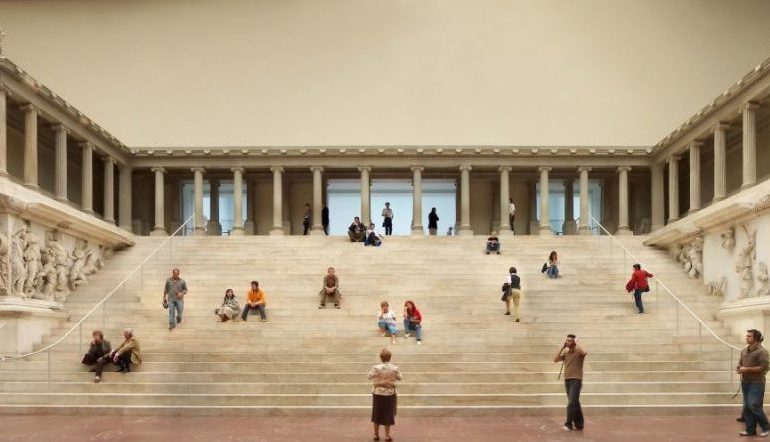 In Colson Whitehead’s The Underground Railroad, the protagonist, Cora, escapes the plantation where she was born and makes her way to South Carolina, where she lives under an alias and ends up working in a museum, as part of three displays: “Scenes from Darkest Africa,” “Life on the Slave Ship,” and “Typical Day on the Plantation.” She and two other women take turns “playing” a character in each display: a woman in a hut, an “African boy” wearing leather boots and helping with various tasks on deck, a slave sitting at a spinning wheel. Cora intuitively calls into question the veracity of the displays, not just the ones she has to act in, but also the “white exhibits.” If the rationale behind the museum is to educate the public as to American history, and to let people “see the rest of the country beyond their small experience,” it nonetheless occults the fundamental truth of the origins of the country: the violence of white settlers, Native genocide, chattel slavery.

In parallel, Cora has discovered the white doctors of the town are trying to take eugenics to the next level by infecting black men with syphilis without the knowledge of the latter and by sterilizing black women. Whiteness, Cora realizes, steals the past, present, and future of black people. Even the little freedom she has now is far from stable, and does not protect her from continuous objectification: behind the display glass pane in the museum, she is little more than a silent cipher in the white supremacist imagination. The displays reiterate a coercive and normative vision of the nation and the people who inhabit it; they also perpetuate symbolic violence upon the bodies of those oppressed in the construction of the country.

Not all representations of museums overtly highlight the way they structurally rely on certain power dynamics, and yet the adherence to a certain normalizing discourse is always there, lurking, even when the explicit intention of the museum is to reconnect with a lost past. Take the Museum of Civilization in Emily St. John Mandel’s post-apocalyptic novel Station Eleven. The story is set in a future where most of humanity, and the technological advances that went with it, has been wiped out by a strand of flu. No more electricity, no more computers, no more air or rail or car travel. In what used to be an airport, people have eventually gathered to rebuild a new form of community. From random items left by people who’ve come and gone—a credit card, identity documents, a motorcycle engine, stiletto shoes—a museum springs up. It’s a testament to a lost world, and the myriad of now-defunct objects that used to power it.

But why the name? “Civilization” is a loaded word, even in a world where it has supposedly been rendered meaningless by the disappearance of borders and fuel. What is the kind of civilization that is being commemorated here? More broadly, this museum as one of the focal points of the novel acts as a beacon, a destination for travelers, but this oasis is also the last stand-in for everything that’s been lost, and nostalgia can easily slip into an idealization of the past. The question is then: what vision of the pre-collapse past does this museum bring, and how does it contribute to the creation of communities in the post-apocalypse world?

Beyond their aspiration to any kind of educational enterprise, museums in the Western world often are a site of violence, and the ways in which they have been complicit in the reproduction of gendered, racial, and colonial violence (among other forms). So what does representing them in literature bring to the discussion? Does another layer—the text, the words containing the space of the museum—add anything to our understanding of this violence? After all, in the aftermath of the Holocaust, Adorno’s oft-quoted statement that writing a poem is barbaric has often been taken to mean that no text can stand up to the sheer horror. If what is contained within those museums is itself barbaric—putting on full display the result of plunder—wouldn’t any text representing them perpetuate the barbarity?

Saidiya Hartman notably tackles this issue in “Venus in Two Acts,” where she delves into the representation of Venuses—enslaved black women—in the archives of Atlantic slavery. Given the often indicible levels of violence these women have been subjected to, what are the ethics to take into consideration? In a searing series of questions, Hartman sets down the terms of the discussion:

How can narrative embody life in words and at the same time respect what we cannot know? […] Or is narration its own gift and its own end, that is, all that is realizable when overcoming the past and redeeming the dead are not? And what do stories afford anyway? A way of living in the world in the aftermath of catastrophe and devastation? A home in the world for the mutilated and violated self? For whom—for us or for them?

There’s no solution. It is, quite literally, an impossible aporia brought about by the indicible horror and trauma of the past. And yet, while narration is not perfect, it does open a speculative space where restorative justice might be not entirely out of reach.

In her poetry collection, Voyage of the Sable Venus, Robin Coste Lewis takes a scalpel to all kinds of texts from Western museums. Through her experimental poetic confrontation with the texts museums have produced around the bodies of black women, Lewis reimagines how black women might inhabit, experience, and be represented in a world that doesn’t negate them. She finds the “space of the interval,” as Hartman puts it, that holds in productive tension the need to remember and recount the horrors of the past, and the inevitable failure to avoid the accompanying violence or to properly represent the negated figures of history.

Museums are evidently both a site of oppressive struggle and possible emancipation—the latest news about the largest LGBT museum being slated for development in the UK is a testament to how such spaces can be used to confront historical trauma and to move forward, toward a horizon of reparation. If there’s anything we can glean from the ways museums are depicted in books, it’s that literature opens up the experimental space where we can think about new ways to engage with history and to escape normative discourses about memory.