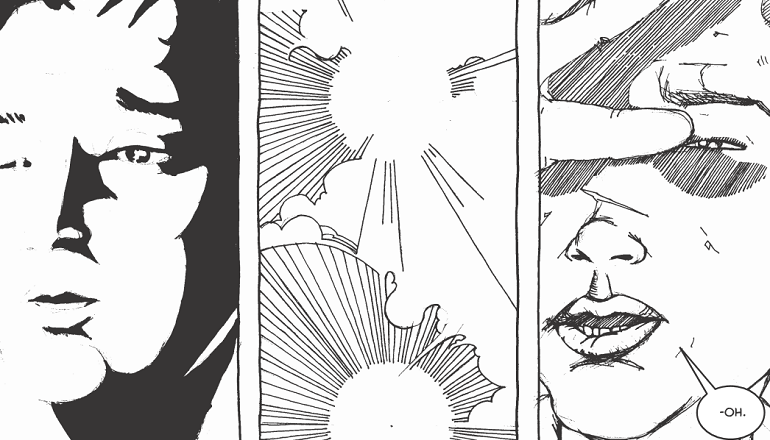 Four hundred and seventy-five years separate Mehret and Kameen, two kids scavenging trash in a desert wasteland, with Ted Taplin, a whistleblower trying desperately to get out of New York City with his life. Yet another 465 stretches back between Taplin and an unnamed street artist gluing posters to walls in a half-sunken city just in the periphery of a police state.

The stories in the recent serialized graphic novel, The Solar Grid, operate not in moments but centuries—tracking the individual struggles of people on an earth living in the shadow of an ecological disaster known as the Flood. But this isn’t Mad Max. For however dire it is to watch two children work around land mines, The Solar Grid is about what a society does after moments of crisis.

Major cities still exist in the Solar Grid, corporations still exist, and rather than an egalitarian desolation we’re accustomed to in post-apocalyptic fiction, the artist and writer Ganzeer shows a far more likely scenario: in the face of ecological and societal collapse, technology and money come together to save some and doom others.

In this way, the arc of time of the comic is a conversation in cause-and-effect both in corporate and western interventionism. Nine years after the flood, in a Cairo where people travel by boats, the Solar Grid—the titular series of artificial suns meant to provide an hour or two of extra daylight to reduce the flood levels—is a reactionary measure and one scared people rest all their hope on. By 474 A.F., it’s a reality, some cities are above water but already corporations are siphoning water from Earth to interplanetary colonies. By 945 A.F. whoever’s left is an afterthought.

The artist/writer Ganzeer talked in an interview with the Guardian about his experience of seeing the Aswan High Dam as a child. On seeing this monument to man’s ingenuity consecrated in concrete and steel, he was awed.

His home country of Egypt is caught in a water crisis. The natural flooding seasons that kept the droughts in check for thousands of years are gone. Cause meets effect.

While history frames the context of Mahret and Kameen, Taplin, the unnamed artist, and the CEO Sharif Algebri, their stories are as participants in their environment. None of these are characters taking down their dystopic overlords. This isn’t Divergent or The Hunger Games but instead the characters of The Solar Grid have their narratives based around their places, and it’s a conflict embedded all around them. It’s how you navigate your environment, how you push back where you can, but maybe more importantly just how you survive.

Again, however, The Solar Grid is a comic book, and how we experience this conflict is embedded into the very sense of how we read it. For every person I’ve met who loved comics, there was another who couldn’t get through them. They didn’t understand how to follow the logic of the panels, which dialog bubbles to read first, or the layering of visuals. Being able to do this, however, is as important to comics as understanding punctuation and sentence structure is to reading.

Eight or nine panels on a page will slow you down. You have to purse every small detail or movement in a panel, but those panels remain small enough that you’re still carried swiftly through a sequence. A flurry of dialog bubbles grounds you, forces you to read out back-and-forth conversation like reading a play. But a page covered in four panels, these open-spaced shots, you fly through. Like the difference of naturalistically reading a sentence like this. To reading this one.

Reading Mahret and Kameen, those two orphan scavengers in 945 A.F., you can see their problems surround them. Their panel backgrounds are desolate and often dominated by white space. They have page-wide panels, even a whole page panel, and when the page slows it’s always on their movements—you see them stare each other down, grasp for makeshift weapons as two children nearly kill each other over name-calling. But it’s just them. They’re in a wasteland. The post-post-apocalypse where corporations that promised to fix the Earth have long since abandoned it. Their environment is empty, hot, and it surrounds them, ready to snuff them out if they’re not careful.

And when the Solar Grid comes out, the encroaching army of artificial suns that beat down on their home, the line work shifts. There are no shadows, no textures. Their background is just a plain white, the characters are nothing but line work on the page to parallel the consuming and visual intensity of these devices. Their environment is bare and toxic and in fiction, they strap on protective suits just to make it back to their homes.

In 9 A.F., just after the colossal flood, the city of Cairo, Egypt, is drawn in ink smudges that spread like watercolors. The lines that construct the half-underwater buildings are heavy with ink and the walls that back the characters are pencil gray, all to convey this sense of weight. This sense of a place and people soaked with water and molding. When a group of thugs wants to rough up the street artist for her political leanings, you know this is a place already heavy in decay.

It’s the specific, tangible details in fiction that help us understand a story’s emotional context. When Tim O’Brien lists out the supplies the soldiers in Vietnam carried in his short story “The Things They Carried,” those paragraphs are dense. They’re a massive list of canned goods, rations, packets of Kool-Aid, dental floss, and so on, and it’s the monotonous back and forth that lets us know both the impassioned feelings of the people going into combat and their careful, deliberate expendability.

For The Solar Grid, how we experience the conflict, the details that surround the characters, get to be how we read them. When a whistleblower in future New York races through his city, it’s populated by people, conversation, and brands. In such a technologically enriched place, there’s information overload. Security camera logos. Shop windows. Screens on screens on screens, and we parse through this like we navigate around pop-up ads. So when the whistleblower lets out a story of corporate corruption we already know the end result: the new information will get diluted in a place already oversaturated with it.

This is the ability of comic book storytelling—this way of making the themes and world of the story the presentation. The simply drawn squares are not just windows or structured prison cells for drawn narratives—they are the narrative. They’re the sentence for the drawn words they carry.