Home
»
Critical Essays
»
Levity and Storytelling in A Christmas Carol 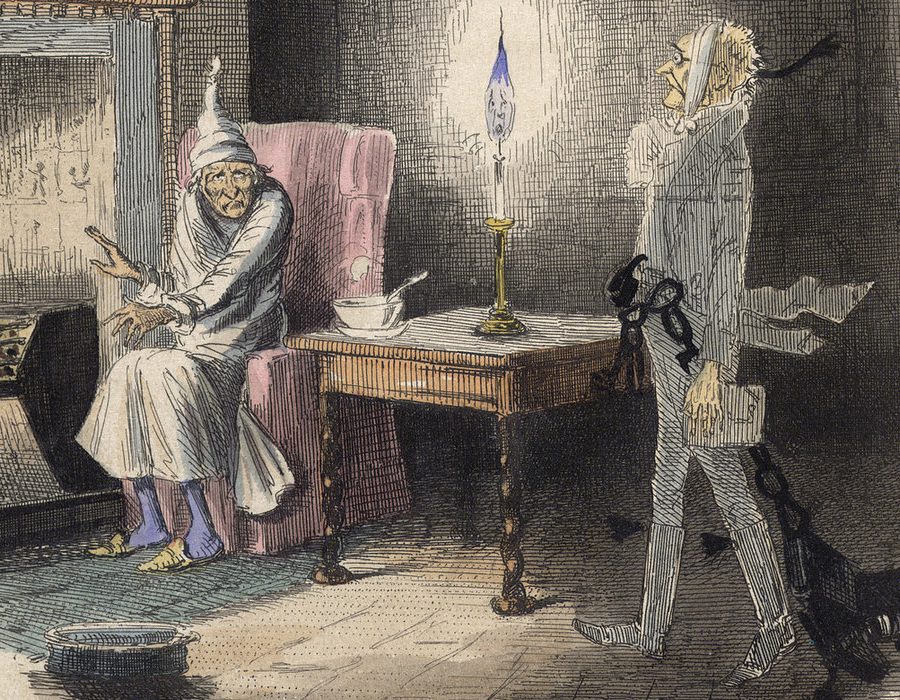 Plenty of people who haven’t ever opened a copy of Charles Dickens’ A Christmas Carol could summarize the entire plot. Even lacking that, they may be able to provide a few references (“Bah humbug!”) or some memorable images (the decidedly creepy Ghost of Christmas Yet to Come; the chains of Marley’s ghost). Scrooge’s tale has emerged in the English-speaking world as a near-secular and near-ubiquitous cultural touchstone.

Especially thanks to its numerous adaptations in theater and film over the years, the title has become so familiar that it’s easy to forget how strange it is, how it necessarily conjures a fluid boundary between story and song. With the indefinite article “a,” Dickens seems to declare that the story is not about a carol, but instead is itself a Christmas carol: a song for the season.

The full title, usually abbreviated in adaptations and references, reads: A Christmas Carol. In Prose. Being a Ghost Story of Christmas—the specification of “in prose” emphasizes this playful genre-work hiding in plain sight. Dickens’ textual structure operates along the same lines. Instead of chapters, the 1843 novella has five sections called “staves”—that is, the five-lined base for Western music notation (the stave is called the “staff” in American English). These structural elements set the tone for something much more interesting than the typical didactic allegory. If you know where to look, there lies at its core a distinct lightness and musicality that might run contrary to the way Dickens (and Victorian literature more generally) appears in today’s popular imagination.

That is not to say that the popular imagination is entirely groundless. A surface-level overview of the actual events in A Christmas Carol makes it sound somewhat gloomy and overly moralistic: a greedy and unpleasant man who hates Christmas is visited by ghosts who show him the error of his ways, partly by threatening the consequences of his actions and partly by illustrating to him the value of human fellowship. After the hauntings, he then turns his life around, learns to be generous and kind, and reverses his Grinch-like attitude toward Christmas.

Dickens’ original preface reflects an acute awareness of how he is attempting to blend moral gravity with stylistic levity:

I have endeavoured, in this Ghostly little book, to raise the Ghost of an Idea, which shall not put my readers out of humour with themselves, with each other, with the season, or with me. May it haunt their houses pleasantly, and no one wish to lay it!

What does it mean for a story to haunt its readers “pleasantly”? When the ghost of Scrooge’s dead business partner arrives, initiating the series of literal “hauntings,” his message is anything but pleasant. Marley shows Scrooge the reality of the spiritual “chains,” which he forged during his lifetime through selfish deeds and which weigh him down in the afterlife.

The emphasis on the immense weight of Marley’s chains, coupled with the way he gives Scrooge a glimpse into the “Invisible World” of suffering spirits who wander the earth, makes this scene perhaps even more threatening than the later visit of the mysterious Ghost of Christmas Yet to Come. But Dickens finds ways to undercut the gloom. Consider his comedic elaboration upon the famous opening statement that “Marley was dead to begin with”:

Old Marley was dead as a door-nail. Mind! I don’t mean to say that I know, of my own knowledge, what there is particularly dead about a door-nail. I might have been inclined, myself, to regard a coffin-nail as the deadest piece of Ironmongery in the trade. But the wisdom of our ancestors is in the simile and my unhallowed hands shall not disturb it, or the country’s done for.

A sense of lightness thus endures at the heart of Dickens’ narrative. Even in discussing death, Dickens cracks a joke about people’s attachment to familiar figures of speech. To attribute such a quotidian saying as “dead as a doornail” to the “wisdom of the ancestors” also reminds us that all language is also a form of time travel, a form of resurrecting the dead through re-using the words that they once uttered.

The inherent musicality and levity of A Christmas Carol can be difficult to replicate on stage or screen without Dickens’ ongoing narrative quips. In the 1992 film adaptation The Muppet Christmas Carol—which features Michael Caine as Scrooge and Kermit the Frog as Bob Cratchit—the writers chose to include a narrator who plays “Charles Dickens” himself. As Dickens, The Great Gonzo (another Muppet) follows the characters around to spy through windows and comment on the scene. While Michael Caine’s acting and The Great Gonzo’s ongoing good humor are certainly part of what makes the film endure as a near-cult classic among families who love it, it can be argued that the most important aspect aligning the film with Dickens’ original text lies in the inclusion of lighthearted musical numbers. Even the opening song about how much everybody dislikes Scrooge is filled with humor and an upbeat melody.

The Muppets’ manner of haunting us “pleasantly” and bringing the text’s musical core to the forefront allows the film to capture the spirit of Dickens’ narrative levity. The Ghost of Christmas Present’s jovial chorus reminds us: “Wherever you find love, it feels like Christmas.” It seems that Charles Dickens would agree.