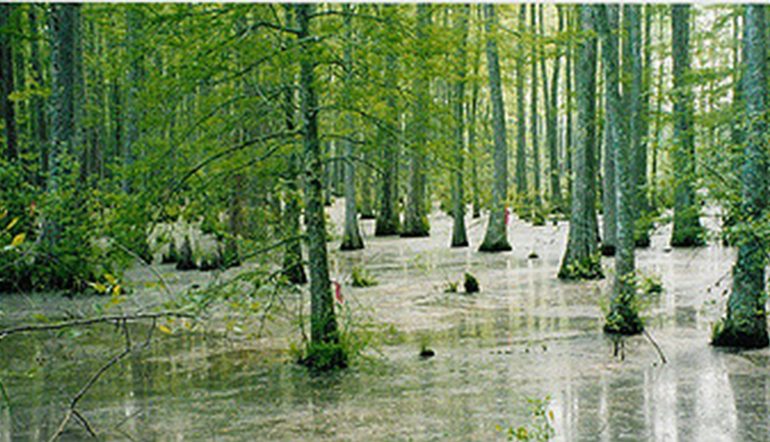 In a 2011 interview with The Paris Review, Jesmyn Ward discussed contending with William Faulkner’s legacy as a Southern writer. “The first time I read As I Lay Dying, I was so awed I wanted to give up,” she told the interviewer. “I thought, ‘He’s done it, perfectly. Why the hell am I trying?’ But the failures of some of his black characters—the lack of imaginative vision regarding them, the way they don’t display the full range of human emotion, how they fail to live fully on the page—work against that awe and goad me to write.”

Much has been made of Ward as a natural heir to Faulkner. Reading Sing, Unburied, Sing, the echoes of As I Lay Dying toll clearly through the multiple perspectives, the family road trip, the tragedy that permeates each interaction and personal realization. And, like Faulkner, Ward sets all her novels in a town loosely based on her own hometown in Mississippi, mapping a terrain that holds the various human experiences within its topographical confines. Faulkner set all but four of his novels in Yoknapatawpha County, inspired by Lafayette County, where he lived in Oxford. Ward sets all her novels in Bois Sauvage, a rural Mississippi coastal town based on DeLisle, where Ward lives now with her family. “Bois Sauvage, with its watchful children and desiccated vistas, is a kind of duskier Yoknapatawpha,” wrote Vinson Cunningham in The New Yorker. Ward’s and Faulkner’s stories can only be set in these fictionalized Mississippi towns, since the characters and plot rely on the setting for their engine.

The terrain and landmarks of Yoknapatawpha County in Faulkner’s fiction create a setting of grief, decay, and death. Although his characters struggle with moral and spiritual goodness, their experiences are confined to the forty-by-sixty-mile rectangle of Yoknapatawpha. Faulkner scholars and fans have painstakingly mapped out where various plot points happen, as well as where the families that recur throughout the various novels lived. In brief, Yoknapatawpha was originally Chickasaw land (the word “Yoknapatawpha” is a compound of two Chickasaw words, Yocona and petopha). Faulkner himself told an audience at University of Virginia—the lecture available now in a wonderfully scratchy old recording—that the two words together mean “water flows slow through flat land.” And just as the landmarks recur throughout Faulkner’s body of work, so do the white families that built plantations around the county: the Greniers to the southeast, the McCaslins in the northeast, the Sutpens in the northwest, and (the main characters of my own favorite Faulkner novel) the Compsons, who settled near Jefferson, the county seat, based loosely on Oxford, Mississippi.

Later, the county became mostly small farms, the ancestors of the white settlers feeble-minded, stuck, criminals. At that same University of Virginia lecture, Faulkner laid out one of his most enduring beliefs about the human heart: that man cannot escape the past, for “he is the sum of his past…. It is a part of every man, every woman, and every moment. All of his and her ancestry, background, is all a part of himself and herself at any moment.” Even Quentin Compson, the Hamlet-like brother from The Sound and the Fury whose moral dilemma leads to his suicide while a student at Harvard, says there may as well be no difference between Massachusetts and Mississippi. One of the only characters afforded an escape, Quentin feels hopelessly out of place in the North and becomes obsessed with the tragedy and doom of his Southern family’s past.

While this setting contains the whole world of Faulkner’s fiction, it does not represent the entire region of the American South. Jesmyn Ward’s fictional town, Bois Sauvage, at the southernmost tip of Mississippi and over three hundred miles south of Yoknapatawpha, could be another world, forgotten and left behind, even more remote and vulnerable than Yoknapatawpha. Both of her National Book Award–winning novels, 2011’s Salvage the Bones and 2017’s Sing, Unburied, Sing, are set there. Both novels also show characters grappling with the past, only Ward’s characters can’t mourn the decaying glory of Faulkner’s South. Instead, these are the descendants of the enslaved people who worked generation after generation for people like the original settlers of Faulkner’s South. Ward’s characters have their tragic past thrust upon them, their choice and freedom stripped by others, their present cast under the long shadow of poverty, desperation, and erasure.

Salvage the Bones tells the story of fifteen-year-old, pregnant Esch and her family on the eve, and in the wake, of Hurricane Katrina. “In Bois, the houses … are ripped and torn in some places … some of them leaning tipsily, like ours, half drowned,” Ward writes near the end. “Here, there is too much sky. Something turns in my chest, spreads, and drops; it leaves nothing.” We see a rare glimpse of the devastation beyond New Orleans and empty coast nearby. “People stand in clusters at what used to be intersections, the street signs vanished, all they own in a plastic bag at their feet, waiting for someone to pick them up. No one is coming,” says Esch.

“Ain’t nothing left,” her brothers’ friend remarks. The devastation of Bois Sauvage has unearthed impossible questions: What comes next, and who is to blame?

Sing, Unburied, Sing is a road trip novel, the protagonist, Jojo, setting off with his mother and sister to Parchman Farm, otherwise known as Mississippi State Penitentiary. It’s clear this is the town post-Katrina, although the hurricane is referred to only once over the course of the novel. Ward said in an NPR interview that Jojo is learning what it means to become a black man in the South. “And he’s confronting basically the history of the South … of racist violence, of slavery, you know, of Jim Crow…. it’s a very personal battle for him because of who his family members are.” He does seem uncannily aware of the sociopolitical implications of his role in Bois Sauvage. “Some of my friends at school have people living up there, in Clarksdale or outside Greenwood,” he narrates as he sits in the backseat of his mother’s car. “What they say: You think it’s bad down here … What they mean: Up there? In the Delta? It’s worse.” Jojo’s mother struggles with drug use, his father in prison. The whole family is helpless to change their history, mired in America’s political, social, and environmental dangers.

According to Faulkner, “To understand the world, you must first understand a place like Mississippi.” Ward’s characters respond to Faulkner’s “lack of imaginative vision” regarding Mississippi black population. “So much of his work was centered in this place that he made up in Mississippi,” she told TIME Magazine, “with this revolving set of characters that popped up in his work again and again. I understand that in some ways I’m attempting to do the same thing, to create this world and render it real and on the page.”

Despite the heavy legacy Ward’s characters carry, they are afforded a reckoning and healing that Faulkner’s characters are not. “They endured,” Faulkner writes as his last line of The Sound and the Fury, of the people who do the work, keep the faith, and reconcile their present with their past. The same could be said of the land they call home—and of the stories they tell to be remembered.