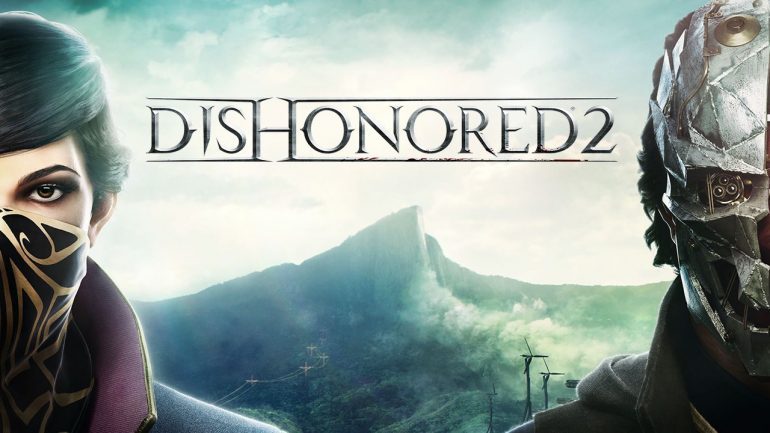 Much like its predecessor, Dishonored 2 is a steampunk revenge story painted in vintage graphic design tones that combines genre conventions of sci-fi, supernatural fantasy, historical fiction, and action RPG into a stunning nine-chapter video game novella that is as gory and interactive as it is inventive and derivative. Few things push plot lines as well as vengeance in drama and leveling up in RPGs, which is why Dishonored 2, despite its many flaws, integrates plot, adventure, and history effortlessly into a unified field, centering its narrative on the propulsive quest of assassination and personal redemption. Much like Victorian morality in the nineteenth century, this game is a Manichean fantasy world of good and evil. Dishonored 2 forces players to instantiate (and then live by) their own moral paradigms. If, for example, players want gameplay that is nonviolent and/or stealth-based, they can use sleep darts and render royal guards and witches unconscious. And if they’re seeking blood sport, players can shoot anything that moves with crossbows, grenades, and old-school hand muskets. Each paradigm and its respective gameplay confers different achievements at the end, but players decide which moral universe they inhabit and ultimately, which moral universe they create at the game’s conclusion. The moral operating system in Dishonored 2 is fascinating, but fatally simplistic, too, for the way in which it simplifies and glosses over moral complexities.

Dishonored 2 is, above all else, a digital ode to the ruling class. One of the game’s blind ironies is its blatant but unresolved class conflict. The entire premise of Dishonored 2 as a gruesome revenge tale privileges—instead of interrogates—the power of the monarchy, which is the very class structure that has corrupted Karnaca. After Delilah Copperspoon (who turns out to be the illegitimate and estranged daughter of Emily’s father and whose surname evokes the English working class) organizes a bloody coup against the ruling class of the Empire of the Isles, players assume the role of Emily Kaldwin (the heir apparent) or Corvo Attano (the former royal bodyguard and assassin), slashing and hacking turncoat royal guards, state sanctioned religious fanatics (called overseers), and members of the Howler and Hatter gangs. The central goal here is to vanquish Delilah, defeat her supernatural cabal of aristocrats, quash organized crime, and ultimately restore Emily to the throne. And yet in my materialist reading of Dishonored 2, Delilah’s insurrection is partially a proletarian revolution against the ruling class. Emily’s defeat of Delilah and her subsequent return to power, therefore, is ironically the reestablishment of the social order, which reeks of massive wealth inequality, class privilege, social alienation, and economic anxiety. Players become complicit in helping restore the empire and its barbaric plundering of natural resources, economic determinism, environmental degradation, military aggression, class exploitation, and wealth inequality.

Of course, almost none of the evils of the Empire of the Isles are explicitly mentioned in Dishonored 2 except when it involves the indulgences of the insurrectionists (who are technically elites, but not the “good” ones like Emily and her family). Players will never, of course, learn of the economic exploitation that took place in order for Empress Emily and her family to seize and maintain control of the kingdom, an antiseptic world building that belies the history of bloodshed and class domination that presupposes all empires and all acts of economic and class domination. Instead, players infiltrate a world of unattributed wealth one palace and one conservatory at a time in order to restore Emily to her glory. Further, Dishonored 2 forces players to accept the idea that Emily’s return to power is an obviously good thing (since her role as empress is a necessary, even predestined, condition for maintaining peace in the kingdom). But empire is empire is empire, and players of this video game ironically help Empress Emily regain control of an economic lawnmower that dismembers everyone not pushing it over the weeds. As Corvo rescues Emily (that hackneyed trope) or as Emily rescues Corvo (a better inversion of that hackneyed trope), either way, players are reinforcing the empire’s monopolization of natural resources and human labor while unwittingly protecting and reinforcing the crown’s exploitation of working class people, who are depicted in Dishonored 2 as uneducated oafs, gossips, and pariahs. All the more reason they deserve their own exploitation, the video game seems to say. At best, Dishonored 2 prevents us from feeling sympathy for the proletarian class in part because their subjectivity is never established (a privilege reserved only for the monarchy and its greatest traitors). Instead, in the course of twenty to thirty hours of gameplay, players are incentivized to ransack entire towns, steal from the lower classes, and decapitate disloyal soldiers and corrupt black market entrepreneurs, all in the name of restoring sheen to the crown, a literal punching down that feels as bad as it sounds.

In Dishonored 2, players decide which paradigms to follow for gameplay (nonviolent, ultraviolent, using or eschewing supernatural powers, guns blazing or stealth mode) but they also decide which character typology to embody, a satisfying but largely binary selection process. Unsurprisingly, the players’ choices of characters’ genders gameplay at the same time that it constructs gender roles, often in stereotypical and problematic ways. For example, when playing as Emily Kaldwin, players gain prominent powers like “Domino,” which links enemy combatants together, “Far Reach,” which grabs characters and delivers them to her, “Mesmerize,” which distracts enemies with the void, and “Doppelganger,” which creates a holographic image of herself. While all of these powers are exciting to use during combat, they’re powers based on deception, illusion, and strategy that emphasize female intelligence and guile first and foremost. Corvo’s most prominent powers, on the other hand, are much more gruesome: “Devouring Swarm” (which is a carryover from the original Dishonored) sends a pack of bloodthirsty, plague-ridden rats to devour enemies, “Windblast” slams enemies against the wall, and “Blood Thirst” automatically kills enemies in an adrenaline-filled burst of rage. In addition to numerous upgrades for strength, reflex, agility, and vitality, Corvo’s vicious powers all emphasize his physicality and brute force over his intelligence. Dishonored 2 follows a medieval template of gender performance that is both completely familiar in the gaming world and also fatally backwards in the evolutionary world. Ultimately, it’s simply easier (and more efficient) killing enemies through brute force and aggressive gameplay with Corvo’s upgrades and violent powers than it is with Emily’s illusionist powers, which is a condemning depiction of masculinity and a simplified representation of gender roles in general.

At the same time, almost all of the most powerful characters in Dishonored 2 are in fact women: the nameless female officers have better aim than their male counterparts. The sociopathic Crown Killer turns out to be Alexandria Hypatia, a respected scientist, who develops a split personality after testing a serum designed to help miners afflicted with pneumoconiosis (black lung disease). Breanna Ashworth, the leader of a coven of shape-shifting witches, is a curator at the National Conservatory. And then there’s Delilah herself, who is powerful, cunning, artistically gifted, highly organized, and emotionally resilient. During one cut scene in particular, we learn that Delilah was thrown out of Dunwall Tower after Emily’s mom (Queen Jessamine) had broken an expensive item and then blamed her for it. Afterwards, Delilah was forced to live in debtor’s prison and then on the streets after her mom was killed by a prison guard. It was out in the cold, grimy streets, that Delilah learned to paint, her skill being an artistic metaphor for her subjectivity, class transgression, and historical reimagining. Her reciprocal story of revenge is as much a class revolt as it is a familial one. Dishonored 2, unlike its precursor, makes a compelling argument that women don’t need Victorian love, marriage, male sidekicks, or even gunpowder to rule the world or burn it all down to the ground.