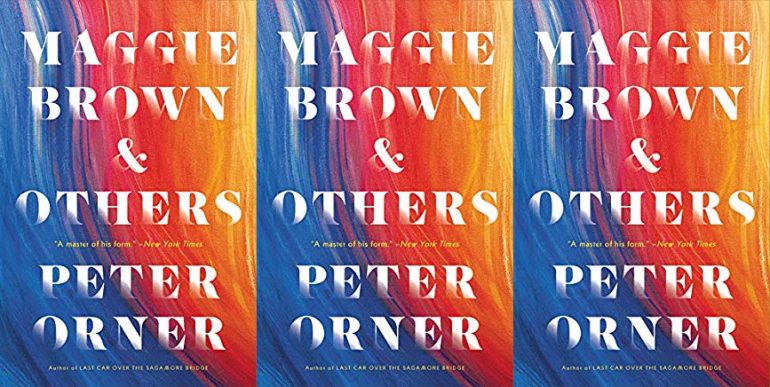 Peter Orner has the unique ability to invent fully-formed, vibrant characters within the shortest of stories. The author’s latest collection, Maggie Brown & Others, is an exuberant body of such carefully crafted characters. The book contains 44 stories, many spanning as few as two or three pages, and a novella that caps off the collection with a vibrant remark: millions of lives exist side by side in a world ridden by mental illness, inequality, and despair. Yet it’s the mundane that feeds the sublime, awarding a commonality that keeps propelling us toward a spirited life force.

“When I’m writing a novel or a story collection, it starts with character,” Orner said in an interview published by Dartmouth, where he’s a creative writing professor. Indeed, in Maggie Brown & Others, we walk into a new character’s life every few pages, sans introduction. That feels natural—we don’t need a true beginning, middle, or end to learn what sustains a character. Their stories—little windows through which we view a snippet of their day—are often plotless, but plot feels unnecessary when we are engrossed by the thoughts and feelings of the characters. Orner’s characters are unapologetic and complex, holding guilt, fear, and love.

In “Rhinebeck”, Orner describes a couple in counseling: “They began to become the kind of people who sit all the way through the credits when there are no more names to thank.” With this singular image, we learn the complexity of what is left unsaid between the two characters. Similarly, in “Speech at the Urinal, Drake Hotel, Chicago, December 1980,” Orner builds the character of the protagonist’s father through a speech he gives his son at the urinal: “There may be a lady mayor now…but by God the Drake is still the Drake and the fruit in the men’s room urinals is still so fresh you could eat it. This is style, this is grace.”

Orner’s stories often invert our expectations, revealing the heart of the story to be focused on a character we did not expect. We expect the title story, for example, to be about Maggie Brown. Instead, “Maggie Brown” is about the narrator and his restless relationship with America’s history of race and authority. This relationship bleeds carelessly into his relationship with Maggie Brown as he touches upon how her ancestors might have been slave owners. Through the lens of the protagonist’s obsession with Maggie Brown, Orner presents the character’s entire inner world—and it’s all done in just a few pages.

Orner’s impressive stories are also peppered with visceral language. Take this little gem of a sentence in “Maggie Brown”: the protagonist says, “Her accent alone burned a hole in my lower intestines.” Orner’s sentences turn a simple introspective moment into nuanced gold: “His forearms tightened as he gripped the bottom of his chair as if he worried he might float away. I wanted to jump in his lap to weigh him down.” No time or space is wasted. Similarly, “The Going Away Party” starts with the line, “He left a note on the kitchen table.” This stark introduction to a story that explores the impact of suicide on a family doesn’t need any more buildup to situate us in the scene.

Orner ends his collection with the hundred-page novella “Walt Kaplan is Broke,” the story of a middle-aged man barely scraping by, both in health and wealth, who is surrounded by equally mundane but charming supportive characters. We walk with him through recovery from a heart attack and also through an existential crisis; in this way, Orner provides the reader with an ending to his collection and provides us with a life we come to care deeply about.

“I’m always looking for a story that sticks in my head and won’t leave it for some reason,” Orner said in his Dartmouth interview. In Maggie Brown & Others, he builds these stories carefully—full of nuance and a special kind of lightness—and hands them to us on an assorted platter.