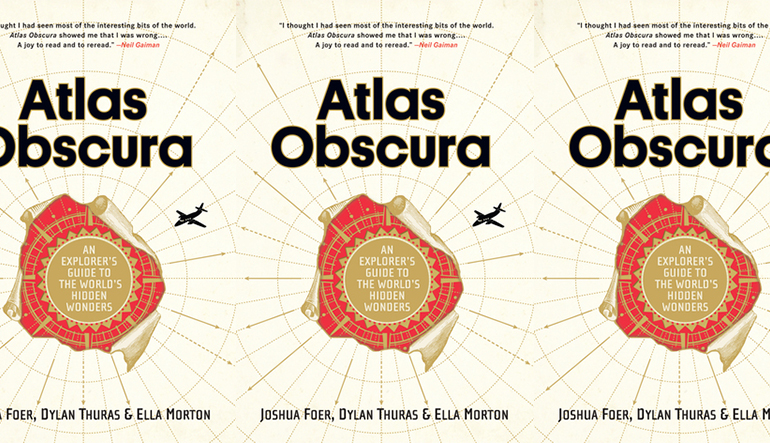 If you’re like me, then you associate atlases with maps. Maybe it’s part of the larger, more detailed, colorful variety, but an atlas is still a map. The kind where you can look up the average temperature of the Ganges River or the population density of the Gobi Desert.

Back in the day, an atlas was the kind of map for a kid who likes shiny objects. Colorful charts of rainfall next to pictures of volcanoes made it the most entertaining reference book in the room. One page gave you information about a watershed in Montgomery County, Maryland, while another focused on ecotones in Southern France. Sometimes the desk atlas was bound in hardcover, too, and placed next to our dictionaries. But as far as I’m concerned, an atlas will always be a map on steroids.

Atlas Obscura: An Explorer’s Guide to the World’s Hidden Wonders proves my understanding of these matters is grossly inaccurate.

This isn’t your geography teachers’ atlas. Technically, Atlas Obscura: An Explorer’s Guide to the World’s Hidden Wonders isn’t really an atlas, either. It’s a 480-page chronicle of the weirdest places on Earth. Within the first few pages, Atlas showcases glowworm caves in New Zealand and a weather-forecasting device powered by leeches in Devon, England. This is the ideal travel guide for an imaginative shut-in.

But Foer crams so many world-wide oddities in here, any text is forced to the margins. It’s not long before Atlas Obscura becomes eye candy: glossy, tantalizing, and wholly unfulfilling. Not surprisingly, Atlas shares a lot in common with the media monolith known as the Internet—it’s full of the sites and bits that become our time-gulping rabbit hole.

Foer, Thuras and Morton’s book reminds me of The Guinness Book of World Records. As a kid, I often ran to Guinness for obscure facts—the more arcane, the better—and it rarely disappointed.

Atlas won’t disappoint those looking for amusing photographs or little-known realities. You’ll quickly understand why some of these grotesque locales are hidden and marvel at the unknown beauty of others. I found both the occult museum and Jeremy Benthams’ mummy worth the price of admission alone.