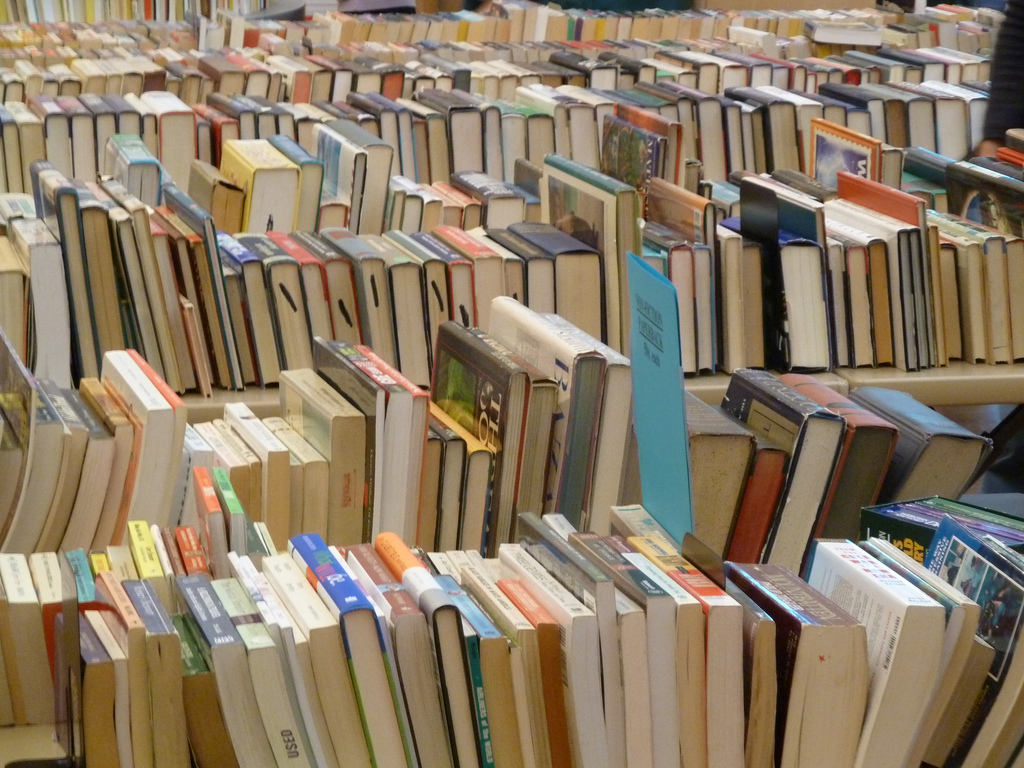 It’s a digital age, but we’re still mad for paper! Even as readers embrace the connectivity and convenience offered by iPads and Kindles, there are still many good reasons to celebrate a book’s physicality. In Ploughshares’ Book Arts series, we’ll be looking at some of the artists, curators, and craftspeople who work to keep things fresh and relevant.

They’re the kind of outdated, discarded books you might find in a dusty corner of a thrift store, or branded with a big “WITHDRAWN” stamp at your public library’s annual sale.  Dog-eared orphans of the information storm.

Andrew Beccone, a Brooklyn-based visual artist with a Masters in Library and Informational Science, sees these castoffs as treasures. Fascinated by the visual goldmine of diagrams, illustrations, and photographs these oddball books contain, he created a dedicated home for them, the Reanimation Library, offering each forgotten volume a second chance at life.

I interviewed Andrew in order to find out more about this fascinating project.

PSHARES: You once described the Reanimation Library as being a “platypus.” Please explain.

BECCONE: I use a platypus analogy because I find the library somewhat challenging to classify. I understand it as both a library and an art project, and I try to give each of these elements equal attention, but sometimes they work against each other or contradict themselves in ways that feel unwieldy or awkward. It’s an odd creature. The Wikipedia article on platypuses states that they are milk-producing, egg-laying, venomous, duck-billed, beaver-tailed, and otter-footed. This seems like a pretty good description of the library to me.

PSHARES: I understand the library began as a small collection you gathered for your own use as an artist. How did you get the idea to develop it into a resource center open to the public?

BECCONE: I decided that I wanted to turn the library into a public collection in 2002, after I had been collecting books for about a year. There were two main thoughts behind this decision: I suspected that other people would be interested in the collection and that they would use it in ways that I wouldn’t. I also wanted to bring attention to the images in “outdated” books that I felt were exceptional from a visual standpoint. I wanted to demonstrate their enduring value.

PSHARES: As the proprietor of your own institution you get to make the rules. Are yours markedly different from, say, the New York Public Library’s?

BECCONE: I certainly implement some traditional library conventions—I catalog the collection according to Library of Congress Classification, for instance—but I think that I have far more leeway than most libraries in terms of collection development. The biggest difference is that there isn’t any sort of bureaucracy to deal with, so I have a large degree of flexibility in terms of what I can do and how I do them. That said, there is a use value to the collection that benefits from using call numbers and so on. It’s all part of balancing its different components.

PSHARES: Tell us about an art project that’s been sparked/inspired by books in the collection.

BECCONE: Kristoffer Ørum produced a piece for the Hyde Park Branch in Chicago called Reanimation Library Rehash, which consisted of a rolodex filled with catalog cards of potential Reanimation Library books that he generated by extracting title, subject, and call numbers from the library’s database and then writing a program to randomly recombine this data. This resulted in an entire alternate/mutant catalog with titles that ranged from the plausible (Japanese Airlines Patrol) to the ridiculous (Spinal Terrariums Space Seat).

PSHARES: How did you choose the location for the library? What are some of the advantages and disadvantages of that spot?

BECCONE: The library is housed within Proteus Gowanus, a gallery and reading room that I came across in 2006. My affiliation with them began shortly thereafter when I contacted Sasha Chavchavadze to find out how she’d gone about starting it. At that meeting, I told her about the library and of my desire to house it in a public space. One thing led to another and pretty soon she asked me if I would be interested in co-curating a show on artists and libraries. I did. So we put that show together and over the course of the year, we discovered that we got along. In 2007, I started renting space at Proteus and have been there ever since.

I think the fact that PG is not specifically an art space—that it brings together people from many different disciplines—is one of its greatest strengths, and has helped to expose the library to a wide variety of people from different backgrounds. The biggest drawback is that it sits on the Gowanus Canal, so every time a giant hurricane heads toward New York, I have the pack the entire collection up (currently around 2000 volumes) and move it to a higher floor in the building.

PSHARES: You’ve launched a few “branch libraries” in other cities also. How does this model work?

BECCONE: Branch libraries are temporary, site-sourced manifestations of the Reanimation Library that provide a way for the library to exist in dispersed locations, to engage people who might otherwise be unable to visit the main library in Brooklyn, and to exhibit library-generated artworks. They are interactive, hybrid spaces that contain elements of libraries, galleries, and studio workspaces, without settling neatly into any of those categories.

Each branch library consists of a collection of books assembled from local sources. Though branches are non-circulating, scanners and photocopiers allow visitors to make reproductions of library material for their own use. When a branch closes, its books are sent back to Brooklyn where they are integrated into the main library’s collection.

At this point, all of the branches have taken place in non-profit, artist-run gallery spaces, though I’m certainly open to other kinds of venues, and would love to have a branch library in a library at some point.

PSHARES: What’s the most you’ve paid for a book in the collection? The least?

BECCONE: I rarely buy books online because it’s often difficult to know whether or not I want a book without seeing it, but my most expensive purchase was through abebooks.com where I paid $40 for a copy of A Million Random Digits, which I purchased as soon as I learned of its existence. I’ve received many wonderful donations, and found quite a few books on the street, so a good portion of the collection has come to me for free.

PSHARES:  Any exciting new titles we’ll be seeing on the shelves soon?

BECCONE: Nelson Harst has donated a number of great books, but A Dictionary of Russian Gesture takes the cake. It’s currently in the process of being cataloged, but should be on the shelves shortly. I’m also pretty excited about a book that I found for the Franklin Street Branch in Stamford, CT—Neuropharmacology: Transactions of the Third Conference, which, among other treats, features verbatim transcripts of scientists discussing the results of giving alcohol to rats and LSD to snails.

PSHARES: There’s a lot of unintentional absurdist humor in many of the images in the collection. Why do you think these kinds of illustrations/diagrams have that effect?

BECCONE: The strangest images in the collection tend to result from esoteric subject matter combined with questionable visual strategies. Serum Protein Abnormalities: Diagnostic and Clinical Aspects is a good example. This is a highly specialized text that clearly has a limited audience. The title alone suggests that it should be outrageously boring/incomprehensible to the layperson. But it has these unbelievably strange and stylized images of humans. Why is the woman depicting clinical features of iron deficiency wearing a bikini? What is she holding in her left hand? And how about the fellow in an intravascular hemolytic state—why does he look like a young Lemmy Kilmister?

But there are also plenty of diagrammatic images in the world that aren’t particularly strange, including many in the library’s collection. There’s a large preponderance of strange material in the Reanimation Library primarily because I’m attracted to the absurd and I’m largely responsible for developing the library’s overall aesthetic shape.

The Reanimation Library is located at 543 Union St., Brooklyn, NY and is open to the public Thursday & Friday, 3-6pm, Saturday & Sunday, 12-6pm and by appointment. Its extensive collection of images and titles is also browsable online. (Warning: it’s addictive!)

Nora Maynard's recent work has appeared in Salon, The Millions, Drunken Boat, Necessary Fiction, and Underwater New York, among others. She was previously a weekly columnist for Apartment Therapy: The Kitchn, 2006-2011. Nora's been awarded fiction fellowships by Ucross, Blue Mountain Center, Millay Colony, Ragdale, and I-Park. She's a winner of the Bronx Writers’ Center/Bronx Council of the Arts Chapter One Competition, and a member of the Board of Directors for The Millay Colony for the Arts. She recently completed her ninth marathon and her first novel. www.noramaynard.com