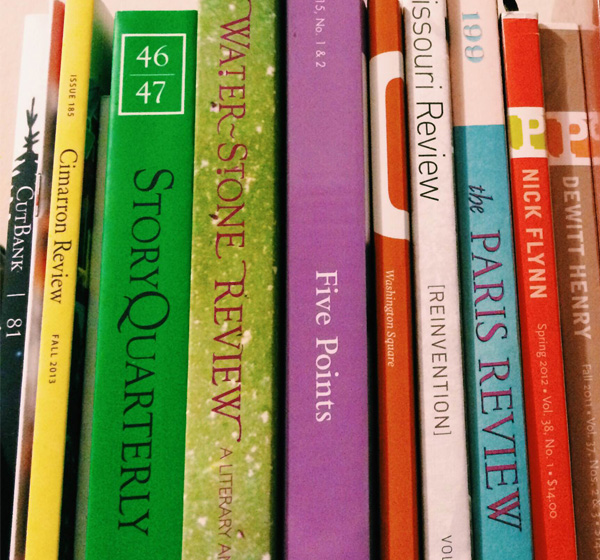 In graduate school, I worked on the staff of two different literary journals. I was new to the writing world and the idea of working behinds the scenes on a journal—the very kind of journal that I hoped to be published in—was thrilling. It felt like a great privilege, like I was the luckiest Master’s candidate in the world. The shine wore off pretty quickly when the slush pile rolled in and the deadlines stacked up, but it was still a privilege. Every bad story was a manual on what not to do, and the good stories led me to writers that I admire.

After I graduated, my time disappeared quickly, eaten up by work, a relationship, family, friends. When I joined the staff of Pacifica Literary Review several years after I graduated, it felt very different from the journals I worked on in grad school. All of the editors had worked on journals before and knew the drill, all of us had real jobs, and few of us had free time. Running a journal, I found, was a ridiculous amount of work. Why, when there are literally thousands of small magazines across the country, would anybody want to start a new one.

“I started Pacifica because I had no nice things,” says Matt Muth, the journal’s editor-in-chief. “I was two years out of my MFA, my friends were getting published, getting agents, and I didn’t have shit going for me, so I started a lit journal.” Muth has built a small but solid following for the journal over the last three years, sponsoring events across the country and placing it on magazine stands throughout the west. “I had no idea how much work it would be. I started the journal, but that didn’t mean I knew how to run one. I had to figure it out on the fly. It turned out I liked it, and I was good at it.”

Muth’s experience is far from singular. Many writers find themselves out of their MFA with “no nice things,” suddenly missing the graduate community they took for granted. It’s how a lot of writerly support projects start.

“I’m all about that community,” says Chelsea Werner-Jatzke. Werner-Jatzke recently left Pacifica to focus on her writing and other projects, among them an editorial directorship at the Conium Review and a writer’s retreat in rural Washington called Till, which she co-founded—you guessed it—right out of her MFA. When I ask her why she dedicates so much of her time to working on literary journals, she says, “I suppose it’s reciprocal. You want to be published, and you want to give other people opportunities to be published. And of course, I love publishing people’s first stories. That’s always a great feeling.”

You can learn a lot by paying attention to these little journals. “When I started submitting, I was only submitting to, like, Tin House and Glimmer Train,” Werner-Jatzke says. “But when I started reading the bios of writers I admired, contemporary writers, I found all these other little magazines I had never heard of. Working on a journal opens your eyes to that, too—if you’ve published the same people as Journal X, let’s check out Journal X and see if they want to do a reading with us.”

So many writers feel lost and miserable after they graduate, and it can be overwhelming to try and find your place amongst thousands of literary journals, but there’s a joy in that too. “It’s like a river,” Werner-Jatzke says. “You slowly carve out these little nooks and tributaries in the landscape that you flow through. You find your niche.”