Home
»
Book Reviews
»
Nonfiction
»
NOTES ON THE STATE OF VIRGINIA: Journey to the Center of an American Document, Queries II and III 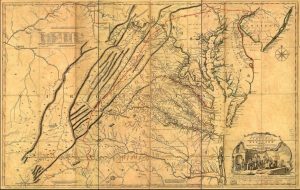 This is the second installment of a year-long journey through Thomas Jefferson’s Notes on the State of Virginia. Here’s the first installment.

**
Query II: A notice of its rivers, rivulets, and how far they are navigable
Query III: A notice of the best Seaports of the State, and how big are the vessels they can receive

When we talk about Virginia, we must talk about water. The Atlantic World begins with storms and tides, with strange ships alighting on new shores.

Despite Jefferson’s faith in the fixity of what he calls “the economy of nature” (Query VI), nothing really holds still in his world. Jefferson’s Virginia, the “area somewhat triangular” he delineates in Query I, actually is a porous landscape channeled by rivers and marshes of varying depths. Hard boundaries now dissolve in the water that flows over and through the land. Likewise, the rivers which Jefferson catalogs in Query II reflect a glimmering overlay of colonial and Native vocabularies: James. Monongahela. Rivanna. York. Names branch into other names. Jefferson observes that the Cumberland River is also called the Shawnee; and when he speculates about the sources of the Missouri, he alludes to stories told by Spanish merchants based in the once-French, now-Creole settlement of St. Louis.

This is how one world floods into the next.

Lately I’ve been thinking about constraint in poetry. The blank page has always frightened me with its teeming boundlessness. I’m afraid of what looks like emptiness, but I also fear encountering the many obstacles—painful memories, contradictory emotions, half-healed arguments—that are submerged just beneath my everyday speech, but which make themselves apparent at the moment of writerly composition. Still, I recognize that the most powerful lyrics are experiments in vulnerable utterance, and I want to be vulnerable in my poems. So: I’m a poet who craves form, who seeks a vessel to take me through the perilous slurry of a work-in-progress. I’ve always held repetition like a lantern against the disorienting darkness that descends when I venture into a new poem. One of my earliest teachers, Gregory Orr, writes in Poetry as Survival that incantation is a “primal ordering power” of the lyric:

With incantation the self discovers that it can be sustained, if all else fails, through rhythmic repetition alone. In these instances, incantation is like a woven raft of sound on which the self floats above the floodwaters of chaos.

Early Virginian traders often use rafts to transport their goods across treacherous waters. Jefferson’s riverbanks are inundated by seasonal floods or clapped in ice for months on end. Still, these waterways often are more reliable than the Commonwealth’s roads, which are slowed by the plodding pace of horses, vulnerable to banditry, and utterly impassable in storms. But in Virginia, the water marries itself to the land in complicated designs. There’s always mud to navigate, tangled roots, or the opposite: suffocating drought. This is no place for big ships. In Jefferson’s time, you can traverse many of Virginia’s rivers only by canoe, flat-bottomed bateau, or narrow pirogue scooped from the trunk of a tree.

At the moment, I’m writing villanelles, strictly-patterned, nineteen-line poems with roots in European rustic songs. In a villanelle, the first and third lines of the opening stanza must repeat in a certain pattern in subsequent stanzas, a process that weaves the poem into the kind of sonic “raft” that Orr describes. Just as Jefferson returns to his father’s hand-drawn maps of Virginia, I turn to the villanelle for a schematic that tells me where to go with my sounds, and when. With each villanelle I write, I accumulate experiential knowledge that helps me get through the next one. Likewise, for every river that Jefferson names in Query II, he describes its character and identifies the type of vessel that can travel its waters. The Muskingum accommodates canoes and light bateaux; the Chickahominy has a troublesome sandbar at its mouth; the Ohio can transport a fully loaded man-of-war all the way to New Orleans.

For me, the most difficult part of any villanelle is line 3. This line has to propel the poem to its conclusion—in fact, line 3 becomes the concluding line of the finished poem. At the same time, this line must complement line 1 (the other repeated line in a villanelle) without “answering” it too neatly (which would close down the poem early) or refuting it too overtly (which would leave the poem unresolved in the end). Ideally, the two repeated lines of a villanelle should comprise the planks and ribs of the lyric bateau that carries my poem over the unfolding rapids of my thought. The poem arises as the durable artifact of that journey in language.

But nothing holds still. I have to make peace with that.

In 1781, if you want to transport thirty hogshead of tobacco from southern Virginia to the port of Mobile, you have to navigate the Tennessee River south to where it meets Muscle Shoals, Alabama, avoiding a dangerous whirlpool that Jefferson calls “the Sucking-pot,” and portage—or hand-carry—your vessel overland to the Mobile River, which drains into the Gulf of Mexico. You need men to paddle your small vessels, and more men to load and lighten them along the way. Be ready to jump out and pull your boats along the shoreline when mud and roots threaten. These are the constraints that bind you in this world, but maybe you’ll get to Mobile.

The beauty of writing with poetic constraint is that, once committed to a form, you’re free in other ways. Though pastoral subjects—shepherds, meadows, and rustic amusements—are traditional for villanelles, I’m enjoying the dark recursiveness afforded by the incantatory repetitions. Sometimes, as in the below example, I don’t even end with an exact repetition of line 3; I’ll create a variation that feels right for the poem. With the villanelle as a tool, I can write about lost love, nostalgia, obsession, and psychological disturbance without having to relay the causal “stories” behind these things. Because the villanelle is, at its foundation, a musical form, the poems I write in this mode can proceed as a series of plaintive refrains that resolve sonically, if not narratively. I like that.

ESTIVAL
When the arms of the larkspur dial open
it’s only natural to want to dissolve. In the glinting haze
you have nothing to do but keep moving

inward. Here’s your realm of green sepals, tall
as knights. Your calyx sharpens over a dominion of seeds.
When the arms of the larkspur dial open

draw your wedding ring in mulch. Don’t stand
around too long. Since all parts of the larkspur are toxic
you have nothing to do. Keep moving

with patience over the hooks & buttons of sun.
July is an alkaloid tongue, sunk in botanical Latin.
But when the arms of the larkspur dial open

you can learn to climb. All the way up
to the silent blue beak at the top of your thought.
There’s nothing to do but keep moving

hand over hand. Time widens, just like your body
sealed shut in the light. An inner world hums
as the arms of the larkspur dial open.
There’s nothing for you here. Move on.