Home
»
Uncategorized
»
Of All Things: The Signature

Kelly Link’s inscription has it all.

Congratulations! You’ve published a book, and people are lining up to buy it. Now begins the trickiest part of an author’s journey: signing your own book.

You’ve read an excerpt, charmed the crowd. You’ve perfected the swooshy drama of your signature. Uncap your Official Signing Pen. Take a seat.

Lined up at your signing table are:

What do you write? Best Wishes? Keep Laughing? Every inscription seems too generic or too clichéd, especially for a writer. Oh no, did you really just write the word Awesome? Wait, does your beloved mentor’s name have one “n” or two? Does this pen have an eraser? Great, now you’re smudging.

Despite publishing (and signing) two story collections, I still suffer from Book-Signing Anxiety. It’s a ridiculous problem. I mean, this is my own title page. A kind person has bought the book, and all she wants is my inscription.

Plus, I love giving readings. Readings are outward, interactive, and in my case, collaborative—I assign speaking parts to the audience. Readings are a blast.

But signing a book for a reader is quieter, more personal. It’s also, for me, the nexus of several anxieties: spontaneous wit, good penmanship, accurate spelling, social grace, heartfelt sentiment, and timed writing.

They’re Already On Your Side

Silly, right? Before freaking out, let’s acknowledge the privilege of having any readers. As poet Dan Albergotti observes, “What an honor that someone cares enough about what I’ve written to want my signature in their copy of the book. I’m in awe at the fact it’s happening, really.”

Besides, Volt author Alan Heathcock reminds us, “The truth is that people who buy your book, and want you to sign their book, are already on your side. You may lose them once they’ve read the book, so I’m glad to sign the book and write them a personal note, if for no other reason than to make it harder for them to sell it on E-Bay.”

Along with gratitude, it helps to have a template. When Corium editor Lauren Becker’s first book was published in June, she was ready: “I decided to choose something specific about the book’s new owner, like ‘(Name of person) – You have an impeccable beard and an excellent pen. Hope you enjoy the book!’ Usually I draw an awkwardly shaped heart and sign my first name. Otherwise, I say something generic like ‘I hope you enjoy the book. Best, Lauren Becker.’” 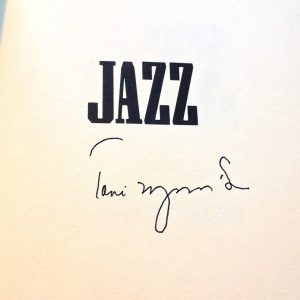 Toni Morrison’s signature. What more do you need?

Boilerplates don’t solve everything, though. Poet and essayist Juliana Gray says, “My boilerplate is ‘A pleasure to meet you at X. I hope you enjoy these poems’ But won’t people compare the inscriptions and be insulted if they see I’ve written the same thing in each? So then I try to mix it up by inserting adjectives: ‘dark little poems,’ ‘weird little poems.’ That doesn’t help.”

Worse yet, Gray’s handwriting (like mine) “looks like the agonized, blocky print of a ten-year-old boy who’s been told by his teacher that he is not to use his left hand and must learn to use his right. I feel like I should write something personal when I sign a book, but the more I write, the worse it looks. That title page was so clean and nice before I got hold of it.”

Even if we’re confident about boilerplates, we stress about spelling. Specifically, spelling—and misspelling—names. Dan Albergotti recounts our common pain: “I once inscribed a book for a friend named ‘Carrie’—a friend, mind you, that I’d known for years—only to learn upon handing the book to her that she was, in fact, ‘Kari.’ I’d never seen her name written and had always assumed. Embarrassing.”

Juliana Gray has a solution: “I have a hard time remembering people’s names, especially people I just met, so I try to cover by appearing meticulous about spelling. ‘Could you spell your name for me? Ah, so it’s just B-O-B, then? No silent H?’”

What makes a good inscription? First and foremost: drawings. Lauren Becker “was so geeked out to meet George Saunders that I was just thrilled he wrote my name. He also drew a rudimentary picture that kind of looks like a tomato, but I think it’s meant to be him with a few strands of hair.” Juliana Gray describes how “Claire Vaye Watkins sketched an outline of Nevada in my copy of Battleborn, and Tom Franklin drew a little possum in my copy of Poachers. ‘The only animal to survive this book,’ he captioned it. I love that little possum.” 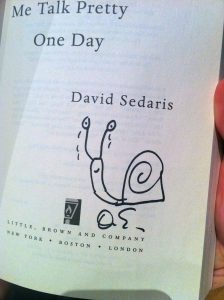 In fact, harrowing books are well-suited to author drawings. “I have a tag-line and I usually draw a picture of a mountain with smoke coming trailing out from a high cave,” says Alan Heathcock. “A few times I’ve drawn a picture of a man hitting another man with a tire iron. Once, by request, I drew a man riding a cow. Gotta give folks a good show.”

Heathcock also understands the disturbing power of images: “One author, who will remain nameless, signed the title page and drew a picture of a naked old man beside a pig. The illustration had absolutely nothing to do with the book’s content. Hilarious at the time, I now can’t read that book without the image of a pig eyeing wrinkly man-parts popping into my head. It’s endeared me to the writer, but totally ruined the book.”

Words of Laughter and Flirtation

Can’t draw? Choose words that joke or praise. Juliana Gray’s “non-sentimental favorite is from the poet Joshua Mehigan, who wrote in my copy of The Optimist, ‘You are the cat’s pajamas!’ And so I strive to be the cat’s pajamas, every day.”

Dan Albergotti agrees: “One author made a delightfully awful pun on the title of my own book in her inscription and followed it with ‘Har.’ Another writer followed her signature with the first four words of Larkin’s ‘This Be the Verse.’ Memorable.”

What’s the Worst That Can Happen?

Still worried? Okay, let’s take Book-Signing Anxiety to the extreme. Let’s say you write something bizarre, or make a joke that’s taken the wrong way. What’s the worst that can happen?

If you’re David Sedaris, you find the title of your next book. At one of his legendary, hours-long book signings, “This woman wanted me to write to her daughter: Explore your possibilities. And I said, well, I’ll keep the word ‘explore.’And then I wrote: Let’s explore diabetes— then I thought, I’m not done yet— with owls. And then I thought: That’s the title of my book.”

Yes, it’s possible for an inscription to change lives—including those of people we’ve yet to meet. Alan Heathcock once had “a young writing student ask me to sign a book for her mother. She told me her mother wasn’t much of a reader and didn’t approve of her being a writer. My student jokingly asked that I set her mother straight. So for ten minutes I wrote a note inside about the great importance of literature in our world, and how noble a pursuit it was that her daughter was going to change the world with words. I did it just to be goofy.”

“But a year and a half later, I met a woman at an event who told me I’d signed her daughter’s book with a little manifesto about writing inside. She told me she had a new appreciation for literature, was now in a book club— and that she bragged to everyone that her daughter was a writer.”