Home
»
Reading
»
On the Road with “The Lady of Shalott” 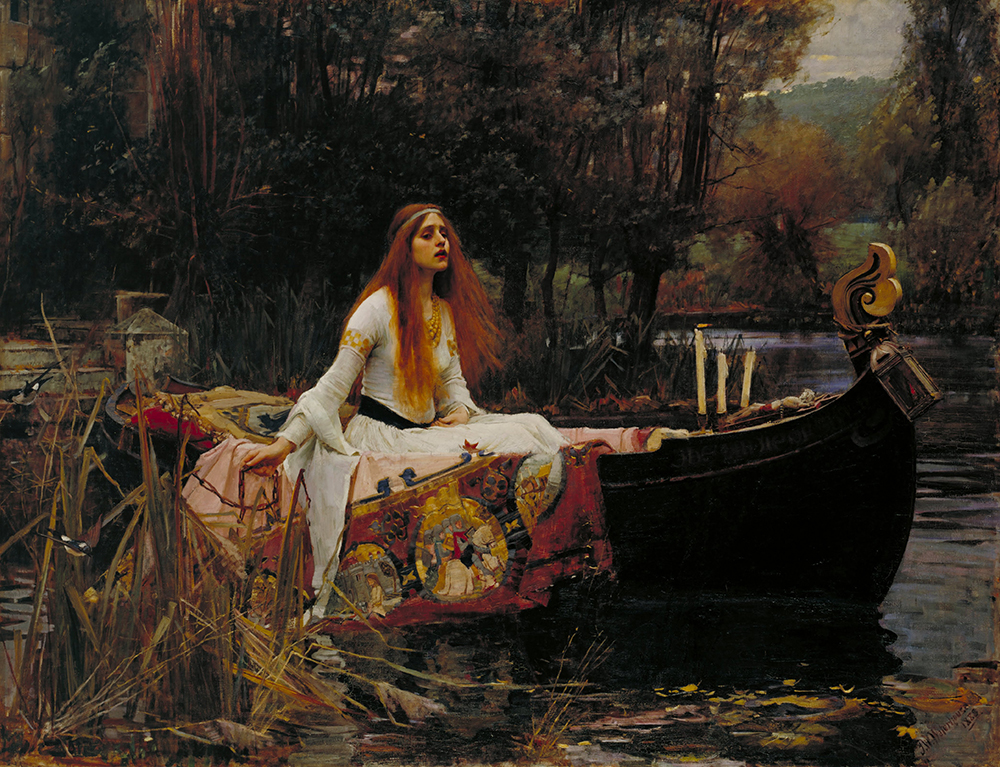 On long drives, I’ve found various ways to occupy myself. Like choreographing tap dances to “Annabel Lee,” working out how to sing the “Brady Bunch” theme song to the tune of “Ode to Joy,” and attempting to memorize Tennyson’s “Lady of Shalott,” my project as I drove from PA to the Midwest last summer.

I already knew most of it, at least the haunting version with Celtic overtones as written and recorded by Canadian musician Loreena McKennitt. Though she made some cuts from the original poem, McKennitt’s song still clocks in at more than eleven minutes, as my 16-year-old daughter likes to point out, inevitably adding, “This is SO depressing” before she drops off to sleep.

I’ve always just skimmed the whole ending section about the Lady floating down the river, her blood “frozen slowly,” her eyes “darkened wholly,” her death so prolonged that I’ve found myself giggling inappropriately.

I was always more interested in the part in which the Lady is confined to her tower, weaving a tapestry of the life she sees reflected in her mirror, prohibited from confronting the world head-on, even through a window. Maybe the Lady’s downfall is that she turns away from her art and lets herself be dazzled by the sight of Lancelot riding by below, or maybe her art is too insulated to begin with. Neither interpretation bodes well for women artists historically, since most had little time to do creative work and limited opportunities to engage with the world outside of their homes.

As I drive, I get chills when McKinnett’s soprano shivers and shimmers through the lines, “willows whiten, aspens quiver/Little breezes dusk and shiver,” words that evoke place without becoming static, building tension toward the moment when the Lady embraces her restlessness. Instead of saying, “I hate my life,” she says it so much more poetically: “’I am half sick of shadows,’ said the Lady of Shalott.”

After all, she hath no loyal knight and true and so is fully primed for discontent when Lancelot comes bursting into view through the barley sheaves, all dazzling and sparkly and majestic and godlike. He’s kind of like a bow shot from her bower eaves, with his helmet and its plume of feathers, phallic images no doubt intended, and on top of all of that, he’s singing “Tirra Lirra,” which sounds kind of seductive to me.

And so, contrary to what’s good for her, the Lady leaves her art, and paces, and looks directly down to Camelot at the life she’s missing, and then it’s all over: “Out flew the web and floated wide;/The mirror crack’d from side to side;/’The curse is come upon me,’ cried The Lady of Shalott.” Thus, the Lady, having called upon herself some vague curse, floats off down the river, singing a carol “mournful, holy/chanted loudly, chanted lowly. . . “

A number of contemporary songs retell or allude to the story, like Kimberly Perry’s “If I Die Young.” In the video, the singer floats in a gondola, a book of Tennyson poems lying open on her chest. The song focuses on doomed romance with nary a mention of the Lady’s creative struggle. In her strikingly less musical song lyrics, Kimberly Perry’s narrator claims that her thoughts will be “worth so much more after I’m a goner/And maybe then you’ll hear the words I’ve been singing/Funny, when you’re dead how people start listen’n.”

But nobody really starts “listen’n” to the Lady after she washes ashore since she is, after all, dead. “Knight and burgher, lord and dame” show up to admire her beauty and puzzle over her identity and cross themselves in fear. After musing a little space, all Lancelot can come up with to say is, “She has a lovely face;/God in his mercy/lend her grace.” So we’ve come through this whole poem only to discover that Lancelot is an empty-headed dolt.

And I guess my daughter is right, that the story is depressing, and yet somehow it’s the perfect road poem/song, this claustrophobic tale about an island and many-towered Camelot and a doomed journey. Last summer I felt exhilarated by comparison as I drove down long, gray highways through downtown Indianapolis and St. Louis and Kansas City while my daughter snored softly next to me, unmoved.