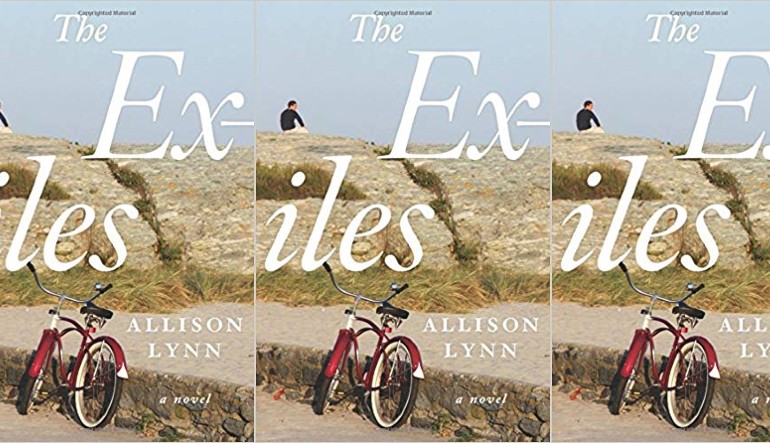 After one year of writing my novel, I took stock of what I’d accomplished—which seemed like very little. Would writing always feel like flailing? How do novelists find their way through? For guidance, I turned to published novelists, whose interviews are presented in One Year In: Writing the Novel.

Today’s novelist is Allison Lynn, author of Now You See It and The Exiles.

Allison, how long did it take you to write your newest novel, The Exiles?

The Exiles came out nine years after my first novel—and I’d say I worked on it seriously for about six of those nine years. I also held various money-making jobs during this time—one full-time position, and a lot of freelance and part-time gigs piled on top of each other. To boot, I got married during these years and had a kid.

For lack of a better way to phrase this, and not to sound like your mother but: why did it take you so long?

I’d like to say that my excuse is the huge amount of making-a-living work I was doing at the same time. And yet, plenty of writers have worked long hours as bankers, insurance agents, doctors, and still put creative stuff out at a decent clip, so I know that’s not the whole story.

I’ve come to understand that every writer has a natural pace and process that can’t completely be altered—and my process involves many, many drafts and complete overhauls. One major plot point in The Exiles didn’t occur to me until I’d been working on the book for three years. Could I have kept that plot point out of the novel and finished a year or two earlier? Maybe. But the book would have been much weaker.

In a perfect world where making a living wasn’t a barrier, I’m sure I’d have written the book faster. But I can’t imagine, given my process, completing a novel in less than two years.

In terms of creative endeavors, did you work exclusively on the novel during that time?

In terms of fiction, I tend to work only on one project at a time. For six years. Shoot me now.

What was the slowest, most frustrating part about the novel-writing process?

I do this thing where every 12-18 months I decide the book is done. It’s totally liberating! I quickly down several celebratory drinks and then give the manuscript to a few trusted readers, and often my agent. By the time I’ve sobered up, they have notes for me that largely add up to this: it’s not done. So, yeah, that’s frustrating. But I also know that I need those fake-finishes (and the associated drinks) to get me to my final finish.

What did you tell people when they’d ask, “How’s the novel?” or “When’s the novel coming out?”

There’s really only one way to answer those questions: “Better than ever!” and “Wednesday!”

If you took a break from the novel, when did you do so and why? Was it difficult to come back?

About two years into my novel, I gave birth to my son and then almost immediately lost my day job. (Hello, recession!) So there I was, with a newborn, calling up relatives to explain that, yes, it was nice that they wanted to buy us baby presents, but if they didn’t mind, what we really needed was money for diapers. I fell into a funk. I finally had time to write, but spent my days instead fretting about the rent and diaper bills.

After a few months, I looked up to see my husband (also a novelist, Michael Dahlie) staring at me. “You’re not writing,” he said. And he sounded so tremendously sad about that! His sadness snapped me right back into things. And now, whenever I hit a slump, that’s the moment I return to. I can still hear his mournful voice in my head: “You’re not writing.”

What motivated you to keep writing the novel over such a long stretch of time?  Why not simply walk away and enjoy the world as most other people, who do not try to write novels, seem to do?

Oh, geez, I hate admitting when I’m wrong. And there was a moment—as I launched into the book, into each of my books—when I was certain that my novel was worth writing, was do-able, was worthy of sacrificing so much of my time and self for. To give up would be to admit my own error. Stubbornness is a great motivator.

But also: that thing, that nugget that prodded you to start writing the book in the first place? It doesn’t go away. Not after one year. Not after five.

Any general advice to those of us committed to these pokey, slow-growing novels?

It helps to go in knowing that novels aren’t supposed to be fast or easy. I mean, every once in a while, for certain weird-genius-bizarro folk, they are. But that’s not the norm.

Also, this: Everyone’s got a natural pace for novel writing and every book sets its own schedule. Perseverance is the key. Whiskey helps, too.