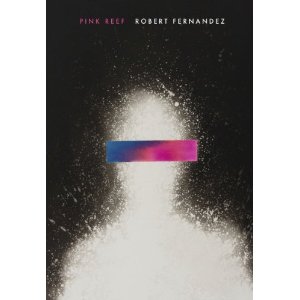 I brought this along on a recent visit to my doctor, just in case there was a wait; as it turned out, I read the whole book and started again at the beginning—not only because my doctor was running an hour behind, and not only because it was a better alternative than People, but also because it is a book that envelops and surrounds, creating a space one cannot easily leave. A doctor’s office, too, seemed an eerily suitable place to take in Fernandez’s meditations, which trace the shore where the mind meets the body.

The “pink reef” of the book’s title, mentioned in the first of its 74 untitled poems, may be another name for what some of the book’s later poems call the “brain coral.” An image of the brain flushed with blood, perhaps? Blood is mentioned often in the book; our muscles need it just as our brain does, and its circulation governs both our thinking and our acting.

Mentioned almost as often are seeds, eggs, eyes, bone. Yet for all the intense physicality of these poems, they seem equally concerned with consciousness. “I am a slot filled with meat,” Fernandez writes, having already declared, borrowing a technical term for non-physical mental states, “I am the / blistering qualia / of all that lives.”

Pink Reef feels more like a sequence than a collection. As with Rilke’s Sonnets to Orpheus or Rimbaud’s A Season in Hell, sometimes we seem to hear a consciousness expressing itself in language, other times we seem to hear language constructing a consciousness. Lines from other poets—Blake, Keats, Dunbar—surface and disappear, sometimes oddly refracted: John Donne’s “bracelet of bright hair about the bone” becomes a “bracelet of black roe about the bone.”

Elsewhere, a phrase will start looping, Steve Reich fashion, experimenting with itself:

Happily I explore
Bunches of

cherries under the
happily I explore

bouquets of paradise
roses inside of

their son a
little bunch of roses

Sometimes the poems seem to simply conjure whatever they can conjure from the sheer play of vowels and consonants: “rye light / rye eye seeing as it’s flowing / flown ground eating / across seeing.”

Pink Reef, in its unique way, participates in the mystical tradition, but not by transcending the body or merging with the cosmos. Instead, like the poems of Thomas Traherne, Fernandez’s is a visionary poetry in which consciousness dives so profoundly into the body that even the boundaries of identity begin to dissolve: “how strange to be called F-e-r-n-a-n-d-e-z,” one poem parenthetically notes. One can do a lot of exploring, it turns out, without leaving the doctor’s waiting room.