Home
»
Uncategorized
»
Ploughshares Fantasy Blog Draft Round 1 – Buckle Your Corn Belts vs Vonnegut to the Chopper!

Round 1 of the Ploughshares Fantasy Blog Draft continues! Last week The Mighty Duck Palahniuks sprinted out to a quick 33-5 lead against Leave it to Cheever only to let off the gas midway through the week and only barely eke out a 35-28 victory. Alvarez’s “role players” nearly pulled off a stunning upset, but this matchup proves once again that the bums will always win when it comes to pop vs. high culture.

Benjamin Samuel’s Plimpton-led crew advances to take on the Holden Caulbabies, the powerful group assembled by Michael Nye of the Missouri Review.

First, though, we have this week’s match-up between Buckle Your Corn Belts, manned by the Kenyon Review duo of Joumana Khatib and Marty Kezon, and Vonnegut to the Chopper, led by Ploughshares blogger Brenna Dixon!

Both teams are by and large American, but Buckle Your Corn Belts flaunts that aspect of their team. They are proudly American, and they’re deliberately Midwestern—they’ve made that clear throughout the draft. At first this seemed to create an unnecessary added degree of difficulty. Why limit yourself to one country, one region, when part of the exercise was to select bloggers from the vast repository of writers that history has provided? But Khatib and Kezon have shown that while they are American, they are by no means General American, the accent so prized in newscasters. The voices in this group are wide and varied, starting at the top spot with the editor. 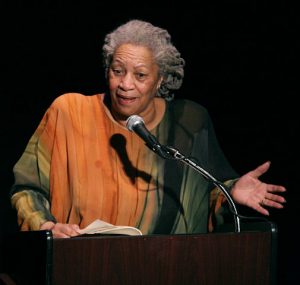 Toni Morrison, the most recent American Nobel Laureate in Literature, is, really, the most logical first pick for any American taken in the draft—the Corn Belters got top talent at the number four pick. But Morrison has her work cut out for her with Max Perkins lining up as the other editor. He had a hand in Hemingway’s Nobel, to a certain extent, so the two are all even with the major prizes, more or less.

The teams also have two legendary suicides: David Foster Wallace for the Corn Belters and Virginia Woolf for Vonnegut to the Chopper! Both writers left us far too soon, and both also produced lengthy, notoriously difficult works that challenged the limits of the genres they were working with. We’re still even.

Woolf and Bolaño add a bit of international flavoring to Dixon’s team, but the really clever move on Vonnegut to the Chopper’s part is, perhaps surprisingly, the Krakauer pick. Dixon punted on her first nonfiction pick by taking Bolano, a fiction writer at heart, and Krakauer should help balance the team against the more traditionally positioned Corn Belters. He also provides an opportunity for blockbuster-reel highlights on the bestseller lists, which can’t hurt the team’s chances.

Dixon had some fighting words on this fact:

If this were Celebrity Death Match of the Midwest, the Kenyon Review team might manage a Clothesline or a Leg Drop or two (Stone Cold Steve Austin, anyone?). But this throw-down’s happening in a bigger arena—the internet arena, the world wide web—so these players can just head on back to the cornfields.

True, the Corn Belters have some heavy-hitters on their team. Jeffrey Eugenides would surely dish out the best gossip of the suburban underbelly. But my team’s got more going for it than manicured lawns, retractable awnings, and middle class angst. We’ve crossed oceans and climbed mountains (literally; just ask Krakauer). We’ve got players from across the globe busy bending genres and creating new ones.

We make the rules. Others play by them.

On the other hand, Dixon surely can’t deny the huge respect universally granted Rita Dove and William Gass. Other than Langston Hughes, they might be the two most well respected writers in the match-up. [Editor’s note: Dixon is also the fan favorite to lose this match-up, with about 75% of reader brackets picking the Corn Belters to advance. That doesn’t prove anything, of course, but after The Mighty Duck Palahniuks’ victory in the first match, our bracket pickers are currently batting 1.000…]

One interesting note with this match-up is that both teams opted to take Advice Columnists for their wild cards. Vonnegut to the Chopper! took an actual advice veteran in Cheryl Strayed who, Dixon argued, transcended genre to create literature—while the Corn Belters took DFW arguing that his earnestness would be perfect for the position. 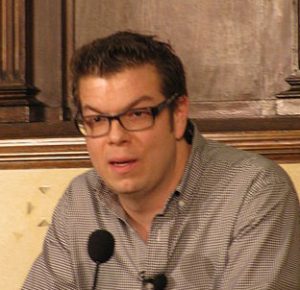 The final talking point here has to be the youth presence. Buckle Your Corn Belts has the youngest overall writer in Ben Lerner at 34—but their average team age is 60.5, whereas Vonnegut to the Chopper is half a generation younger at 56.67. This stat may not mean much, because writers—unlike athletes—sometimes gain momentum and insight as they age. But how do you think the Corn Belters’ octogenarians will fare in this more contemporary, online contest? Cast your vote on the Ploughshares Facebook page, and check back in two weeks for the start of Round 2!