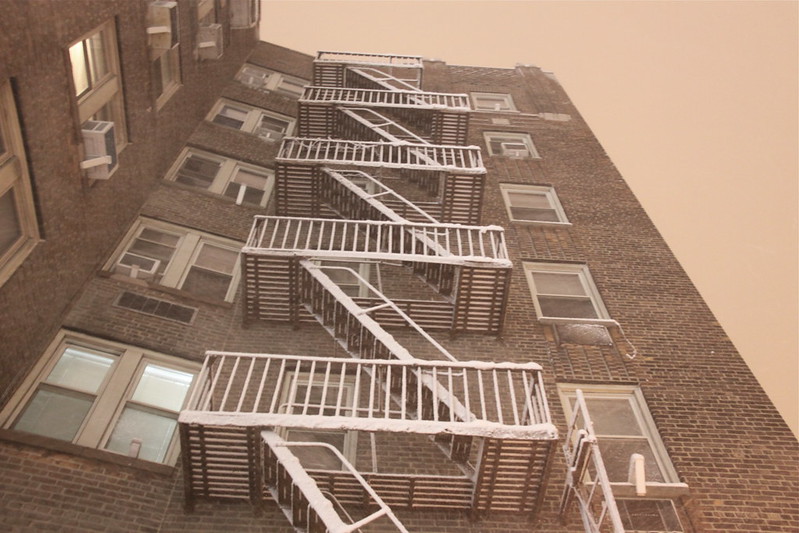 Atticus Lish’s novel Preparation for the Next Life (2014), winner of the 2015 PEN/Faulkner Award for Fiction, is a book with many stories piled up inside it, its personalities, with their long and painful histories, bumping and crashing into each other in the present. It is a love story that rarely uses the word love.

At the heart of the book is Brad Skinner, a US Army veteran just returned from his third tour of duty in Iraq, and Zou Lei, an undocumented half-Uighur, half-Han immigrant. When Skinner returns from Iraq he is racked by nightmares. He has been injured mentally and physically by three tours’ worth of trauma, the death of his buddy Sconyers, and shrapnel wounds in his back. He treats his wounds with a cocktail of painkillers, antipsychotics, and alcohol. Upon her arrival in the United States, Zou Lei sells bootleg DVDs on the New York City subway and scrapes together hours at strip mall Chinese restaurants where her coworkers holler at her in dialects that are not her own. She is arrested by immigration authorities and eventually released without an explanation. Both have arrived in Queens after long treks that originated in their respective deserts. These two people—shaken, shattered—fall into an unlikely romance.

About a hundred pages into the book, the story’s other layers begin to appear. Skinner rents a basement room he finds on Craigslist in a part of Queens that is closer to where Zou Lei lives. The family that lives in the house above, the Murphys, are an Irish American, working-class family in a neighborhood that has gone from mostly Irish to “take-your-pick.” When we first meet them, we are following Skinner as he goes to check out the apartment, remaining in his close third-person narration. We see the characters through his eyes and impressions, as when Mrs. Murphy’s daughter comes to the door, which “was answered by a giant young woman in black, a head taller than he was. There was an instant mood of cold dislike between them and they averted their eyes from each other.” The same narration is used when Skinner walks into the kitchen to meet Mrs. Murphy, and in scenes throughout the book when Skinner must go upstairs to see the Murphys about some order of business.

In other scenes, however, we are placed directly in the family’s kitchen, without Skinner’s eyes to see through. There, Mrs. Murphy sits immobile. We witness the family negotiating this via a third-person, fly-on-the-wall point of view, gaining access to conversations to which Skinner is not privy:

A shout from below:

Jimmy! Mom wants to know if you can come down here.

He went downstairs and let them make him eggs. While he was waiting for them to cook, his mother, instead of asking him what his plans were, asked him to take a look at the kitchen cabinet door, the hinge. Jimmy moved himself, he stood up from the table and moved his weight — of his body, the somber weight of his eyes, his wet beard from the shower, the weight of his damp white skin under his plaid shirt — across the room and looked at the hinge.

There’s nothing wrong with it.

Can you fix it?

He did not automatically say yes.

It’s just a screw, he said.

There are also scenes that take place upstairs while we remain with Skinner and Zou Lei in the downstairs apartment. We hear voices and footsteps overhead, and are only given a clue to what is going on by learning what Skinner hears:

Then, overhead, there was a burst of running pounding feet. A man’s voice shouting. Another voice yelling faded and came back. The pitch of the yelling rose. They heard furniture legs. Then there was an impact to a stud and the thud vibrated the frame of the house. Zou Lei sat up and pushed the cover off. The yelling turned into the sound of a woman screaming.

Skinner got up and stood listening in the doorway. She tiptoed over to listen with him. The woman was screaming and screaming and screaming — and now they could hear that she was crying. They stared up into the dark at the origin of the sound. The man continued shouting at her. He had a brogue. Skinner cocked his head, trying to understand him. The man was shouting:

Midway through the book, we learn that the Murphys’ son, Jimmy, has been released from prison after ten years. We are then given scenes to meet and follow Jimmy as he explores a world changed in his decade away. His presence in the house is also sensed by Skinner: “Skinner had become aware of someone new in the house. He had been hearing an unfamiliar voice through his ceiling, that of a man without a brogue. The man was just a set of footsteps to him, a weight on the floor. He didn’t know who he was.”

In this way, the Murphys’ development as the book’s antagonists builds around the relationship of Skinner and Zou Lei. In the scenes that follow Skinner, the close third-person narration relies on the eyes of a person so shocked by trauma that he is hyperalert to everything going on around him, even as he might wish not to be. His eyes scan the horizon like a soldier: when he first spies Jimmy in the flesh, walking home from a different direction as Skinner, Skinner notes that Jimmy is “nearly out of M16 range.”

Jimmy is attempting to re-enter society from a place just as fraught as the war zone or desert. His time in prison has been riddled with traumatic experiences like those experienced by Skinner and Zou Lei. Importantly, however, Jimmy turns out to be a vicious racist and abuser of women, such that one of his first actions upon being freed is to brutally beat and rape an Asian masseuse. Back in his childhood bedroom, working for his father, his ire perks up as he spies Zou Lei coming in and out of the back of the house.

Over the course of the novel, the plots developing around Skinner and Zou Lei accumulating until it becomes clear that they have actually been layered—literally—one on top of the other—and it’s one of the book’s strongest qualities that we can follow them concurrently, and that each story affects the path of the other, before the characters all meet face to face. The footsteps, the vibrating house, expand the scenes beyond the limits of what can be seen, resulting in echoes of the traumas experienced earlier by Skinner and Zou Lei.

Skinner battles nightmares, panic attacks, and depression, and he takes his frustrations out on Zou Lei. Zou Lei battles her own limitations, namely linguistic and cultural, in her ability to help Skinner. Both get their hopes crushed by the bureaucratic hurtles they encounter. Meanwhile, Skinner, distracted and taking to alcohol to dull his pain, loses his sensibilities and grows, only vaguely, insufficiently aware of the threat that Jimmy represents. Items start to go missing from his room. Footsteps begin to take on meaning. The American dream itself comes to be seen as a war zone, with enemies lurking outside the door.

Lish writes tumbling, wandering sentences and chooses to not set off his dialogue with quotation marks. The lack of distinction creates chaos, with context the only hint to distinguish what is said from what is overheard, or what is overheard from what resides in the head. The sentences roll with repetition, as though the headspace isn’t there to pin down a more precise phrasing, and a poetic rhythm results: “in and out of darkness and light among the Chinese signs and lights”; “arms crossed across her chest”; “he felt the other’s weight and the great immovable weight of their combined battle rattle.” The cumulative effect is one of each story, each person, ultimately subsumed into the others.

Searching for their happiness in a country that mistreats its veterans and actively oppresses immigrants and people of color, Skinner and Zou Lei find themselves at the mercy of an angry, dysfunctional family whose demons take power over their own. The ultimate infliction is the loss of the self, with every incidental sound overhead serving as a reminder of the fact.

Tags:Atticus Lish, Preparation for the Next Life