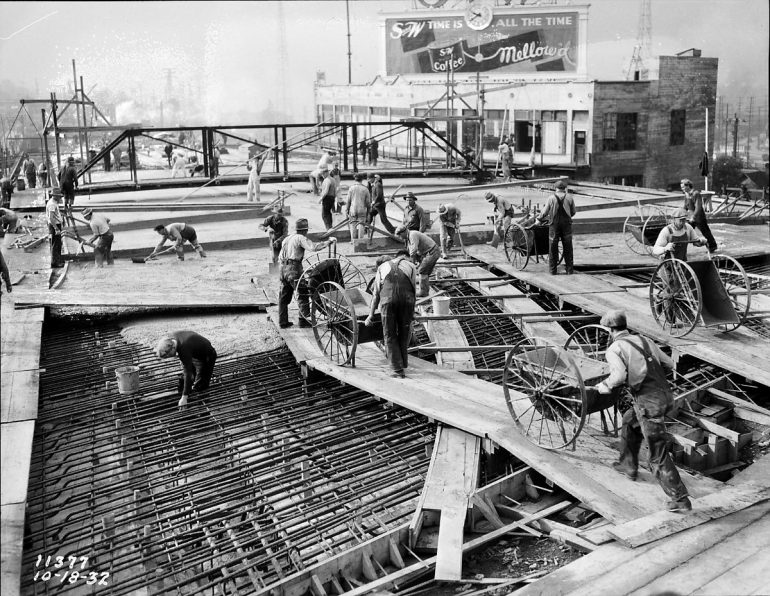 Michael Reynolds is the editor-in-chief of Europa Editions, an independent publisher of literature in translation, with a heavy emphasis on Europe that is perhaps best known for Elena Ferrante’s Neapolitan novels and Murial Barbery’s The Elegance of the Hedgehog. In 2016, Reynolds initiated a program called Bookselling Without Borders to bring one independent bookseller in the United States to the Frankfurt Book Fair in Germany. The program continued in a 2017 partnership with Other Press, another independent publisher in New York, to bring three independent booksellers to the Turin Book Fair in Italy.

For 2018, Reynolds has expanded his ambitions for the reach and influence of the program this year, and has a Kickstarter campaign running until October 29, 2017 to send 15 booksellers to book fairs in Frankfurt, Turin, and Gudalajara. We chatted against a constant thrum of construction within full view of the Europa Editions light-filled offices about Reynold’s ambitious program, Europa Editions’ unique mission in the field of translation publishing, and how Reynolds’ life and time abroad informs his sensibilities as an editor.

Maria Eliades: Where did the idea come from for Bookselling Without Borders? There are a lot of initiatives that exist to increase translation, either going into a target language or going out to increase a country’s literary profile, but I’ve never heard of someone say, Let’s tap the booksellers, and let’s send them to all these book fairs.

Michael Reynolds: It came from a combination of things. As a publisher, editors often invited us to these foreign markets on editorial trips where agents, publishers, and cultural agencies are attempting to interest us in the local product. Very often they’re successful and we’d acquire more books than we would have from that market than if we hadn’t been on that trip. They’re terrific. Over the years I’ve been on many, and I think they’re very effective and very successful.

But I also think that the challenges with translated literature these days are not limited to simply getting the books printed. The challenges extend to finding a readership for those books. I don’t think that we can feel that we’ve done our job as a publisher simply by acquiring and printing a book. To be a publisher means to find a readership, and it means to make sure the author is connected with that readership. If we extend the idea and the project of bringing books in translation to the end user, the reader, then the bookseller is necessarily involved. So over the years that I’ve been on these programs, I’ve always spoken to the cultural agencies about extending their mandate, and saying, ‘It’s great that you’ve got 10 editors coming on this trip this year, but what about maybe next year, if it was six editors, one translator, one book reviewer, and two booksellers. Wouldn’t that make a more effective vehicle for getting books in translation to the reader?’

The great fortune in this business is that it’s still very much about personal relationships. If I, as an editor, can create those sorts of relationships with my counterparts overseas, then my feeling has always been that booksellers can do the same sort of thing. That way, when I call up a reviewer and say, ‘This is the best thing ever. In Finland, they’ve gone crazy about it,’ that book reviewer can call up his counterpart that he’s met on one of these trips and say, ‘Is this true what Michael Reynolds is telling me? Because he’s always telling me the same thing.’

The same is true for booksellers. I’ve always felt that booksellers are an essential part of getting books in translation in the hands of readers, and it’s a shame that they were not included in these trips. So at a certain point, I thought, maybe we should do it ourselves.

ME: Now this Kickstarter is going to send the next wave to Frankfurt and Turin, but also to Guadalajara. Why Guadalajara?

MR: There are two reasons. First of all, it’s a growing fair. It’s fast becoming the most important trade and book fair in Latin America. It’s growing a lot. There’s a big one in Buenos Aires as well, but I think Guadalajara is growing rapidly.

The second reason is that in the United States, especially now, we want to be looking south. Politically there are those who want to build a wall between this country and Mexico. I think it’s very important for us to do what we can to promote the idea that books, bookselling, and the culture of reading is opposed to building walls. So it’s super important to us.

The Kickstarter campaign is very important to us, but the program is not contingent on Kickstarter. We do have the commitment of the five publishers who are joining us in 2018. Without Kickstarter we can send five or six booksellers. With Kickstarter we may be able to send 15.

ME: I think it’s great that they’ve reached out and are trying to get there, because there are a lot more translators these days.

ME: These translators are turning out a lot of different work, which feeds into another question I was going to ask: A lot of times –and I’ve been talking about this with many of the translators this year, including Karen Emmerich and Derick Mattern –foreign literature has this burden of being representative of its culture. Of course when you have more literature from the place, the less a single work has to be representative. How do you take that on as a publisher in the choices that you make?

MR: I think that our choices editorially are a little bit different than many of the other publishers here in this country who are doing work in translation. For want of a better word, many of the books we publish with Europa have been commercially successful in their native markets. This comes from a slightly different idea of our mission. We’re very interested in the idea that with the books that we publish, we can create a bridge not only between a writer and a readership, but between readerships.

If you have 100,000 people who have read Elena Ferrante in Italy, and 100,000 who have read Elena Ferrante in America, then we’re making that point of contact happen between those readerships. That’s a very important thing to be doing. That means that we don’t necessarily feel the burden of having to find that one work of literature in its prose, conception, or subject matter that is representative of a national current or a national identity. What we’re perhaps more interested in is work that has somehow resonated with a certain amount of readers in that country. If it’s meant something to them, if we can make it mean something for a certain number of readers here, then I feel we’ve created a potential point of contact not just between writer and reader but also between two groups of readerships.

So how do we deal with that burden? We sidestep it in a certain way. We look at works of quality, fiction that have been appealing to national readerships in their native countries. You make a very good point, the more works that are published in a given country, the less a burden is felt. I suppose that too is one reason why we don’t feel too much of that burden. We publish books from 29 different countries. In every one of those cases, we haven’t published just one book but many authors and many books from most countries.

I tend to feel, that maybe what you’re describing is a bit of a trap for bigger publishers, because you think, okay, ‘I’ve got to find that one book, and it has to be a huge success for it because I work for a big company and they’re paying a lot of money for it, lots of overheads. If it doesn’t work, if it isn’t spoken of as absolutely representative of what’s happening in Turkey or what’s happening in Poland, then it’s considered a failure.’ I think that’s too much to ask of any one book or any one author.

ME: Or even one publisher.

MR: Or even one publisher.

ME: You have editors in-house who speak various languages. How do you find the translators you work with?

MR: Because we do so many translations, quite a few of the translators that we work with, we’ve been working with for many years. Nonetheless, when we bring a new author to the list, we always ask those translators to provide us with a sample, to have a look at it, to tell us what they think, and to tell us if they’re suited to it. I don’t think even the most talented translator is suited to every voice or every author. We try very hard to make sure that our stable of translators is suited to a particular translation.

When we’re looking for new translators, again we ask for sample translations. At this point we usually find them through other publishers or other translators, or we’ve read translations that we’ve liked a lot, so we reach out to them directly. Those are the three ways.

ME: You’ve lived back and forth between the US and Italy, and you were born in Australia. How do you think that international experience has informed your work?

I know that I take a very keen interest in what’s happening in Western Europe and in France and Germany. I feel connected to those markets, literatures, and publishing traditions in a very concrete way. New York publishing can be a bit of a bubble, and so to have an outside perspective on what people are talking about here and what’s interesting there, I think is important.

ME: How do you keep up with that from the bubble that is not just New York, but the United States? I’ve noticed every time that I’ve come back from living abroad, and now that I’ve been living here for a year, that it does feel a little closed in, and that it is much harder to get a sense of what’s going on in the outside.

MR: My daily work is with foreign literatures and foreign publishers as well as with American letters and American news and American contemporary culture. So it’s just a part of my daily work. I don’t feel like I’m making an effort to take an interest in the elections in Germany or the latest book published by a Syrian author. It’s just part of what I do.

I don’t know if being here and not being in this position if it would possibly be more difficult to step outside of that bubble. Traveling helps. When you have the experience of seeing what’s in the first four pages of the newspapers here doesn’t even get a column in another newspaper, you get a sense of perspective, yeah? And you realize that your obsessions and your panic is relative, and perhaps manipulated as well. [He laughs.]