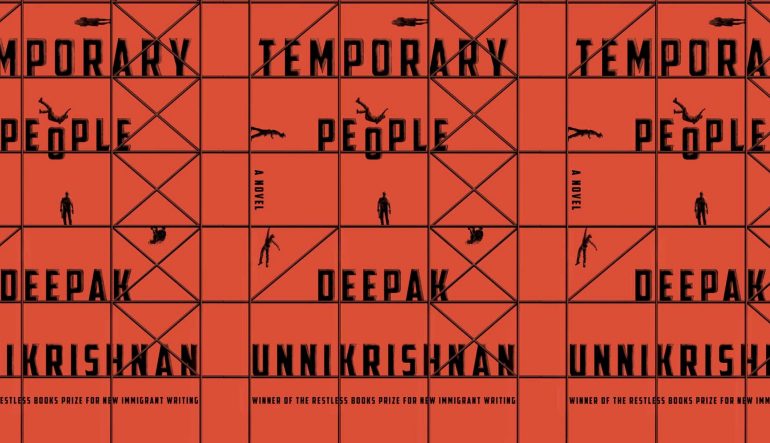 There is a short story in Deepak Unnikrishnan’s debut collection of surreal migrant Gulf fiction, Temporary People, that reads like The Metamorphosis in reverse: a cockroach awakes as a man. Or as close to a man as a roach can be: “[T]he bug wore clothes. Little shorts, a hat, and a military jacket. And he walked like a man.” Nicknamed “The General” because of his outfit, the roach becomes the resistance leader of an apartment infestation being targeted with kitchen brooms and bug spray by a young boy. In order to fend off the boy’s attacks, The General teaches the other roaches how to walk, talk, and fight like men. The younger roaches assimilate readily, the older generation frets about the loss of traditional values. They lose the battle with the boy—The General is killed—but in a way, they win the war. The story ends with the roaches eating “standing up” and speaking to each other “in the language they had been taught.”

Unnikrishnan is playing on the rhetoric of xenophobia against migrant workers in the Gulf (the immigrant as cockroach is an image often deployed by racists around the world) and immigrant anxieties about assimilation. Kafka’s use of the bizarre and nightmarish as a critique of institutions is present throughout Temporary People, as is Rushdie’s fantastic reimagining of immigrant life. Marketed as a novel by its publisher, Temporary People reads more like a loosely connected, always surreal collection of vignettes about South Asian migrant workers in the United Arab Emirates; the wealth of the Gulf is built upon an underclass of migrant workers who are refused basic labor rights and citizenship. Unnikrishnan writes of a migrant surreal, stories that insist on reimagining the Gulf we know, critiquing the brutal realities of exploitation and power in the region.

Throughout Temporary People, there is a strange, often violent shapeshifting between the human and not. Roaches become men, men become passports, tongues sever themselves from their bodies—what does it mean to be human when you’re not recognized as such? When you’ve left a part of yourself behind? In one story, a man returns home from jail, made broken and weary by the years away. “Look at my skin,” he tells his son. “Why do you think it’s this way? Look at me! Some of me—elsewhere.” He lies to his son about why he was arrested, telling him he jailed for secretly moonlighting as a “mid-sized hotel.” If the immigrant was built of bricks he would be impregnable, but it’s an impossible state when he is defined by lack—never at home, in both his old land and the new one.

“[T]ell my beautiful, beautiful boy that’s what [pravasi has] always meant: absence,” says an old woman to her grandson in another story. In “Birds,” a woman tapes together the bodies of construction workers who have fallen from their posts, proving, perhaps, that broken men are not unsalvageable. One man shares a strange dream he’s had with her:

‘My family’s with me; we all have wings. The sun’s cold. You following me? Cold! We fly.’ And as they fly, he shared, he notices that their feet possess talons, with which they can grip the top of the building, and they pull, and they fly…until they rip the building off its foundations, taking it with them, toward the gelid sun.

One man moonlights as a building, turning skin to brick in an attempt at permanence. The other takes his family and the whole structure with him, dismantling the object of his labor and escaping into the heavens. It is, of course, a dream: both stories end with dead men, far from home.

The roaches make a final appearance at the book’s end. Another boy, this one a little older but also armed with bug spray, finds them in his kitchen speaking to each other. They’re talking in “a mysterious patois” that’s formed from “the Egyptians on the eleventh floor, the Sudanese on the fifth, the Palestinians across from us, the Mallus, the Bombaywallas…words spoken to sons and daughters…pronounced and mispronounced, combined to form new sounds.” It is the familiar made unfamiliar, composed from exactly that which no one wants to listen to. The boy reaches for the spray can, but the roaches have the last word. It is something they’ve made for themselves, the unwelcome visitors at home in a language that’s all their own.