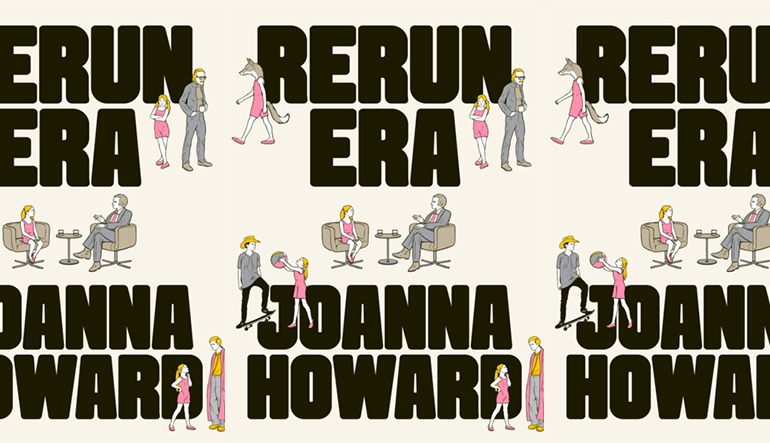 Joanna Howard, raised on reruns, doesn’t trust her memory. “I don’t like anything that goes in order,” she writes. “I just can’t remember what happens when.” So opens the section of Rerun Era labeled “I Am Born,” which is a third of the way through the book. Howard’s birth coincides—her mother later tells her—with both a terrible tornado and the end of the popular TV western Gunsmoke. This coincidence seems unimportant to Howard as a child, since, “In Oklahoma, there is always a tornado wrecking shit.” And Gunsmoke reruns will appear when she is old enough to sit for hours in the purgatory of daytime television. She will hear stories of her grandfather, who, like Gunsmoke, was gone before she is born. Preserved in the amber of repetition, what came before can be relived, but cannot be revived. You can look, but you can’t touch—you’ll get the screen all dirty.

In this propulsive memoir, Howard tracks what feels like a lifetime of childhood dislocation, but in fact is only a single year when Howard is between the ages of five and six. She wields the voice of a five-year-old with grace, recounting the horror of her brother chasing her around in a Gene Simmons mask with the drama and indignance she felt at the time. “My mom explains it’s not scary, it’s just a rock band that wears a lot of white makeup and this person has an especially long tongue. Like a demon? And this is not scary? There is no logic to this.” This narration feels like a younger Howard dictating her days to an older, wiser Howard who shapes each story to a sharp point. It’s this un-self-conscious, observational deadpan that lends humor and wit to an otherwise heartbreaking tale.

This partnership between past and present Howard is the source of the memoir’s poignancy; each shows the other is missing through memories. Present-Howard can’t understand how past-Howard missed all the terror and trauma happening around her—the death by suicide of a close family friend, and her father’s affair and eventual stroke in his mistress’ home. Meanwhile, past-Howard strives to show present-Howard how the mess of ramshackle rural America send-ups on TV helped her cope with a barren world.

Present-Howard is loath to look up the things she recalls from youth, afraid that she’ll learn what she remembers is false—that it wasn’t Dick Cavett interviewing Jerry Reed, but Glen Campbell. And yet she succumbs to the need to know: “It is much later, in that time when I am looking everything up, like crazy, because I’m scared of losing my memory of this place. I want to look it all up and have it confirmed in my mind. Otherwise you forget. Then I realize looking it up is what makes you forget. It just erases the memory.”

There’s a dislocation (lending the memoir its subtitle) when, at some point in Howard’s childhood, the shows where she saw her home of Oklahoma, or something like it, or something like she would like to see, stopped playing. Present-Howard researches the rural purge: “It’s a term for what happened to the TV. And yes, I looked it up. It’s real. That’s the problem with the look up: you are reminded that culture is ruled by the whim of a few.” And why, she wonders, shouldn’t those reruns of old westerns, full of their bad-faith frontier justice, misogyny, and racism, be consigned to the dustbin of Hollywood history? She is not nostalgic for those shows themselves. She only wants something familiar to look at, to take her focus off her own maelstrom of trauma. If these shows were to be replaced with honest and diverse representation, she would understand, “but why did everyone have to live in a penthouse or a brownstone or in Bel Air?” “No one wants to see stories about poverty and dirt and hardship on a regular basis,” she knows. “It’s a buzzkill.” Suffering is only acceptable when it is entertaining, when it is something people can watch again and again.

Howard revels in recalling the reruns that filled her days because they are what she can recall, look up, and confirm with the least pain and greatest accuracy. “Be careful,” present-Howard’s therapist reminds her. “those may be screen memories…The memories we put in place to protect us from worse memories.” So suddenly, almost at the conclusion, the specter haunting the book is named. What if we cannot trust ourselves to faithfully remember our hurt? Howard muses on this notion of “worse memories”: “Worse memories?…Worse than this thing where my dad once was, and then was not? Or was not quite not, but was very nearly not—hovering on the verge of not.” What can one do with memories that are full of pain? The mind is not a TV set so easily switched off. Trauma is relived, revived, even as it is reviled. How does one live in a world that constantly replays their pain? Roll the laugh track?