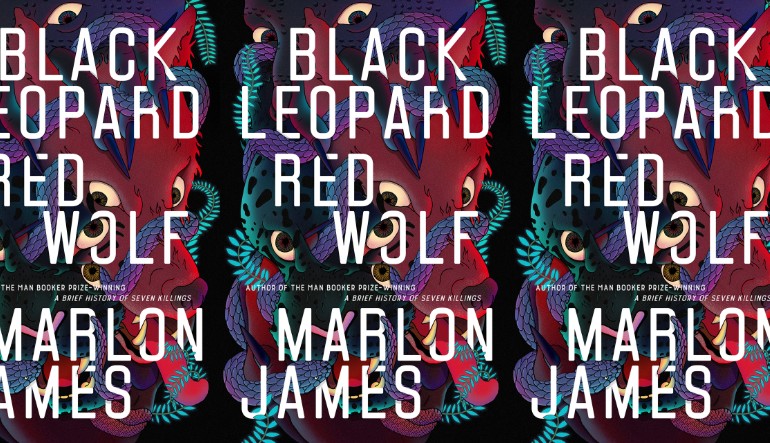 When Marlon James described his spectacular latest book as an “African Game of Thrones,” he may have sold himself short. The first chapter alone is so startling and masterfully crafted I had to set the book down and pace my room for several minutes before continuing. In Black Leopard, Red Wolf James uses the distinctive style of his Booker-winning A Brief History of Seven Killings to build an intricate and fascinating world. From a city ensconced in massive treetops where no children are ever born, to a black market for human remains literally underground, James leads readers on a journey through an Africa western fantasy has long ignored.

All this magic is channeled through James’ favorite instrument: the voice of a man, Tracker, who has lost everything except the story of how he lost it. Tracker is irreverent, insightful, and deeply compelling. “He has a nose,” it is said, and makes his living tracking down people; the novel follows his ill-fated quest to find a missing child. The very first lines tell the whole story: “The child is dead. There is nothing left to know.” Of course, there is so much left to know. Now imprisoned, Tracker recounts his odyssey from boyhood. The narrative frame calls to mind the final sections of James’ own Seven Killings, as well as Salman Rushdie’s Midnight’s Children, and Patrick Rothfuss’ Name of The Wind.

Those excited by the sound of James’ “African Game of Thrones” will find much of what they expect: warring kings and queens, sex, incest, and many gruesome and grisly deaths. But more exciting is the unexpected. James defamiliarizes things white western fantasy audiences may take for granted. A superb example comes when a character is describing his travels to distant lands and tells of a cult where the worshippers devour their God every seventh day. Another is the subversion of “Black Magic” with “Black Math” and the sinister “White Science.” These details don’t play large roles in the action of the story, but such brushstrokes of masterful worldbuilding abound.

Equally exciting, and more relevant to the narrative arc, is the characters’ queerness. Tracker, a complex, interesting character with endless agency, is queer as hell. He and his part-time lover and longtime friend, Leopard, meet saving unwanted children. Over the course of the book, this found-family becomes Tracker’s driving motivation, and is artfully wrought; the relationship provides tenderness—queer tenderness—amidst a maelstrom of violence. Tracker makes a bold and succinct declaration against enforced binaries with a flourish of James’ trademark wit: “You all believe in twos so much I wonder if any of you can count to three.” It’s about time queer characters got a chance in fantasy.

In 2014, James said one should write about three things only: “What you love, what you hate, and what you are deeply conflicted about.”  It is no surprise, then, that James writes about toxic masculinity, and its role in misogyny. Tracker himself dismisses and derides most women he encounters, calling them conniving, treacherous, and evil; inside a narrative where many women meet brutally violent ends, there’s a lot to unpack. It’s hard to get a sense of depth from the women in Black Leopard when everything is filtered through Tracker’s perspective. Another man, however, calls Tracker out on his misogyny, suggesting Tracker’s viewpoint is far from comprehensive, that maybe he’s missing what the women in the story are accomplishing—though his telling of gendered violence is honest. In life and in Black Leopard, patriarchy is omnipresent and seeks to destroy the women who fight it; by depicting how inescapable violence against women is, James reflects a painful reality, if readers can stand to see it.

At its core, the novel asks questions of power and truth. No one will give Tracker a straight answer as to the importance of this child he tracks, and at every turn he is confronted with another story, another half-truth, and it dawns on the reader that Tracker’s tale, too, is only another story. For a world at odds over what truth even means, this book is essential. James asks his audience to question who gets to tell their story, and what do they gain by it? What happens when belief collides with truth?

Even with its vampires, shapeshifters, and magic spells, Black Leopard, Red Wolf is real. Late in the book someone asks, “Why put our future in the palm of one man? Come soon, or come late, if you put power in one man’s hand, he going make a fist.” If the story is in Tracker’s palm, has he already closed his fist around it? Can we see light shining through the cracks between his fingers? Perhaps he’s protecting readers from something they could never survive knowing.