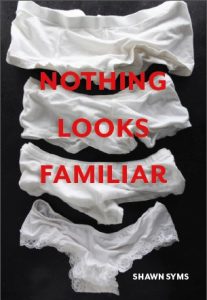 Complex characters are damn hard to write. Perhaps this explains why contemporary fiction is full of characters designed to be relatable and easily digestible. These sort of characters act as mere conduits for readers to imagine themselves inside the story. This works on a certain level, but for readers hoping for a fresh perspective, for an opportunity to step outside of themselves, these types of stories are rather unsatisfying.

Even when an author manages to produce a fully fleshed character—one with hopes and fears, vices and virtues—it is usually in a protagonist only. This is especially true in short fiction, where economy rules. Rarely are readers treated to an antagonist with clearly defined motivations. Instead we are asked to accept a rather simple and unsatisfying explanation, that the antagonist is inherently bad.

For the first several pages of “The Exchange,” one of twelve stories in Shawn Syms’ debut collection, the narrative seems to follow this example. A bully physically threatens the new kid in school, demanding that he do something risky and embarrassing: steal a pair of panties from a fellow classmate. The conflict is seemingly uncomplicated. The bully is a classic fist-shaking, smoky-smelling tough kid. As the story nears its climax, the new kid, hiding in a bathroom stall, sees the bully from a different perspective when he overhears a private conversation.

“If I don’t bring them home tonight,” the bully says, referring to the stolen panties, “my dad’s gonna give me a lot more than a fat lip.” Here the reader is allowed a moment to feel sympathy for the antagonist. We learn that he is the perpetrator in one situation but the victim in another. How are we to feel, then, when his plan backfires and he’s publicly humiliated before his classmates? There’s a sense justice in the bully being punished for his misdeeds, yet there is also a lingering sadness in knowing that the boy was only doing wrong to protect himself.

Such incongruous feelings are not hard to find in Nothing Looks Familiar. In the fast-paced, turbulent story “Four Pills,” an amateur junkie named Adam turns to assault and theft in pursuit of his high but ends up with more than he bargained for, punished in a way that seems at once fitting and undeserved. Despite his abundant flaws and near complete lack of morals, Adam’s will and determination make it difficult not to root for him. He pushes forward, rushing past warning signs with a wild abandon that is both admirable and naïve. The story’s end is absolutely chilling, even more so when reflecting on Adam’s announcement in the opening line: “I’m gonna have a good time tonight.”

Nothing Looks Familiar is a cohesive collection populated by complex characters spanning both sides of the spectrum of good and evil. These sharp stories stare unflinchingly at the illicit and taboo fragments of contemporary culture. Shawn Syms looks where others look away.

Thomas Michael Duncan writes fiction, fact, opinion, and the occasional bit of nonsense. A recent escapee of upstate New York, he lives in Lexington, South Carolina. You can haunt him on twitter @ThomasMDuncan.