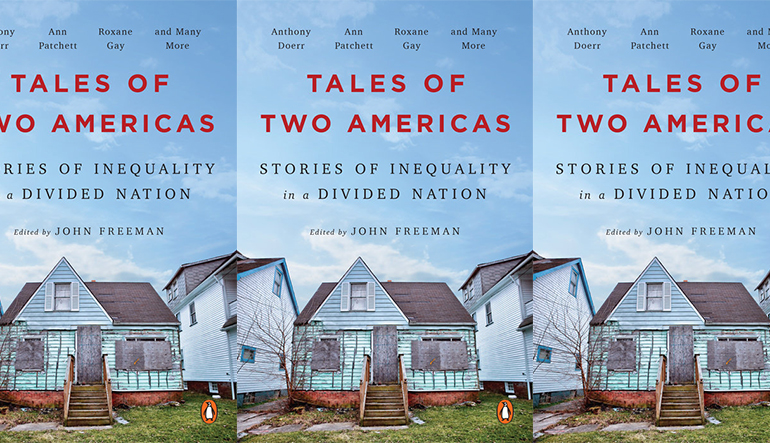 In his collection of 36 essays, poems, and stories entitled Tales of Two Americas: Stories of Inequality in a Divided Nation, John Freeman, curator of contemporary literary voices, writes “America is broken.”

Some of today’s finest writers—Eula Biss, Kevin Young, Roxane Gay, Edwidge Danticat, and Anthony Doerr among them—show us exactly how America is broken as well as the results of giving in to our nastiest weaknesses.

Karen Russell writes about her mixed reactions to Portland’s homeless population. She’s horrified at their numbers, but gets used to stepping around them to enter her apartment building. In passing, she offers them food and water, yet never her name. And when she volunteers at a soup kitchen, the “ugliest voices in me, invoking the ‘big picture’ and ‘grand scheme,’ protested: keeping a few dozen people fed, what good does that really do? Surely this was simply ‘treating the symptom.’”

Nevertheless, by writing about the homeless population, Russell acknowledges them and brings them into the larger conversation.

Richard Russo suggests that the current presidency was partially won through just such an acknowledgement. He writes that Charles Dickens found similar success through acknowledging an underserved population when he published the Pickwick Papers in 1836.

Pickwick Papers reflected members of the working class and was then embraced by those same people—the book even started a whole new audience reading for pleasure. Russo asks, “Haven’t the elites of both political parties been blind to the travails of working people?”

He continues, suggesting that the working class today may feel “angry, undervalued, and ignored,” without realizing those feelings are nothing new. “They’re just new to them. American blacks and Latinos and LGBT folks have been feeling the same way for a long time.”

Russo says that in the last presidential campaign, the winning candidate held up a “distorted mirror” which reflected bigotry and anger, but, as in the Pickwick Papers, the message came across: “I see you. I see your value.” Winning statements.

Being seen emboldens, but it’s seeing that empowers in these pieces. Freeman writes that in order to know America is broken all anyone needs is “eyes and ears and stories”— what he offers in this collection.

An all-nighter in an airport terminal jammed with stranded travelers shows a cross-section of society, though Julia Alvarez notes that the poorest aren’t represented because they are unable to afford air travel.

Still, Alvarez is temporarily entrenched in not only other people’s lives, but in the complicated hierarchy of the airline industry, which she compares to the caste system of India—it’s unjust, as well as next to impossible to affect a change that will alter our own destinies within the system; a set-up where “policy trumps compassion.”

She wonders at the kinship that’s eventually engendered among the stranded after someone calls it a “pajama party.” Have they banded together because of an “animal instinct for safety in numbers? A rock-bottom belief in ‘the kindness of strangers’? A need for the comfort of our own kind, whether blood relations or not?”

Sarah Smarsh offers what is the grammatical equivalent of sleeping in a pile on the floor with strangers; she very effectively uses second-person to present the plight of a college-educated man who sells his plasma to make ends meet.

That her essay is the physical center of the collection is not accidental. Titled “Blood Brother,” it begins, “Your brother has a hole on the inside of each arm that never quite closes.”

The Food and Drug Administration caps plasma donations at two per week, but Smarsh writes that this allowed frequency is the highest in the western world. “American plasma accounts for about 70 percent of collections worldwide. The holes that don’t heal in your brother’s arms are in thousands, maybe millions of American arms.”

She writes, “He’s your brother because you share a country, an economy, a land, a species. If you met him, you’d probably think he was witty.

“If he were your brother-brother, though, you would know him so deeply that the thought of him laying his arm down to sell what’s in his veins would make you wince. His blood and all its parts would represent to you something that cannot be assigned a monetary value.”

And why is he laying down his arm? Because he’s borrowed his way through degree programs with the faith that once the diploma was in-hand he’d be able to afford a good life. However, much of the time college debt, credit card debt, lack of affordable housing, and unavailability of well-paying jobs compound to leave even the best-educated among us selling pieces of ourselves for a few dollars.

Maybe to buy a burger and fries.

When Chris Offutt was asked to write about “trash food,” because he was a writer from Kentucky who wrote personal essays inspired by old community cookbooks, he “couldn’t see the connection between social class and garbage.”

Without specifically ever citing fast food consumption, or the weakness we give into when we take part in anything that we know isn’t right for us or for others, he wonders at calling any food or the people who eat it “trash.”

People eat what they’ve been taught to eat. People eat what is in reach both physically and economically. “The term ‘trash food’ is not about food, it’s about social class. It’s about poor people and what they can afford to eat,” Offutt writes. The food itself is what ultimately crosses the artificial boundaries determined by region, education, and income levels, he notes.

As a food, say crawfish, catches the interest of higher-class diners and is served at well-respected establishments, it’s elevated out of the category of “trash food.” In time, that elevation causes a price-hike so that people who traditionally include crawfish in their diets are no longer able to afford it, creating a protein hole in their menus.

But a collective change in diet is not what’s called for. What must be addressed is the weakness that makes us cave to our worst selves—to hate, to fear, to throw stones and words—when the loudest in the land grants permission.

Anne Kniggendorf is a freelance writer in Kansas City. Her work regularly appears in the Kansas City Star and on Kansas City’s NPR station (KCUR). Also find her writing in the Smithsonian Magazine, Saturday Evening Post, Electric Lit, and India’s Punch Magazine, as well as the Glasgow, LA, and Chicago Reviews of Books.