Home
»
Book Reviews
»
Nonfiction
»
Review: WHY BUDDHISM IS TRUE: THE SCIENCE AND PHILOSOPHY OF MEDITATION AND ENLIGHTENMENT by Robert Wright 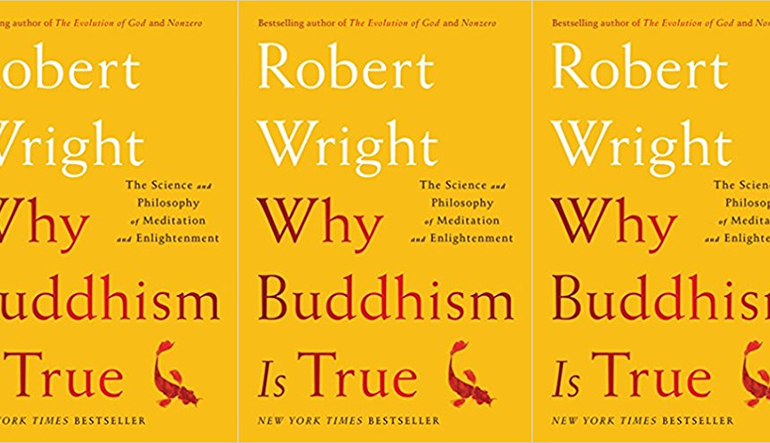 Why Buddhism is True: The Science and Philosophy of Meditation and Enlightenment
Robert Wright
Simon & Schuster; August 2017
336 pp; $27

In 1995 journalist Robert Wright published  The Moral Animal: Why We Are the Way We Are: The New Science of Evolutionary Psychology, a book exploring Darwinian theory with a modern lens, aiming to give us some perspective on how and why we act—both as individuals and as a species. Wright’s uncanny ability to distill interesting and relevant insights from a controversial theory like Evolutionary Psychology proved imminently readable. It was particularly popular among the hyper-literate, NPR-listening crowd, but it also struck a chord among the less bookish, horoscope-reading public. Both camps of readership agreed that Moral Animal raised more questions than it answered.

In his current book, Why Buddhism is True: The Science and Philosophy of Meditation and Enlightenment, however, Wright makes it clear from the get-go he’s not answering anyone’s questions—especially if they’re about faith.  Within the pages of his newest effort, it’s clear his goal is—thankfully—devoid of dogma. He’s not going to argue how our concept of God is yet another evolutionary adaptation, nor will he try to tell us how everything from three-dimensional calculus to picking your nose is all because of evolution.

He’s not even arguing that Buddhism is true.

The book’s title proves to be more of a publishing slight-of-hand than any indication on what the writer gives us. It’s forgivable, because within the first chapter Wright articulates how to integrate meditation into our lives. The history, context and application of Vissipana—the specific type of Buddhist meditation he’s concerned with here—is illustrated within a real-world context.  But this practice is also part of a larger Buddhist tradition—one rich with allegory, etymology, and Eastern philosophy—and Wright judiciously avoids biting off more than he can chew.

But even as he dips his toes in the pool, Wright can’t help but remain tethered to his rationalist roots (e.g. he glosses over tenets such as karma and reincarnation, both of which are essential fabrics to Buddhism). Nonetheless, his message is universal. We live in a world with a dizzying array of technological distractions.  Some of them—particularly social media—discourage what the essential qualities of a successful person (and family, society, etc.), like self-awareness, kindness, and discipline. Meditation can nurture these values.

Finishing the book, I couldn’t help but wonder how Wright can reconcile the “Cream Always Rises to the Top” mantra of many gung-ho Evolutionary Psychologists, and the wonderfully circular reasoning inherent in Tao and Buddhist philosophy. Wouldn’t a stop-and-smell-the-roses approach to life emphasizing introspection (one method of Vissipana) be considered dangerous by his crew? After all, we could get eaten by a wild animal, run over by a bus or even shot by the owner of those rose beds. Perhaps Wright would argue if you’ve been able to apply the principals of Viispanna,  then at least you’d die with some insight.

Perhaps that’s the best any of us can ask for.