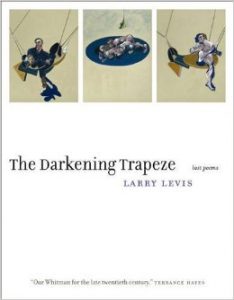 The Darkening Trapeze, Larry Levis’ second posthumous book of poems since his death in 1996, is a strikingly self-conscious collection, a book whose lyrical depth and sweeping beauty is checked by gossip, unflattering confessions, jokes, and self-deprecation at every turn. The poems expose the poet’s reflexive attempts to get through the days through psychiatric evaluation, drinking, and recreational drug use in poems shot through with irresistible wit and humility.

At the end of “Twelve Thirty One Nineteen Ninety Nine,” for example, Levis hears an answer to the many rhetorical questions that hold the poem together. He asks:

Then, the last line repeats an answer he has received from somewhere, and the questions are suddenly no longer rhetorical. “No?” Levis says. “No? No, hunh? No.” This nod to wit changes the mood of the poem in a way that evokes James Wright’s curt dismissal in “Two Hangovers”: “Ah, turn it off,” while the momentary back-and-forth as Levis repeats and confirms the reply—No. No?—drags the reply out to five beats, just long enough that there’s time to absorb it, without moving past the abruptness of the turn-down.

But the book is full of sentimental moments as well. Take, for example, “Elegy For The Infinite Wrapped In Tinfoil,” a single stanza that begins with cinematic visual attention: “His face itself a motionless white flame[.]” From here, the poem pans out to the scene: the boy on a bus has smoked “half a gram of crystal,” and is fleeing the scene of his arson, and the poem intuits what the boy felt in a passage as it moves into reverie. The arsonist “felt he glided

There alone past eaves & lawns that flowed
Beside him then as if he’d loosened them
From every mooring but brimming moonlight [.]

The circumstances balance the sentiment, making the poem somehow bittersweet, and when we return finally to here-and-now, the boy has been delivered to a prison farm.

If humor offers a way of coping with the self-consciousness of sentiment, one of the great tropes of Levis’ work is that jokes often spiral out of control into tragedy, as when Levis asserts, “The fire in the hotel had begun as nothing more/Than the prank of a child who’d gotten high, after school” in “Poem Ending With A Hotel On Fire.”

Levis constantly grapples with guilt: survivor’s guilt, and a kind of guilt of sensitivity, as if exploring one’s vulnerabilities thoughtfully is an indulgence, a discomfort. But Levis’ glorious sense of story and image is on full display throughout The Darkening Trapeze. The lovely “Ocean Park #17, 1968: Homage To Diebenkorn” an ekphrasis of Diebenkorn’s oil painting, opens with a first-person scene that could have been lifted from film noir as easily as from Levis’ own life:

What I remember is a carhop on Pico hurrying
Toward a blue Chevy,
A crucifix dangling from its rearview mirror
That jiggled as the driver brushed
A revolver against it, in passing, before tucking it
Behind his back & beginning to joke with her.

What I remember
Is the smooth arc the gun made & the way
Jesus shimmied to the rhythm.

Many of Levis’ poems are comprised of majestic lines that sweep readers adrift in a sea of story, but here time is clipped short, the lines enjamb and suspend each thought so the scene assembles piece by piece, focusing on the carhop, then the car, then the crucifix, then the gun, and finally, back to the crucifix. The lines move from the man with the gun to the painting and back, until finally the poem ends where it seemed to be going all along, to the beach. “The entwined limbs of lovers & the cold wave’s sprawl” tie together the potential deadliness of everything that has come before.

The book closes with “God Is Always 17.” Opening, “This is the last poem in the book,” it makes a suitable ending because it sweeps the book’s numerous disparate elements—its confessions and addictions, its blazing fires and tragic family disconnections—together. The poem features a car crash, a fire, and a shipment of meth but ends with Levis, with his son in a music store, “wondering what was going to become of us.”

The Darkening Trapeze concludes Levis’ body of work with grace. His poems rely on the momentum and tension that comes from piling one thing on top of another; they offer surprising juxtapositions and reveal new insights in ordinary things. But Levis takes an impulse to list and he expands each item to the size of an anecdote, so we end up instead with epic anecdotes that cross and compete, blending and threatening to contradict each other, but always with such deftness that we follow each story to its conclusion. Levis never drops a thread, though his every labor, every story leaves him—and readers—wondering what will become of us.