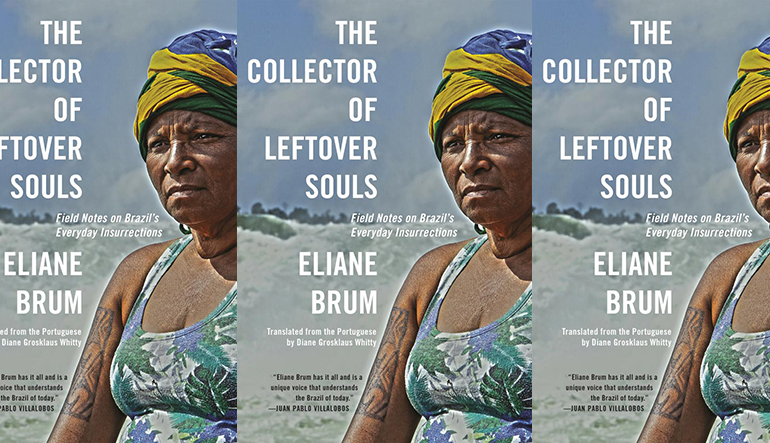 In a sweeping collection committed to making the voice of the Other heard, Eliane Brum is not only a journalist but an anthropologist. Her journalism reveals not merely a story, but the human life within the story. The Collector of Leftover Souls, translated from the Portuguese by Diane Grosklaus Whitty, opens Brum’s field work in Brazil to English-speaking readers for the first time. In the introduction, titled “Between Worlds,” Brum says of her journalistic voice, “My challenge was to remain a foreigner in order to maintain an eye of astonishment, essential to seeing a layer beyond the obvious.” And she does this in each of the articles in this book, her goal being to give to readers the voices and perspectives of the people she interviews.

Perhaps most striking in Brum’s work is her prose. In her introduction, she states, “It’s only a joy to be a reporter when we surrender to the story and let it turn us inside out.” In the opening story, “Forest of Midwives,” Brum foregrounds the voices of the midwives who traverse the Amazon forests in the state of Amapá with an eye that penetrates the mystery that is this mostly unknown group of matriarchs: “Amapá has fewer than half a million inhabitants, and most of them made their debut into the world through the hands of seven hundred baby catchers. These are women who conjugate their verbs in the plural, who wear out collective pronouns. In the logic of their lives, ‘I’ is an outsider who enjoys no special privileges.” By entering into the lives of midwives in the Amazon, the story of men and women all but destroyed by companies that seek economic profit at the expense of human health and livelihood, the world of the favela, a home for the elderly, and the living space of a woman with a fatal prognosis, Brum asks readers to identify with the humanity she reveals in each of her subjects.

Brum’s collection shows the dance that occurs between a journalist and her subjects in the course of their shared conversations. Her writing is an exercise in compassion in its truest form—she’s willing to “suffer with” and to reveal the suffering of both her subjects and herself. Readers are not spared the painful details. In “The Noise,” which highlights the story of a man dying from a lifetime of exposure to asbestos through his factory job, Brum details her encounter with this sickly man—called T.— in the intimate space of his home. Upon hearing the rattling sound that his labored breathing makes, Brum records her own reaction: “The atmosphere overwhelmed me, crushing me in a stifling paralysis. Going against my firm belief that silence must be tolerated in order to hear the Other, I asked a reckless question, in a voice louder than I would have liked.” Brum’s self-described foibles during this conversation lead to a dynamic conversation which ends in T.’s declaration: “‘I am made of asbestos.’” The drama of this piece comes not only from the injustice of T.’s condition— a death sentence knowingly given to him by his employer—but also by the fact that both Brum and T. must struggle with the question, “And what if there is no justice?”

In “João Asks Raimunda to Die with Him in Sacrifice,” Brum sets the article into three acts to artistically demonstrate the tragedy that has been João and Raimunda’s existence: having their land forcibly taken from them by a hydroelectric company looking to turn a profit. Brum is not afraid, as she says, to “get involved with [her] sources,” to enter their lives and stories more fully in order to more fully reveal them.

It is clear that one of Brum’s goals is to tell stories for the purpose of enacting change. Sometimes the change is in behavior (e.g., we need to be careful with the natural resources the untouched parts of the Amazon afford). Sometimes the change is one of attitude: in “Old Folks Home,” Brum spends time with the residents of a philanthropic house, opening to readers a world of loneliness and relative isolation through the voices of some of these vulnerable and marginalized members of society. One resident remarks, “‘I didn’t want to say goodbye to my house….Since then, I’ve been living with what’s left.’” Brum follows up on what the residents say with her own interpretation of what’s been related to her: “They arrived at the gate with the scraps of their dignity, their suitcases filled with their most cherished odds and ends, like pictures from their youth…the days when the reins of life lay in their hands—hands that didn’t fail them while gripping the balustrade.”

In the title story, “The Collector of Leftover Souls,” Brum introduces readers to a hoarder, who picks up scraps of human lives from all over the city and stores them in his house: “Number 81 Bagé Street is the castle of a man who has invented a world without leftovers. By assigning value to things that have none . . . Oscar Kulemkamp salvages his own.” In a certain sense, Brum does the same. In believing that every person’s story is of value, she is able to go where other reporters do not, to see what they cannot. In the last story in this collection, Brum spends time with Ailce de Olivera Souza, a woman who is dying from cancer. In accompanying Ailce more as a caregiver than a reporter, Brum not only transforms how she sees Ailce, but how readers see her as well. In confirming the humanity of those whom we might easily overlook, Brum’s writing is a call to greater awareness of the lives around us.

Eliane Brum’s The Collector of Leftover Souls is both reportage and a challenge to those of us living lives of comfort and privilege. She asks us to step out of our worlds, to join her in her quest of becoming an “intimate foreigner” in the lives of others. In the worlds we enter in these stories, our task is to be the reporter Brum strives to be: one who mostly listens.