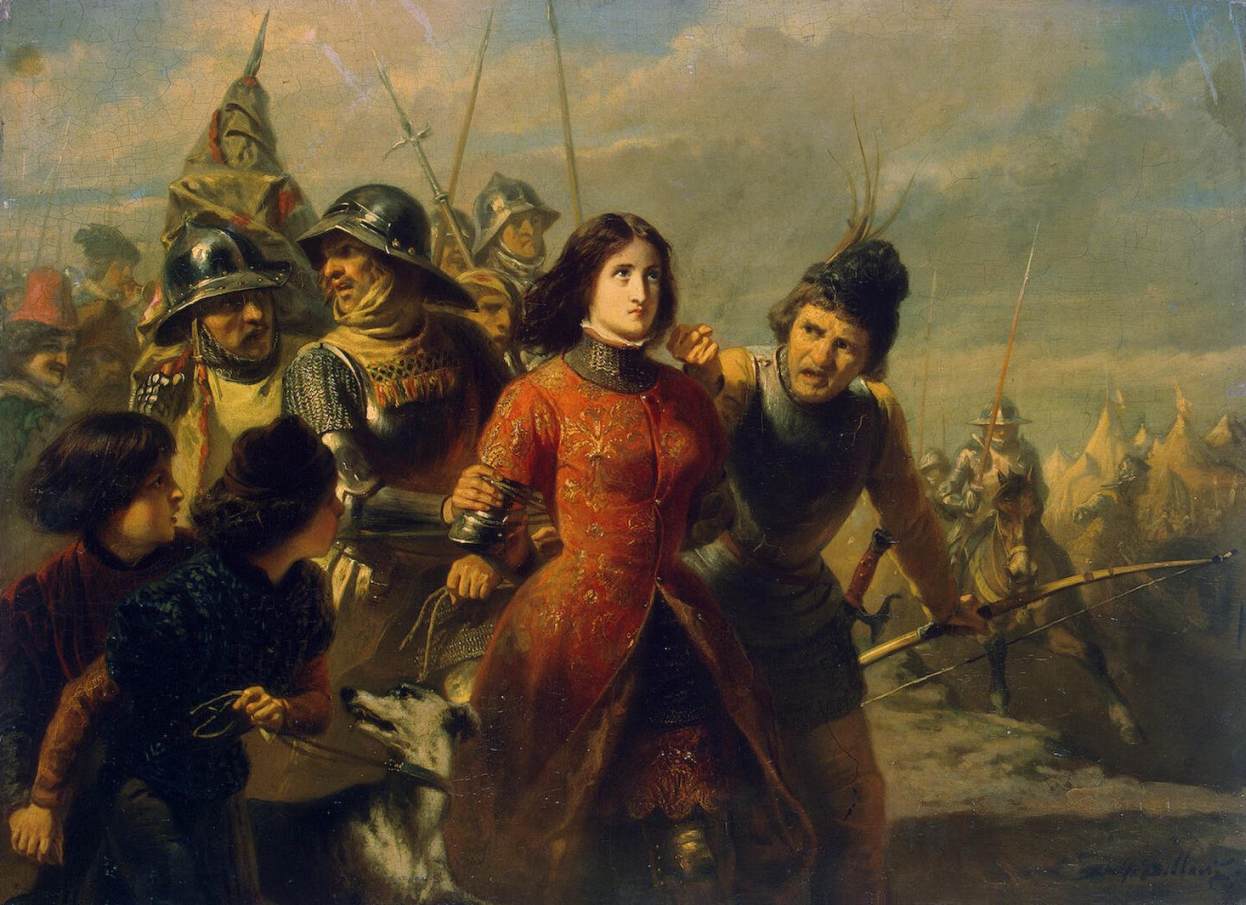 Before Lady Macbeth took center stage as Shakespeare’s leading femme fatale, the bard experimented with a number of scheming women, most notably in his first works, the trio of history plays covering the tumultuous reign of Henry VI. The scheming women in these plays are all known historical figures: Joan la Pucelle (more commonly known as Joan of Arc), Margaret of Anjou (queen to Henry VI), and Eleanor Duchess of Gloucester. Each of these women possessed a significant amount of power in their time and were perceived as showing ambition for further power. Shakespeare’s depictions of these women as sexualized, unfeminine, and/or in concert with malevolent occult forces reveals the suspicion and scorn with which powerful (and, arguably, power-hungry) women were viewed. Written and performed towards the end of Queen Elizabeth I’s reign, these plays underpin the prevailing attitudes of the time and the careful line Elizabeth walked as a female monarch.

At the risk of too strongly emphasizing any anti-woman sentiment in these works, it is worth noting that some of these representations rely on political as much as gendered prejudices. It was convenient, for example, for the English, who burned the teenage Joan of Arc (now a saint) at the stake, to cast her as a wanton harlot in league with devils rather than, as France claimed, a righteous crusader following the voice of God. Whatever the motivations, however, the negative portrayals of these women are constructed with reference to contemporary ideas of an aberrant femininity, distorted by its proximity to power.

Henry VI, Part One—widely regarded as a less successful prequel to parts two and three, and likely written in collaboration with other contemporary playwrights (cases have been put forward for the involvement of both Thomas Nashe and Christopher Marlowe)—portrays the fermenting rivalries during the years of the child king that set the stage for the Wars of the Roses and, more significantly, the loss of various English territories in France through the efforts of Joan of Arc.

Far from the chaste and godly maiden of France, Shakespeare’s Joan is a calculating manipulator who exerts influence over the French Dauphin (later King Charles VII) through her sexuality. From the outset, Joan’s character is bold and self-aggrandizing. In her first meeting with Charles, she exclaims: “My courage try by combat, if thou darest, / And thou shalt find that I exceed my sex. / Resolve on this, thou shalt be fortunate, / If thou receive me for thy warlike mate.” Joan’s rejection of her femininity—”I exceed my sex”—and the physical and sexual connotations of her desire to be Charles’s “warlike mate” gesture towards what we are meant to perceive as the true nature of her character: a nature that will be revealed as the play progresses.

Joan’s claims to virtue and to godly purpose are brought into question through various not-so-subtle hints—her intimate proximity to Charles when the French are caught in a state of unreadiness in the night, for example. Her character is then shredded entirely in extraordinary scenes that see her call forth fiends to aid the French in battle: “Cannot my body nor blood-sacrifice / Entreat you to your wonted furtherance? / Then take my soul, my body, soul, and all, / Before that England give the French the foil.” In seeking to leverage her body, blood, and even her soul, Joan is revealed as the very antithesis of the pious maid. This point is driven home at the end of the play, as, seeking to escape death at the hands of the English, Joan shifts her pleas for mercy from grounds of her inherent virtue to those of her growing pregnancy, cataloguing a startling list of potential fathers.

This characterization of Joan of Arc holds most interest as an example of the worst kind of woman that Shakespeare and his contemporaries could conceive of—this woman is unfeminine, overtly sexualized, and in league with devils. She reappears, to different degrees, in the figures of Eleanor Duchess of Gloucester and of Margaret of Anjou in the following parts of the Henry VI plays.

Eleanor and Margaret appear in 2 Henry VI as antagonists in the wider frictions and power plays that plague the King’s court. (The primary focus of this play is the downfall of Henry VI’s uncle and Lord Protector, the Duke of Gloucester—Eleanor’s husband—and the loosening of Henry VI’s grip on power in the face of a divided nobility and popular rebellion.) The relationship between Eleanor and Margaret is one of open animosity. In one exchange, the queen “gives the DUCHESS a box on the ear” and Eleanor responds, “Could I come near your beauty with my nails, / I’d set my ten commandments in your face.” This friction is driven by the positions their husbands hold as King and as Lord Protector, respectively: while the duchess is desperate to keep the power her husband currently enjoys—and, indeed, to gain more—the queen seeks to throw over Gloucester and position Henry VI as king in his own right, free from any protectorship.

The men at the center of this rivalry are notably detached from it, sharing none of the ambition or shrewdness of their wives. Witnessing the fraught exchange between Margaret and Eleanor, the King seeks to console his aunt, the duchess, by brushing off the strike as an accident. Whether he has been fooled by his wife’s innocent demeanor or is merely seeking to smooth over what he perceives as a minor incident, he fails to perceive the seriousness of its underlying cause and the danger it signals. Throughout this play, the King and the Duke of Gloucester act in good faith, while the forces around them—including their wives—manipulate and scheme. Despite the largely negative representations of Eleanor and Margaret, it must be said that they are also capable, intelligent, and strong in a way that their husbands (particularly Henry VI) are not. These characteristics do not, however, shield these women from ruin. Eleanor’s scheming is, in fact, instrumental to her downfall, as well as a precipitating factor in the downfall of her husband.

In Eleanor’s first scene, she entreats her husband, the Duke of Gloucester, to seize on his power and influence to take the crown. When he rebuffs her with the Shakespearean equivalent of a pat on the head, the duchess laments her husband’s lack of ambition and the limitations of her sex, which prevent her from acting in his stead:

Follow I must; I cannot go before,
While Gloucester bears this base and humble mind.
Were I a man, a duke, and next of blood,
I would remove these tedious stumbling-blocks
And smooth my way upon their headless necks.

This ruthless ambition, shrouded in violent imagery, leads Eleanor to take the initiative and act on her own. She consults with sorcerers about the future, asking particularly about the fate of the King and other key players in the English court. Unfortunately, her meeting is discovered, and she is arrested as a traitor. Unlike Joan of Arc’s invocation of the fiends, there is some greater historical truth to this scene: the real Duchess of Gloucester was famously arrested and imprisoned on charges of treasonable necromancy for consulting astrologers who predicted the King’s death.

The magnitude of Eleanor’s presence in what is a relatively short episode at the beginning of 2 Henry VI speaks to the interest Shakespeare had in the character of the scheming woman as the true power behind the throne. This idea was realized in much greater depth in the character of Margaret of Anjou. Margaret appears briefly at the end of 1 Henry VI when she is courted by the Duke of Suffolk for marriage to the English king. Her role expands to become central to parts two and three and is even (completely ahistorically) cameoed in Richard III, underlining the appeal of her character to the writer.

In 2 Henry VI, Margaret is central to the plot to bring down the Duke of Gloucester. Following Eleanor’s arrest, she and a group of nobles lead the King into suspecting his uncle of desiring the throne for himself. In detailing her suspicions to the King, Margaret relies on the perception of her femininity as a cover for her true motives: “The reverent care I bear unto my lord / Made me collect these dangers in the duke. / If it be fond, call it a woman’s fear.” Unlike Eleanor, whose honesty with her husband was largely dismissed as foolish female talk, Margaret leverages her status as a supposedly weak and fearful woman to manipulate the King’s perceptions.

Margaret’s character is brought into further disrepute in this second play through the insinuation of a (likely invented) affair with the Duke of Suffolk. Following his death, she mourns openly, including during a disturbing scene that sees her cradling his severed head and lamenting the loss of his body: “Here may his head lie on my throbbing breast: / But where’s the body that I should embrace?” While the scale of Margaret’s grief may elicit some sympathy, there is something fundamentally unnerving about this conflation of gruesome/tender imagery. Not only is Margaret’s sexuality centralized here—it is also portrayed as unnatural. This sense of her character carries through to 3 Henry VI, which emphasizes her militaristic bearing and abject coldheartedness against her outward femininity.

Henry VI, Part Three has the dubious honor of being Shakespeare’s most battle-filled play. It deals with a series of clashes between Henry VI and the Yorkists seeking to advance their counterclaim to the English throne. Margaret’s role in this is firstly in support of her husband and then in support of her son, whom Henry VI disinherits to appease the Yorkists. Margaret is in many ways a promising leader and strategist—certainly more so than her weak husband, the King—but she is limited by her sex. Despite these limitations, she is a formidable presence at court and at the scene of battle, and utterly ruthless. As the Duke of York accuses, “Women are soft, mild, pitiful and flexible, / Thou stern, obdurate, flinty, rough, remorseless.” Margaret more than earns these harsh words. In an act of intolerable cruelty, she wipes the captured duke’s face with a napkin soaked in the blood of his youngest son while mocking his defeat and his grief. Her actions here are presented as not only wholly unnatural for a woman but also severe and heartless by any standard. This portrayal of ruthlessness is emphasized by the reaction of the Duke of Northumberland, who witnesses her taunts and can barely hold back tears of pity for his adversary. It is in this scene that Margaret earns her famous admonishment, again from the Duke of York, “She-wolf of France, but worse than wolves of France, / Whose tongue more poisons than the adder’s tooth!” (It is worth noting that the real Margaret of Anjou was not actually present at the Battle of Wakefield where this scene unfolds.)

Shakespeare’s early scheming women—Joan of Arc, Eleanor Duchess of Gloucester, and Margaret of Anjou—share a set of overlapping traits. They are each driven by their ambition for ever greater power, which distorts their femininity into something unnatural. In Joan and Eleanor, this is expressed through their turn towards the occult and supernatural. In Margaret, it is seen through her exaggerated cruelty. Joan and Margaret are additionally castigated through references to their supposed sexual appetites and promiscuity. Each of these women covets male power and is demonized for it. Yet, due to this very demonization, these three are some of the most interesting and complex characters in the Henry VI plays.