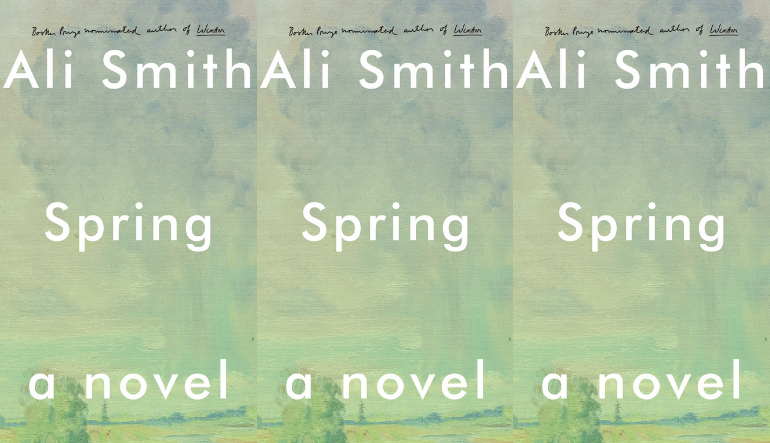 In 2016, British writer Ali Smith set out to write four novels as a quartet—one for each season—presenting and reacting to our contemporary moment. The world she has shown us so far—in Autumn, Winter, and now Spring— is the world we know, consumed with Brexit and Trump and racism and terrorism, the natural world and the making of art creating a resistance against the hourly and daily pressure of current events. Spring, which is, at once, both the most stark and the most hopeful of the series, in fact, begins with three pages of demands ripped from the mouths of the far right. Smith increases font size in places, so certain words jump off the page at us, including the phrase that is perhaps the most important: “the truth is not the truth.” The rant is an assault, and a jolting start to the novel. Certainly not one embedded with hope.

This opening, however, is followed by a short piece that seems to be narrated by the earth or perhaps by spring itself: “What’s giving your world the fresh colours? What’s the key to the song of the bird? What’s forming the beak in the egg? What’s sending the thinnest of green shoots through that rock so the rock starts to split?” The pairing of these two pieces at the beginning of the book introduces the reader to the call-and-response structure that reverberates throughout the novel, the manmade world coming face-to-face with the natural one.

After these introductions, the plot of the novel begins. Richard, an older filmmaker, is mourning the loss of Paddy, his colleague, and closest friend. He is lost without her and is lacking other family, having lost touch with his daughter years earlier. We can feel the expanse of his grief at her death. Richard is meant to be working on a new film based on a novel about Katherine Mansfield and Rainer Maria Rilke, but the filmmakers have sanitized the true story, and he is no longer interested in the project. A true lost soul, the modern equivalent to Shakespeare’s Pericles, he heads to northern Scotland where he considers dying by suicide.

The second section of the book moves back in time, where we meet Brit, a young staffer (a Detention Custody Officer, or DCO) at an immigrant detainee center. We learn the grim reality of what it’s like to work at such a center and, through her eyes, we also learn what it is like to live there. We flinch at how her work has caused her to become caustic and hard. She calls the detainees “deets,” and Smith provides us with lists of what Brit has learned working there:

• How to choose which deets to speak to, and which to ignore

• How to say without thinking much about it, they’re kicking off. We’re not a hotel. If you don’t like it here go home. How dare you ask for a blanket. The day she heard herself say that last one she knew something terrible was happening, but by now the terrible thing, as terrible as a death, felt quite far away.

Brit is conflicted, clearly, but then makes a decision towards the end of the book that most readers will find disappointing but also inevitable. Smith wants us to look squarely at the world of this detention center, and her focus on it is what makes this novel so bleak, so reflective of the world we know.

On her way to work one morning, Brit runs into a twelve-year-old girl, Florence, and suddenly the two of them have taken off on a trip to Scotland, as Florence is desperate—for reasons initially unknown—to get to a place depicted on an old postcard. Brit’s reasons for accompanying Florence are complicated, but her relationship with Florence is nuanced and true, and the dialogue between them sparkles with humor and intelligence.

Hope lives in Florence. She is magic and somehow not of this world, and represents the fresh perspective of an outsider and Smith’s clear belief that our way forward, through the mess of the present, lies with the new and the young. Florence takes on the role of Shakespeare’s Marina to Richard’s Pericles and another echo surfaces: Richard is without his daughter and Florence is seemingly without parents. Florence and Brit end up in the same place with Richard, Florence saves Richard, and then, in the third section of the book, the three of them continue together on their journey, eventually heading their separate ways.

Smith sets the present action of the novel in the fall; the spring appears only towards the end of the novel, when we learn some of what has happened to the three main characters after they split. It is here that Smith brings up the idea of “the unexpected afterlifes,” those things that happen after the end has come, in much the same way that spring follows winter, or an epilogue follows a novel. This idea of the afterlife is also brought up earlier in the book, when Richard goes to see the work of Tacita Dean at the Royal Academy of Arts, and is struck by The Montafon Letter, an enormous work in chalk on blackboard of an avalanche. The artwork references an avalanche in Austria in the seventeenth century that killed three-hundred people, a second avalanche that buried the priest who went to give the sacrament to the dead, and a third avalanche that unburied the priest. Dean has indicated that the work is partially about Brexit and about hope, saying that it represents “hope that the last avalanche will uncover us.” We can see the connection between Dean’s work and Smith’s—Richard’s friend Paddy tells him an abbreviated version of a Dickens story, ending with this summation:

War won’t stop, the story says. But enmity can. Things can change over time, what looks fixed and pinned and closed in a life can change and open, and what’s unchangeable and impossible at one time will be easily possible in another.

To read a book by Smith is to know that she will ask you to do some work, though that work will always be a pleasure and a bit of a game. She will require you to stitch together some of the storylines as she discards the notion of linear time; she will vary the form of the novel (here, including bits of a screenplay, lists, and Twitter rants); and she will have such fun with wordplay and puns that you can feel her pleasure as you read. You will be confused, at times, but the joy of reading Smith is that you know that many of the disparate pieces will make sense by the time the book is completed. Reading Smith’s work for a second time is a true joy, as the raw bits are now knitted together, a whole made out of parts, yet another incarnation of the “unexpected afterlife,” the glimmer of hope and of spring.